Learn more about flooding response and protecting yourself and your family

March 2019 precipitation resulted in flooding across the Midwest. Flooding was prevalent across western Iowa, particularly along the Missouri River and its tributaries. EPA was in immediate contact with all four states affected by the flooding – Nebraska, Iowa, Missouri and Kansas – to offer our assistance and hear what they foresaw as their most critical issues.

Gulliford and EPA staff at a container staging area.Jim Gulliford, EPA Region 7 administrator, Mary Peterson, EPA Region 7 Superfund and Emergency Management Division director, and Scott Hayes, regional incident coordinator for EPA Region 7, got a firsthand look at flood-impacted areas and EPA’s response activities in Iowa and Nebraska on May 20 and 21, 2019.

EPA Region 7 emergency responders have a Federal Emergency Management Agency (FEMA) mission assignment to recover tanks and containers displaced during recent floods in the two states. EPA began response efforts in March and is operating two separate responses in Iowa and Nebraska. As of May 20, EPA had recovered 1,567 containers in Iowa and 1,344 in Nebraska.

Gulliford and EPA staff at a rain-swollen river.Those emergency responders continue to support the two states with hazardous material releases, oil discharges, and drinking and wastewater impacts due to the extreme flooding. Initial EPA response efforts included the review of all Superfund National Priority List sites and water/wastewater plants within the flood zone for health and environmental concerns. EPA Region 7 also checked the status of more than 600 sites that are part of EPA and the states’ hazardous materials compliance and management programs. 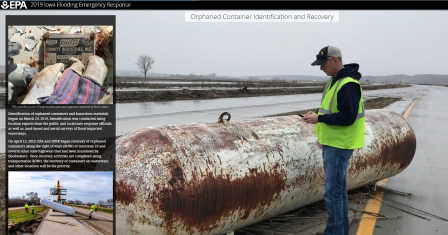 ​What is EPA doing?

What are the next steps?

What can you do to assist during the flood? 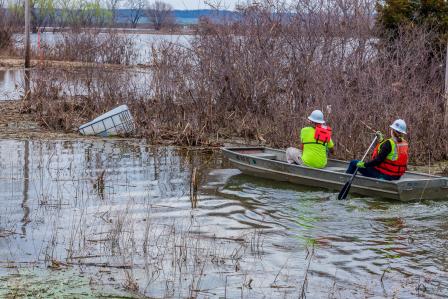 Containers and tanks that floated away with floodwaters and might carry chemicals are a threat to human health and the environment, similar to this tote entangled with shrubs still inundated with floodwater. EPA Region 7 has a Federal Emergency Management Agency mission assignment to first identify and then recover orphan drums, containers and tanks.
Kansas State Government
EPA Web Resources
Centers for Disease Control
National Weather Service

Among EPA’s actions, the Agency responded to the Midwest floods by tracking and monitoring Superfund sites.

EPA identified two Superfund sites affected by the flooding in the Midwest that required actions:

Additional background information is provided on these two sites below.

EPA will continue to work with state and local response and emergency management officials to protect public health and the environment.

EPA has identified two additional sites that had water on the properties but did not require any actions by the Agency or site owners:

Sites Not Impacted by Floodwaters

EPA identified four sites that are not impacted by floodwaters, but have limited access due to flooded roadways. In coordination with our state and local partners, we will continue to monitor the floodwaters and the sites closely in the days ahead. No immediate actions are required at these sites:

EPA remains in daily contact with USACE, which manages treatment operations at the site to ensure protection of human health and the environment. Because the contamination being addressed at the site is in the groundwater, exposure to contamination as a result of floodwater is not expected.

EPA will assess if further action is needed at the conclusion of the flood event.

Additional information about the site is available on its Site Profile Page.

The Conservation Chemical Corporation site is situated within the floodplain of the Missouri River, on the river side of the levee. As such, the site has experienced infrequent flooding previously. During previous flood events, there were no releases of hazardous contaminants from the site.

During this flood event, water is present inside the perimeter fence but remains isolated from, and does not cover, soil above the in-place hazardous waste. Stone riprap is in place around the site to protect against erosion from floodwaters. Because the contamination being addressed at the site is in the groundwater well below the surface, exposure to contamination as a result of floodwater is not expected.

The groundwater extraction system is operating at maximum capacity and has maintained inward gradient during this flood event to ensure that groundwater contamination will not spread.

EPA will assess if further action is needed at the conclusion of the flood event.

Additional information about the site is available on its Site Profile Page.

EPA is operating in the 2019 Nebraska flood zone with federal and state partners. After a request from the Nebraska Department of Health and Human Services (NDHHS) in March 2019, EPA deployed a mobile laboratory and staff to sample private drinking water wells for E. coli contamination. Meanwhile, at Offutt Air Force Base near Omaha, EPA on-scene coordinators have been working with the U.S. Air Force and response officials to prevent a diesel spill from one of the 1-million-gallon diesel fuel tanks that had been inundated by floodwaters. 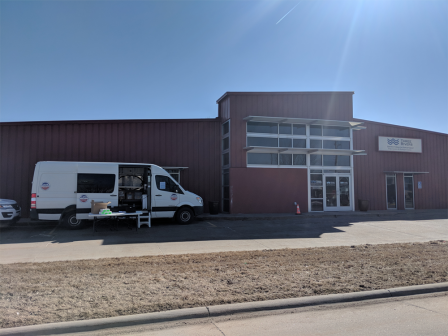 EPA’s ability to respond to state partners’ requests for drinking water sampling assistance is an example of the Agency’s cooperative federalism priority. Working together with the state of Nebraska, EPA will address the citizens’ immediate concerns about private drinking water supplies.

Turnaround time for samples analyzed by both the mobile lab and the Kansas City lab is 24 hours. EPA’s ability to quickly collect and analyze drinking water samples for E. coli plays a critical role in protecting public health during flooding events.

“It’s a true partnership between us and the state of Nebraska and the NDHHS,” Davis said. 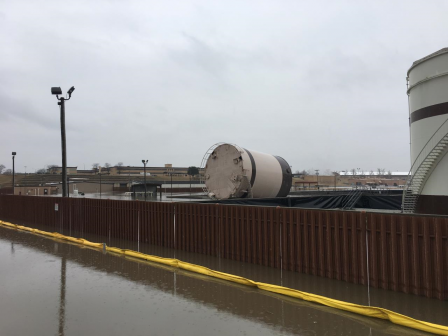 A fuel tank overturns at the Offutt Air Force Base tank farm near Omaha, as a result of floodwaters. The tank was empty at the time, and EPA officials observed no discharge of fuel or oil from any of the tanks.EPA's assistance to Nebraska extends beyond sampling private drinking water supplies. The Agency also deployed two on-scene coordinators (OSCs) to Offutt Air Force Base near Omaha on March 18, in response to a reported oil spill.

At the base, EPA OSCs met with Air Force officials about the flooding and inspected a 1-million-gallon diesel fuel tank containing more than 44,000 gallons of diesel that was listing as a result of high waters. The OSCs oversaw Offutt officials placing 3,400 feet of containment boom around the tank farm and pumping floodwaters from secondary containment areas, in case of a release from one of the fuel tanks.

“The Superfund program stands ready to assist our partners throughout Region 7 when potential releases threaten human health and the environment,” said EPA Region 7 Superfund Division Director Mary Peterson. “Our OSCs worked closely with the Air Force and response officials to ensure that diesel fuel in the tanks remained contained.”

With no release of diesel fuel from the tanks observed at the base, and the containment boom in place along with ongoing pumping of secondary containment areas, the EPA OSCs demobilized and returned to EPA Region 7 Headquarters on March 20. EPA remains ready to assist the base, if a release or threat of release from the tanks requires additional response actions.