In the last year, Nebraska communities have done just that by transforming sights of blight and despair into new entertainment, fitness, and downtown living opportunities.

A site in CozadExitthat once housed the former Rialto Theatre is now home to a new community bandstand. 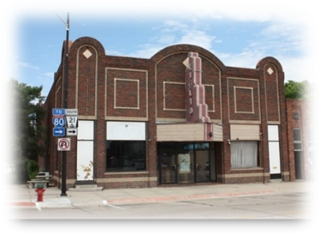 BEFORE: The former Rialto Theatre of Cozad. (Photo courtesy of NDEE.)Built near the turn of the 20th century, the former Rialto served as the community theatre until it was forced to close in 2008. Due to rainwater leaking down the movie screen, a partially caved-in roof, and mold, the vacant structure had become an eyesore in the heart of the city’s commercial district.

Fortunately, city council had a vision to transform the site into a new community bandstand.

With the support of EPA Brownfields funding, the Nebraska Department of Environment and Energy (NDEE) completed a Phase 1 Environmental Site Assessment and Asbestos-Containing Materials Survey to help pave the way for redevelopment.

Additional funds were used to support removal and disposal of asbestos. 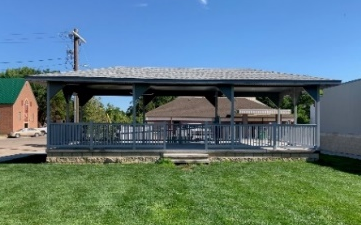 AFTER: Completed community bandstand in Cozad. (Photo courtesy of city of Cozad.)In 2019, the city put their plans into motion and began constructing the new bandstand.

Today, the new space serves as an outdoor community center “where the community can gather for music, entertainment, church services, and socialization with people they don’t get to see every day, yet still be within short walking distance of our downtown shops and local cuisine,” said Jennifer McKeone, executive director of the Cozad Development CorporationExit.

Events of all kinds have been held at the site, including Music Mondays in the summer, Christmas tree contests in the winter, community picnics in the spring, and community church services in the fall.

“Where previously the Rialto Theater was in a state of disuse and disrepair, the bandstand resurrects this dead space and converts it into a place that is still an asset to the public,” McKeone said.

A building In KimballExitthat was once home to the Maginnis Flume Factory is now on its way to becoming the community fitness center.

Near the turn of the century, a local innovator named Patrick Maginnis used the building to manufacture irrigation flumes. 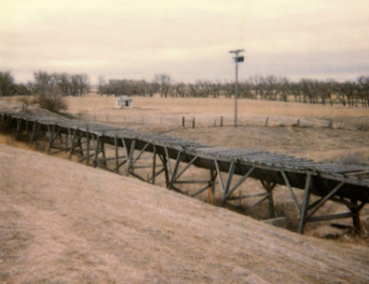 Example of Maginnis Irrigation Flumes manufactured in Kimball by Patrick Maginnis. (Photo courtesy of NDEE.)His patented flumes were exported throughout the region to help transport water across ravines and difficult terrain.

Since the factory closed, the building found new life as the Maginnis Hardware store, the Maginnis Café, and most recently, a steakhouse restaurant. But after sitting vacant for nearly six years without upkeep or care, the building began to fall apart. Like many brownfield sites across America, it became a burden and an eyesore for the community.

Recognizing the historical significance of the site and the positiive economic impact a new business would have on local tax revenue, the city reached out to NDEE for help. EPA Brownfields Section 128(a) funding was used to complete Phase I and Phase II Environmental Site Assessments (ESAs) and a Mold and Asbestos-Containing Materials Survey. And it was used to assist with asbestos removal and disposal costs.

The Maginnis building before it was purchased and redeveloped into a new community fitness center. (Photo courtesy of NDEE.)Once the asbestos was removed and the Phase II ESA revealed no significant environmental concerns, the property was purchased by local business owner Shane Hays.

With the support of nearly $500,000 in local funding, including a grant from the city, Hays is giving the building a much-needed makeover with plans in place to open a new fitness center and three second-floor apartments in fall 2020.

Once completed, this project will not only benefit the health and well-being of Kimball citizens, it will help “modernize downtown Kimball, attracting new businesses and community members,” said Elyse Schlake, coordinator for city of Kimball Economic DevelopmentExit. 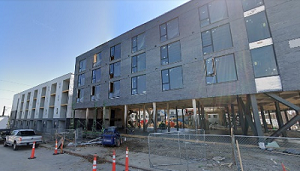 After serving Omahans for nearly a century, the Micklin Lumber & Ace Hardware facility closed and plans were put in place to transform the site into a new student apartment complex, serving Creighton Dental College just two blocks away.

Now, what was once an old industrial corridor is home to the Muse Omaha Apartments, a 240-unit apartment complex and $31 million investment in downtown Omaha.

Thanks to the support of local, state and federal partners, brownfields across Nebraska continue to be recognized as hidden treasures full of untapped potential just waiting to be restored.

“Each successfully completed brownfield project benefits all Nebraskans by increasing the community tax base and property values, attracting businesses and investors, beautifying the communities, removing potential health hazards, and saving green space,” said NDEE Brownfields Coordinator and Voluntary Cleanup Coordinator Taryn Serwatowski. “Remaining brownfields across the state should be looked at as opportunities, not as fruitless obstructions."

“This program has been particularly beneficial to Nebraska’s small and rural communities that didn’t have a sufficient tax base to begin with to address their brownfield properties.”

Since the start of Nebraska’s brownfield and voluntary cleanup program, over 70 properties have been made ready for reuse, resulting in 552 jobs and $120 million in leveraged cleanup and redevelopment for Nebraska communities.

And efforts continue in northwestern Nebraska, where an EPA grant is supporting brownfields assessment work in communities throughout the Nebraska Panhandle.

Recognizing the pivotal role states have when it comes to brownfields redevelopment, EPA provides funding to programs like NDEE’s to support communities, developers and landowners in the assessment, cleanup and redevelopment of brownfield sites.

By working together, these partnerships generally result in “quicker and more cost-effective cleanups, while ensuring protection of public health and the environment,” said Susan Klein, EPA Region 7 brownfields coordinator.