What is an Estuary? 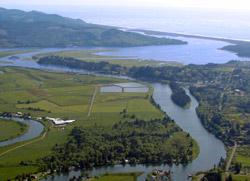 An estuary is a partially enclosed, coastal water body where freshwater from rivers and streams mixes with salt water from the ocean. Estuaries, and their surrounding lands, are places of transition from land to sea. Although influenced by the tides, they are protected from the full force of ocean waves, winds and storms by land forms such as barrier islands or peninsulas.

Estuarine environments are among the most productive on earth, creating more organic matter each year than comparably-sized areas of forest, grassland or agricultural land. The sheltered waters of estuaries also support unique communities of plants and animals specially adapted for life at the margin of the sea.

Why are Estuaries Important? 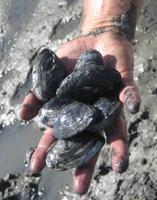 Estuaries provide us with a suite of resources, benefits and services. Some of these can be measured in dollars and cents, while others cannot. Estuaries provide places for recreational activities, scientific study and aesthetic enjoyment. Estuaries are an irreplaceable natural resource that must be managed carefully for the mutual benefit of all who enjoy and depend on them. Below are additional ways in which estuaries are important (click to expand):

How are Estuaries Threatened?

Coastal counties are growing three times faster than counties elsewhere in the nation. Unfortunately, this increasing concentration of people:

What happens on the land affects the quality of the water and health of the organisms that live in an estuary. For example, if a river or stream flows through an agricultural area, it picks up fertilizer, manure and pesticides from farming operations that run off the land after a rainstorm. As it passes urbanized and suburbanized areas, it gathers substances such as: