The Chair of the Board for the Casco Bay Estuary Partnership (CBEP), a City Manager, wrote special appeal letters to harborfront property owners, businesses and the cities of Portland and South Portland. The letters asked for financial support for research to address lobstermen's concerns and keep the harbor dredging project on schedule. In addition, CBEP requested support from the Maine Department of Transportation. Within three weeks, CBEP raised $56,000 to conduct the lobster research and a relocation effort.

Prior to the dredging of Portland Harbor, CBEP used money from this special appeal to study lobster habitat using underwater video surveys of proposed dredge areas. Lobsters were thought to live near the shore in warm weather and move to deep-water burrows offshore in the winter. Therefore, most stakeholders believed that a winter dredging operation would have a minimal impact on lobster populations.

The videos revealed that the harbor provides winter habitat for a significant population of juvenile lobsters that burrow in the Portland harbor mud.

Consultants then developed a dredging mitigation plan that included an innovative lobster relocation effort. Before dredging began, a coalition of lobstermen, state regulators and staff and volunteers from CBEP and Friends of Casco Bay moved 34,012 small lobsters from the dredge area. This group also tagged 4,000 lobsters to help evaluate the project's success. 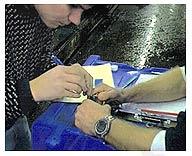 Left: A marine biologist assistant makes a small cut and inserts a tiny metal anchor into the lobster's muscle. The anchor is attached to a tag that has a number matching the information recorded. The tag also has a toll free phone number that lobstermen can call when one of these lobsters gets trapped. This allows the lobsters travel patterns to be recorded.