Benton Harbor, Mich. (October 23, 2020) — Today, U.S. Environmental Protection Agency (EPA) Administrator Andrew Wheeler announced $10.7 million in grants for lead service line replacements in Grand Rapids and Benton Harbor, Michigan. These announcements were part of the first-ever selections under the Water Infrastructure Improvements for the Nation (WIIN) Act’s Reduction in Lead Exposure via Drinking Water, which is providing $39.9 million in grant funding for ten projects across the country to assist school, child care facilities, and drinking water systems in disadvantaged communities with removing sources of lead in drinking water. While in the mitten, Administrator Wheeler and Regional Administrator Kurt Thiede touted continued success in restoring the Great Lakes and new EPA initiatives to support the next generation of the water sector workforce.

“EPA will not forget what happened in Flint regarding lead drinking water contamination, and I’m sure no one in Michigan will forget either,” said EPA Administrator Andrew Wheeler. “That’s why I’m proud to announce EPA funding of two projects in Michigan to replace lead water pipes in economically disadvantaged communities. This is an investment in our children’s future, our economic future, our environmental future, and America’s future.”

“Protecting America’s water resources has been a major priority for this Administration,” said EPA Regional Administrator Kurt Thiede. “We’ve been working hard to protect and cleanup our waters, while at the same time working to ensure our infrastructure is able to provide safe, reliable drinking water— a multi-faceted, holistic approach with a focus from source to tap.”

“In these unprecedented times with so much uncertainty, families should be able to be certain about this: their drinking water is safe for their children, friends, and loved ones,” said U.S. Congressman Fred Upton (MI-06). “Today’s announcement takes an important step to ensuring just that. This is a critically serious issue, and we need to continue to come together to guarantee safe drinking water for southwest Michigan’s communities.”

“Millions of Americans rely on the Great Lakes for drinking water. In addition to protecting the source, investing in our water infrastructure to remove toxins and improve overall water quality must be a priority. I am glad the communities of Benton Harbor and Grand Rapids are striving to modernize their infrastructure and provide safer water to West Michigan residents,” said U.S. Congressman Bill Huizenga (MI-02), Co-Chair of the House Great Lakes Task Force.

“The Great Lakes are an indispensable resource for our state and it is critical to safeguard their long-term health and protect our water quality and way of life,” said U.S. Congressman Tim Walberg (MI-07). “It is encouraging to see ongoing investments at the federal level led by EPA, including the Great Lakes Restoration Initiative, continue to pay dividends for the people of Michigan.”

“Through a collaborative effort with Congress, President Trump and Administrator Wheeler have invested over $900 million in the Great Lakes Restoration Initiative over the past three years," said U.S. Congressman Jack Bergman (MI-01). "This critical funding has made a major impact to clean our waterways, stop invasive species, and restore natural habitat. These continued investments will help ensure that our most treasured natural resources remain the most beautiful place for our kids and grandkids to grow, play, and work.”

Under President Trump, EPA has made significant progress to restore and protect the Great Lakes – the largest surface freshwater system on Earth. Just last month, the Lower Menominee River Area of Concern (AOC) was formally delisted, marking the third delistment in Michigan and first in Wisconsin. All management actions at four Michigan AOCs (St. Marys River, St. Clair River, River Raisin, and Manistique River) are now complete, and EPA has removed 48 Beneficial Use Impairments at 13 of the 14 AOCs in Michigan.

From last year’s competitive nutrient grant offering, EPA selected and funded ten Michigan projects totaling over $4 million. These projects are expected to capture over 8.6 million gallons of stormwater runoff annually and reduce over 1,5000 pounds of phosphorus and 500 tons of sediment from entering the Great Lakes.

Two projects in Michigan were selected in the first round of funding for the Great Lakes Restoration Initiative (GLRI) Trash Free Waters program that are working to clean up beaches in West Michigan and the Detroit River. Over the lifespan of the GLRI, Michigan has received over $704 million for environmental and habitat restoration projects.

Administrator Wheeler also highlighted the updated and aggressive Great Lakes Action Plan III, unveiled in October 2019, that guides the federal family and our many partners over the next five years to protect and restore the Great Lakes – fueling local and regional economies and community revitalization efforts across the basin.

The City of Grand Rapids was selected to receive a $5.1 million grant. This funding will help remove lead service lines and support public engagement on the risks of lead in drinking water to improve public health in Grand Rapids.

The City of Benton Harbor was selected to receive a $5.6 million grant. This funding will help remove lead service lines and support a study to optimize the city’s lead corrosion control treatment to improve public health in Benton Harbor.

Ensuring that all American’s have safe drinking water – including reducing exposure to lead – is a top priority for EPA. Since 2018, EPA has made available more than $69 million to support testing for lead in drinking water at schools and childcare programs and $42.8 million to assist public water systems in underserved, small, and disadvantaged communities meet Safe Drinking Water Act requirements. This year, EPA finalized the “lead-free” rule, which significantly limits the lead content allowed in plumbing materials (e.g., pipes, fittings, and fixtures). EPA also took a significant step towards strengthening the Lead and Cooper Rule by proposing the first major overhaul of the existing rule in nearly 30 years. 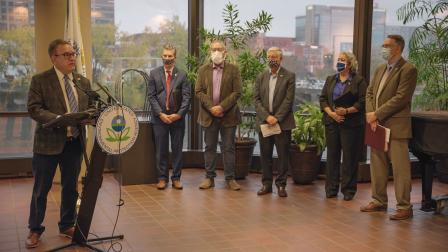 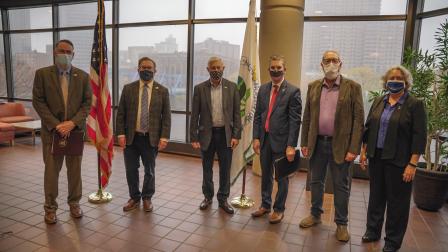 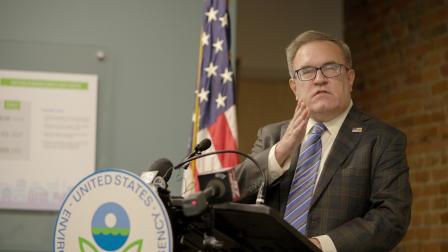 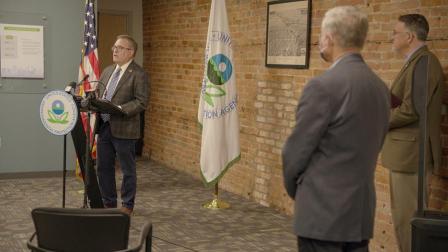