“I’ve had a tremendous visit to Pittsburgh with Deputy Secretary of Energy Menezes and Congressman Reschenthaler. Our tour of a major manufacturer of leak detection equipment showed me how quickly the industry is moving to capture methane on its own, without burdensome regulation. It’s exciting to see America’s natural gas industry leading the world,” said EPA Administrator Andrew Wheeler.

“EPA is proud to have this opportunity to streamline recordkeeping and reporting requirements, help smaller wells remain competitive, and reduce redundancy with  state requirements,” said EPA Mid-Atlantic Regional Administrator Cosmo Servidio. “This will make it easier for industry to introduce innovative technology and harness market incentives to capture fugitive emissions and by doing so, help us all breathe easier.”

While on a tour of Industrial Scientific Corporation’s headquarters, U.S. Department of Energy Deputy Secretary Mark W. Menezes, U.S. Congressman Guy Reschenthaler (PA-14), and Mid-Atlantic Regional Administrator Cosmo Servidio saw the manufacturing center, testing center, and R&D center for real-time monitoring solutions for methane and other gases. They also saw some of the latest technology that is delivering better environmental performances including connected wearable and portable devices that monitor gas for worker safety.

While at the Energy Innovation Center (EIC), Administrator Wheeler, Deputy Secretary Menezes, and Congressman Reschenthaler, toured the facility, which is focused on sustainable workforce development and energy innovation. They saw natural gas powered microturbines, which are increasing overall energy efficiency in electricity generation, and the Electric Power Technologies Laboratory, which focuses on solutions critical to the electric utility industry.

At the press conference that followed the EIC tour, Administrator Wheeler announced two distinct final rules for the oil and natural gas industry that remove ineffective and duplicative requirements while streamlining others. Deputy Secretary of Energy Menezes and Congressman Reschenthaler participated in the press conference as well.

These rulemakings will reduce regulatory burdens for oil and natural gas entities while protecting human health and the environment. Combined, the two final rules are estimated to yield net benefits of $750 to $850 million dollars from 2021 to 2030, the annualized equivalent of about $100 million a year. These final rules combined with other deregulatory actions have saved Americans an estimated $94 billion in unnecessary regulatory costs.

“I applaud Administrator Wheeler for taking decisive action today and continuing to replace the destructive and burdensome bureaucratic policies of the Obama Administration with commonsense policies,” said Deputy Secretary of Energy Mark W. Menezes. “I am proud to join the Administrator in Pennsylvania, a state that will greatly benefit from these actions taken by the EPA today. These new rules will provide relief to American energy companies by reducing the massive cost of complying with unnecessary overregulation from the federal government, allowing them to instead spend their resources on job creation and energy development.”

“As someone born and raised in southwestern Pennsylvania, I have seen firsthand the impact of the natural gas renaissance on our communities, including tremendous job creation and unprecedented wage growth,” said U.S. Congressman Guy Reschenthaler (PA-14). “The rules announced today by Administrator Wheeler will remove burdensome regulations while continuing to provide for cleaner and healthier air. Thank you to the Trump Administration for taking action and for their longstanding commitment to supporting Pennsylvania gas and oil operators, fighting for American energy independence, and fostering economic opportunities for workers and families.”

The first rule, referred to as the “policy package,” determines that the Obama EPA’s addition of the transmission and storage segment was improper and removes it from the regulation while also rescinding emissions standards for that segment. The policy package also makes clear that oil and gas operators will still be required to reduce emissions of ozone-forming volatile organic compounds (VOCs) in the production and processing segment of the industry. The rule removes methane control requirements for the production and processing segments, because the pollution controls used to reduce VOC emissions also reduce methane emissions, making clear that the separate regulation of methane imposed by the 2016 rule was both improper and redundant.

The second rule, referred to as the “technical package” includes commonsense changes to the NSPS that will directly benefit smaller oil and gas operators who rely on straightforward regulatory policy to run their businesses and provide Americans with reliable, affordable energy.

The trip to Pennsylvania comes on the heels of Administrator Wheeler’s trip to Wisconsin where he made a series a series of announcements related to the Superfund program demonstrating the Trump Administration’s continued commitment to the American people to cleanup highly polluted sites across the country. At the Fox River Superfund Site in Green Bay, Administrator Wheeler announced the completion of more than two decades of cleanup with U.S. Congressman Mike Gallagher (WI-08) and the latest updated to the Administrator’s Emphasis List. Administrator Wheeler, alongside U.S. Congressman Bryan Steil (WI-01), announced the 26th WIFIA loan issued under President Trump, which will provide $137 million to the City of Waukesha to ensure access to safer drinking water.

While in Wisconsin on Tuesday, Administrator Wheeler announced the forthcoming delisting of the Lower Menominee River Area of Concern, met with U.S Congressman Glenn Grothman (WI-06) and agricultural partners improving the quality of the Great Lakes, and toured Brownfields redevelopment progress in downtown Green Bay. 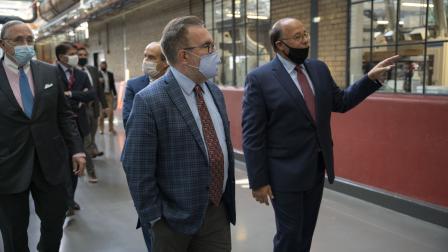