“The 2015 WOTUS Rule greatly expanded Washington’s authority over the nation’s landscape, so much so that many prairie potholes across North Dakota would have likely fallen under federal control,” said EPA Administrator Andrew Wheeler. “Today, I learned firsthand that waters and wetlands in over 90 percent of the state’s land mass would have fallen under federal purview with the 2015 Rule. Because of this type of federal overreach, the Trump Administration repealed the 2015 Rule, and our new proposed WOTUS definition would respect North Dakota’s traditional authority to regulate its land and water resources.”

"Since 1972, government officials and industry leaders have navigated the complexities of the Clean Water Act. After the release of the egregious 2015 WOTUS rule- which the Trump Administration rightfully repealed- North Dakotans did what we often do: step up and take a lead role in fixing it,” said Senator Cramer. “Writing a new rule which works for our farmers, businesses, and local governments is a critical issue- not just for North Dakota- but for our country. I am grateful for the opportunity to discuss redefining WOTUS with the Administrator and to help put North Dakotans in a position to continue leading on this issue.”

“We’ve worked hard to prevent the impacts of the 2015 WOTUS rule, and I appreciate Administrator Wheeler for partnering with us in that effort,” said Senator Hoeven. “North Dakota has some of the cleanest water and air in the nation, showing that we can maintain good environmental stewardship while also supporting a strong economy. We will continue working with the EPA to provide certainty to our farmers, ranchers and energy producers and preserve the role of states in protecting our water resources as the agency drafts a new WOTUS rule.”

“Repealing the unlawful 2015 WOTUS rule was a win for states’ rights and for farmers, landowners and local governments," said Lt. Governor Brent Sanford. "Now, as the EPA works to redefine the rule, we greatly appreciate Administrator Wheeler coming to North Dakota to hear firsthand how a clearly defined WOTUS rule can protect our waters while promoting economic growth, allowing for responsible energy development and recognizing that states are in the best position to manage their own waters in partnership with the federal government.”

This past month, EPA and the U.S. Army Corps of Engineers signed a final rule repealing the 2015 rule that impermissibly expanded the definition of WOTUS. This action was the first step – Step 1 – in a two-step rulemaking process to define the scope of “waters of the United States” that are regulated under the Clean Water Act. This Step 1 action also recodified the longstanding and familiar regulatory text that existed prior to the 2015 Rule –ending a regulatory patchwork that required implementing two competing Clean Water Act regulations creating regulatory uncertainty across the United States.

The final Step 1 rule follows President Trump’s Executive Order 13778, “Restoring the Rule of Law, Federalism, and Economic Growth by Reviewing the ‘Waters of the United States’ Rule.” Section 1 of the Executive Order states that “[i]t is in the national interest to ensure that the Nation’s navigable waters are kept free from pollution, while at the same time promoting economic growth, minimizing regulatory uncertainty, and showing due regard for the roles of Congress and the States under the Constitution.” The Executive Order also directs the EPA and the Department of the Army to review the 2015 Rule for consistency with the policy outlined in Section 1 of the order and to issue a proposed rule rescinding or revising the 2015 Rule as appropriate and consistent with law.

In December 2018, EPA and the Army proposed a new WOTUS definition – Step 2 – that would clearly define where federal jurisdiction begins and ends in accordance with the Clean Water Act and Supreme Court precedent. In the proposal, the agencies provide a clear definition of the difference between federally regulated waterways and those waters that rightfully remain solely under state authority. The agency anticipates finalizing the Step 2 rule this winter.

Additional information is available at: http://www.epa.gov/wotus-rule. 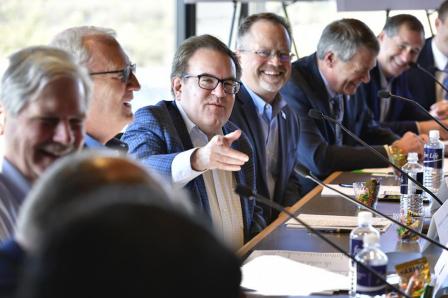