MILWAUKEE (October 11, 2019) – On the heels of the first major update to the Lead and Copper Rule in nearly three decades, Administrator Wheeler hosted a roundtable focused on reducing children’s exposure to lead in drinking water.

“EPA’s proposed update to the Lead and Copper Rule would institute first-ever requirements for community water systems to test school and child care facilities for lead in drinking water,” said EPA Administrator Andrew Wheeler. “From updating the Lead and Copper Rule to finalizing stronger lead-dust standards, the Trump Administration is taking significant steps to protect children, and it is important to hear directly from stakeholders, water systems, and state and local officials on how we can best work together to reduce childhood lead exposure.”

“In 2019, we should not have to worry that kids in Wisconsin or elsewhere in this nation do not have clean drinking water," said U.S. Rep. Bryan Steil (WI-01). "We must do more to protect kids. No child should be exposed to harmful chemicals in their water. Thank you to Administrator Wheeler and the EPA for bringing attention to this issue, especially in Southeast Wisconsin. We must continue working on proactive solutions to keep kids safe and healthy.”

“It was great to see the thoroughness and passion Administrator Wheeler is bringing to the new Lead and Copper Rules. In particular, I appreciate the focus on schools and childcare facilities, which are so frequently in very old buildings,” said U.S. Rep. Glenn Grothman (WI-06).

“As a lifelong pediatrician, children’s health advocate and member of the American Academy of Pediatrics’ Council on Environmental Health, I commend Administrator Wheeler on his efforts to reduce exposure of children to lead in drinking water and in particular, including a national mandate to test lead in drinking water of schools and daycares as part of the new Lead and Copper Rule," said Dr. Beth Neary, Clinical Adjunct Assistant Professor of Pediatrics, University of Wisconsin School of Medicine and Public Health, Wisconsin Environmental Health Network. "Thank you for taking these steps to improve the health of children.”

Administrator Wheeler highlighted rulemakings and programs the agency has taken to promote and improve children’s health including the recent announcement of the availability of $10 million in rebates upgrade our nation’s school bus engines through the Diesel Emissions Reduction Act, the Trump Administration’s Federal Action Plan to Reduce Childhood Lead Exposure, and the new Lead and Copper Rule proposal. Roundtable participants discussed how the agency can best implement those rulemakings and programs in addition to Milwaukee’s proactive actions to remove full lead service lines at child care facilities and Wisconsin’s use of dollars from its State Revolving Fund to reduce exposure to lead in drinking water.

Following the roundtable, Administrator Wheeler and Rep. Steil visited students from Renaissance School in Racine at the lab in Discovery World where they talked about being good stewards of the Great Lakes.

As part of Children’s Health Month, EPA announced a proposed Lead and Copper Rule that significantly improves the actions that water systems must take to reduce lead in the nation’s drinking water yesterday in Green Bay, Wisc. The agency’s proposal takes a proactive and holistic approach to improving the current rule —from testing to treatment to telling the public about the levels and risks of lead in drinking water. When finalized, this proposal will:

Administrator Wheeler kicked off his midwest swing in Bismark, North Dakota with a “waters of the United States” roundtable discussion with Senator Kevin Cramer and North Dakota state, agriculture and business leaders on Monday afternoon. While in North Dakota, Administrator Wheeler spoke at the EmPower ND Energy Conference, renewed a Memorandum of Understanding with the Interstate Oil and Gas Commission, and announced Fargo’s invitation to apply for the third round of Water Infrastructure Finance and Innovation Act (WIFIA) loan financing with North Dakota Governor Doug Burgum.

Before ending the week in Wisconsin, Administrator Wheeler stopped in Indianapolis, to announce the closing of EPA’s 13th WIFIA loan with Indiana Governor Eric Holcomb. The $436 million WIFIA loan to the Indiana Finance Authority, which includes the largest initial disbursement under WIFIA to date, will help finance 23 drinking water and wastewater infrastructure projects, including 10 projects in rural communities throughout the Hoosier state. With this loan closing, EPA has issued over $3.5 billion in credit assistance through WIFIA loans to help finance over $8 billion in water infrastructure projects and create over 15,000 jobs.

While in Indianapolis, Administrator Wheeler delivered keynote remarks at the Indiana Chamber of Commerce’s Indiana Environmental Conference and toured Citizens Energy Group’s DigIndy project site. The DigIndy project will keep the utility in compliance with a Consent Decree with the EPA, reduce combined sewer overflows, and improve water quality. 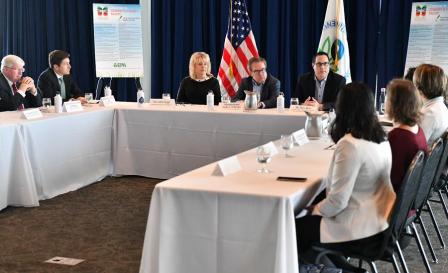 Following the roundtable, Administrator Wheeler and Rep. Steil visited students from Renaissance School in Racine at the lab in Discovery World where they talked about being good stewards of the Great Lakes. 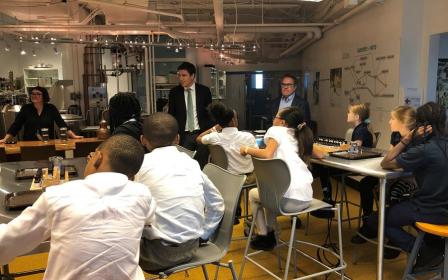 Administrator Wheeler taught the students the acronym HOMES to help them remember the names of all the Great Lakes.