HONOLULU – Under a settlement with the U.S. Environmental Protection Agency (EPA) announced today, the Hawaii State Public Library System (HSPLS) has agreed to close all pollution-causing large-capacity cesspools (LCCs) that it  operates. EPA banned LCCs in 2005, under the federal Safe Drinking Water Act. In an additional, forward-leaning step, HSPLS will also conduct an audit to evaluate whether there are LCCs present at any of its other properties.

“State agencies have a responsibility to ensure that Hawaii’s communities and critical drinking water resources are protected from pollution-causing large capacity cesspools,” said EPA Pacific Southwest Regional Administrator John Busterud. “We want other state and local agencies to follow HSPLS’ approach to identify and close all of their LCCs.”

The Waialua Public Library and Kealakekua Public Library are owned by the Hawaii Department of Land and Natural Resources and operated by HSPLS. EPA inspectors found that HSPLS failed to close one LCC at both locations. At both public libraries, the restroom facilities serve staff members and library patrons. The operator has agreed to pay a $143,990 penalty, close the cesspools within 18 months, and conduct the self-audit.

With this audit HSPLS will assess whether all owned or leased properties are connected to a sanitary sewer system or operate a state permitted compliant septic system. This effort furthers EPA’s goal of closing LCCs in Hawaii while incentivizing voluntary disclosure of additional LCCs on HSPLS properties.

Since the 2005 LCC ban, more than 3,600 LCCs in Hawaii have been closed; however, many hundreds remain in operation. Cesspools collect and discharge untreated raw sewage into the ground, where disease-causing pathogens and harmful chemicals can contaminate groundwater, streams, and the ocean. Groundwater provides 95% of all domestic water in Hawaii.

In 2017, the state of Hawaii passed Act 125, which requires the replacement of all cesspools by 2050. It is estimated that there are approximately 88,000 cesspools in Hawaii. A state income tax credit is available for upgrading qualified cesspools to a septic system or aerobic treatment unit or connecting them to a sewer. The tax credit ends on December 31, 2020. 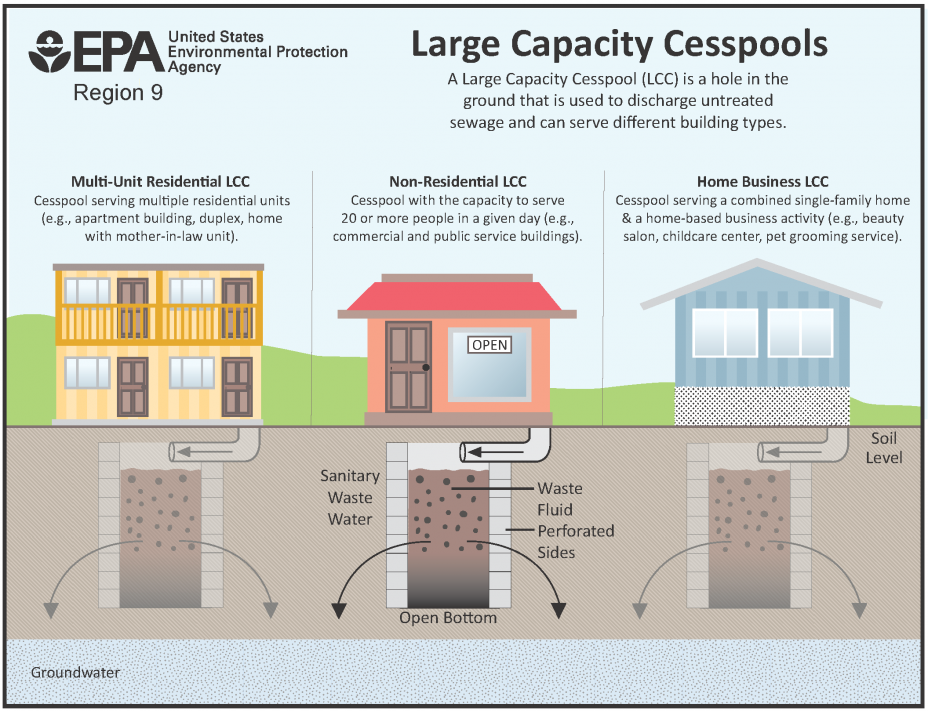 Information on how to self-disclose potential large-capacity cesspool violations is available at: https://19january2021snapshot.epa.gov/compliance/epas-edisclosure.

For more information on these agreements visit: https://19january2021snapshot.epa.gov/uic/hawaii-cesspool-administrative-orders.