The President’s Environmental Youth Award (PEYA) recognizes outstanding environmental projects by K-12 youth. The PEYA program promotes awareness of our nation's natural resources and encourages positive community involvement. Since 1971, the President of the United States has joined with EPA to recognize young people for protecting our nation's air, water, land, and ecology. It is one of the most important ways EPA and the Administration demonstrate commitment to environmental stewardship efforts created and conducted by our nation's youth.

Each year the PEYA program honors a wide variety of projects developed by young individuals, school classes (kindergarten through high school), summer camps, public interest groups, and youth organizations to promote environmental awareness. Evaluation results consistently demonstrate that participation in the PEYA program is frequently a life-changing experience for many of the young people and their project sponsors.

The Green Club set goals for their project:

--reduce the amount of waste generated at the school during lunch;

--spread kindness and beautify their community;

--teach students about gardening and plants; and

--make the planet a better place to live.

The students performed a waste audit and did extensive research. To reduce the amount of trash produced at school, they installed worm bins (built by a local community business) to compost the food scraps from their cafeteria.  The students also convinced the school’s food service provider to switch from “sporks” to metal-ware to limit the amount of plastic that ends up in the ocean.  Since the school already used a dishwasher and reusable trays, the change to metal-ware made economic sense.

The students took on leadership roles throughout the project by being responsible for the monitoring and dumping of the food scraps in the compost bin since the beginning of the project.  The next step was to start growing a school garden using the soil created by the worms.  In planting the garden, they purposefully included flowers in the garden rather than only just growing edible plants.  The students grew flowers to make flower arrangements to spread kindness to a local retirement community.  By last June they were growing snapdragons, potatoes, tulips, dahlias, artichokes and many other plants and edibles.  Students learned how to make flower arrangements from a local florist.

The student leaders of the club help train other students in gardening, composting, and the school recycling program.  The teachers and students have been inspired to start composting at home.  This project helped the Broad View Elementary School be recognized as a 2018 U.S. Department of Education Green Ribbon School, and the Oak Harbor School District is being recognized in 2019 as a Department of Education Green Ribbon School District.

The students have more plans: planting more trees, creating a native garden, getting more irrigation to support the native plant garden, and possibly expand the food and flower gardens.

When he was only 9 years old Hunter Bren founded the organization, Deer Creek Nature, Inc. in the aftermath of the Beaver Creek Fire in 2013. The fire almost destroyed his home while decimating over 114,000 acres of the Sawtooth National Forest. After the fire, there was an unanswered need for research and restoration of the land. Hunter got together experts like employees from the Forest Service and the Fish and Wildlife Service to help answer his questions. He found community volunteers to help in the restoration and created a non-profit to restore the land and educate youth.

Hunter has since spent spring and summer holidays removing thousands of invasive species and planted over 1,000 native plants and collected data on the recovery of the fire. Hunter has successfully helped in rebuilding of natural habitats that now harbor new wildlife. In 2016, he created a summer ecological program for youth interested in learning how to protect the ecosystem, which over 20 students have attended.  Hunter recruited seven volunteers and found financial sponsors to cover the program’s basic costs.  He has also leveraged his impact through the power of storytelling and won an award for his first short story, “Nature Calls” which was published in 2018 in the Skipping Stones Magazine.

Ashwin is a lifelong birder and has spent many hours at the Fernhill Wetlands.  When Oregon’s Clean Water Services undertook a massive habitat restoration project, Ashwin was very interested in how it affected the birds at Fernhill.  He was interested in developing an inexpensive and reusable methodology to quantitatively correlate physical changes in the environment with bird population changes.  He partnered with organizations to combine satellite, climate, and community science data to analyze the impact of habitat change to avian populations at Fernhill.  His work validated several original assumptions made during the design of the Fernhill restoration and revealed several previously unobserved and unexpected effects of the habitat restoration on several species.

The methodology Ashwin developed for his study can be used by wildlife refuge managers to help guide other habitat modifications. He has presented his research at several conferences and contributed valuable data to track changes in bird distribution, invasive species, and migratory behavior for community science projects. Ashwin recently initiated the Go Native Project for which he is recruiting volunteers to raise awareness and promote the use of native plant species in urban landscapes.

BEEeducated started as a small group of students from the International Community School who were passionate about the environment and saving the rapidly declining bee pollination. Seeing how critical pollinators are for their ecosystem and economy, the students wanted to support them by planting pollinator gardens, fulfilling the National Pollinator Garden Network’s goal of one million pollinator gardens. The mission of the group is to empower youth to work with their communities to help bees thrive once again.

The group’s first project was planting a sustainable pollinator garden at Ebright Park with Washington Native Plant Stewards.  From there, the students created a launch kit with a list of steps and resources to help other schools plant pollinator gardens at their own schools. Recently, the group collaborated with MIT developers on an app dedicated to raising awareness about the plight of bees. The app was sent to over 700 donors and has been downloaded over 300 times nationwide, creating a measured impact of over 1,000 people.

The students are now working with six King County schools to establish pollinator gardens. For example, one school can reduce its waste by establishing a pollinator garden, sending food scraps to a composting facility, and using their free compost to enhance the nutrients in the soil, and thus creating an environment more conducive to the growth of pollinator flowers.

The Presidential Innovation Award for Environmental Educators recognizes outstanding kindergarten through grade 12 teachers who employ innovative approaches to environmental education and use the environment as a context for learning for their students. Up to two teachers from each of EPA's 10 regions, from different states, will be selected to receive this award. The White House Council on Environmental Quality (CEQ), in partnership with EPA, administers this award to honor, support and encourage educators who incorporate environmental education in their classrooms and teaching methods.

Anne and the other winning teachers were invited to attend this month’s EPA national award ceremony in Washington, DC. At the national award ceremony, the teacher awardees received a Presidential award plaque and an award of up to $2,500 to be used to further their professional development in environmental education.   Also, the teachers’ schools will receive an award of up to $2,500 to fund environmental education activities and programs.

Here are some excerpts from Ms. McHugh’s award nomination.

--Ms. McHugh’s goal is for K-12 students to participate in authentic scientific research.

--Her approach develops deep scientific literacy within students, giving them a tool that allows them to interpret information and make decisions across a variety of fields.

--She leverages her professional connections with scientists at NASA and universities, allowing students to participate in classroom-based research collaborating with these research scientists.

--Ms. McHugh has designed curriculum to engage students inside and outside the classroom with the intellectual work of science and the opportunity to experience discovery.

--Anne has developed unique environmental science projects to help her students understand that science is not a collection of facts, but a set of questions yet to be answered. The students learn to think critically and logically through a set of authentic research and engineering design challenges, and by connections with research scientists.

--Students investigated how cyanobacteria respond to their environment;

--Students completed spider inventories in their school yards and learned the role spiders play in ecosystems.

Ms. McHugh also supervises an aquaponics club with students from four area high schools.  Students who started working with her in 2017 are currently leading an effort to publish a scientific manuscript, share their results at professional meetings, (including the state and national Aquaponics Association meetings), and collaborate with other teachers and students.

Ms. McHugh’s award application is replete with examples of her dedication to her students, other students, and teachers.  Following are quotes from support letters.

--The impact Ms. McHugh has had on the environmental education of my 8th grade class (and her high school classes later on), is irreplaceable.  Her passion that pushed us to step out of the average curriculum is what made that school year so memorable for me, and many of the lessons I learned from those years remain important.

--As a middle schooler, my approach to science was merely memorizing chemistry facts and reciting science fair speeches.

--When Ms. McHugh came, she changed all of that.  From the first month, we were out doing a project on biodiversity, collecting bugs from a nearby park and counting the different species we found.  We even used that data to do a surprising amount of analysis on where certain species are found within that ecosystem.  While learning about ecosystem biology, the hands-on experience allowed us to develop collaborative and research skills at a relatively young age.

--We also did a long-term research project on aquaponics. From January to May, the entire class worked to build tank systems, lighting structures, and grow beds. In March, we introduced fish ad seedling plants to the system and then started collecting data. Throughout the process, we learned about human body systems, bacteria in water systems, the nitrogen cycle, and so many other concepts that tied in to the real-world example we had in front of us. This project is still ongoing today.

--Ms. McHugh was the one who taught me how exciting science can be, and she is the sole reason I am pursuing science as a career today.

--Obstacles motivate Anne, and she transfers that philosophy to her students.  Reluctant learners who don’t see themselves as scientists become active in Anne’s projects and find that they are engaging in authentic problem solving, generating real data about real issues.  Anne’s students do not ask “When in life will I ever use this learning?” because they become aware that they are applying their knowledge to the real world around them already.  Most notably, some even recognize a pathway in the sciences that had not felt accessible to them before.  (Like her former student who had I just talked about)

--The work that Anne has been doing has not only inspired students but is inspiring teachers.  This year, her aquaponics projects expanded to include 400 students and 3 other teachers. We have plans next year to add her aquaponic project to the district curriculum in our Junior level biology class.  This biology curriculum has been co-developed by three school districts, with 17 districts in Oregon using it.

--We have already added her Arthropod Inventory Project to the shared curriculum, which means that nearly one third of the students in the state of Oregon are engaging in this project.

More information on the Presidential Innovation Award for Environmental Educators: 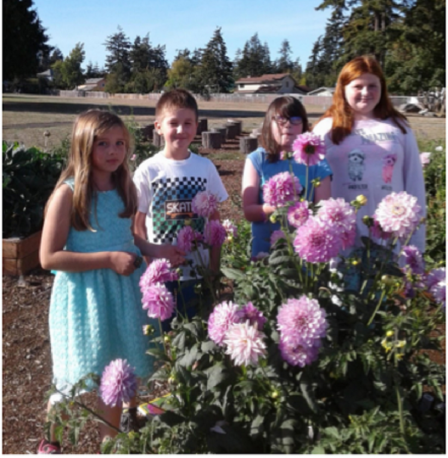 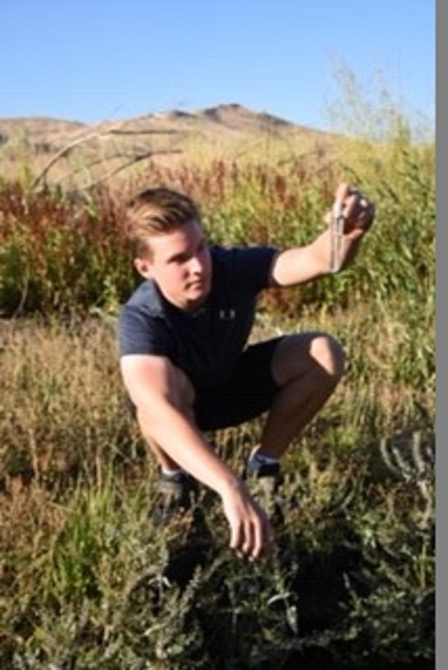 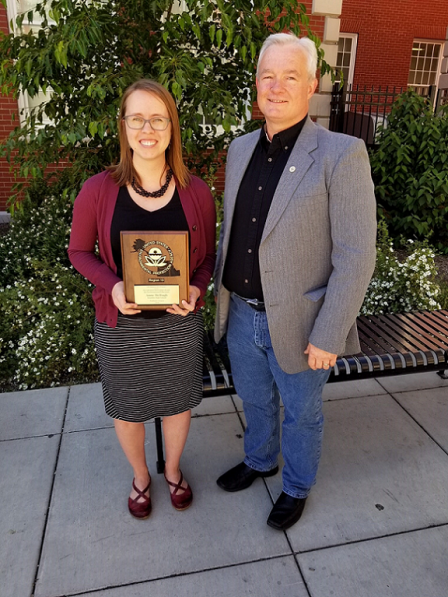