WILMINGTON, MASS. – Within the next two weeks, Olin Corporation (Olin) plans to conduct an aerial survey over the Maple Meadow Brook wetlands in Wilmington. The aerial survey was scheduled to take place the week of November 9, 2020, but may be postponed to the week of November 16, 2020, due to a delay in clearing the survey equipment through the United States/Canadian customs. The purpose of this aerial survey is to gather data to characterize the bedrock beneath the wetlands as part of the ongoing site investigations related to the Olin Chemical Superfund Site.

These investigations, called an Aerial Electromagnetic (AEM) survey, are being conducted in order to better understand the distribution of contamination in the bedrock, both on and around the site.

The AEM survey is being coordinated by Olin with EPA's oversight. The survey will involve flying a helicopter, with a large dipole instrument attached, over the Maple Meadow Brook wetland area (see the graphic and photo attached below). This technology was selected since it is considered the best and safest tool to analyze the wetland area, which is otherwise difficult to access due to high water elevations.

The survey is expected to take approximately two hours of flight time. Olin anticipates the AEM will be completed in one day; however, depending on the quality of results, additional scans may be required. Because of this, Olin has reserved a two to three-day period for backup flights to ensure quality data is collected. The helicopter will travel above the wetland and containment area at an elevation of 150 – 180 feet with the AEM equipment suspended at 100 feet above the ground surface to collect data. The AEM survey is expected to cover an area of 250 acres and consists of flying the instrument in straight lines spaced 100 feet apart. The use of this technology has been approved by EPA. Residents who live nearby may notice an increase in noise while the survey is being conducted, as the helicopter will be flying low in order to collect data. A map of the survey area is provided below.

Olin presented information regarding the AEM survey during the October 26, 2020, Wilmington Board of Selectmen meeting and a recording of the meeting is available on the Wilmington Community Television video on demand webpage (http://wctv.org/video-on-demand/ Exit). Olin will also be placing an informational flyer describing the AEM survey in mailboxes of residents and businesses within the anticipated fly zones. 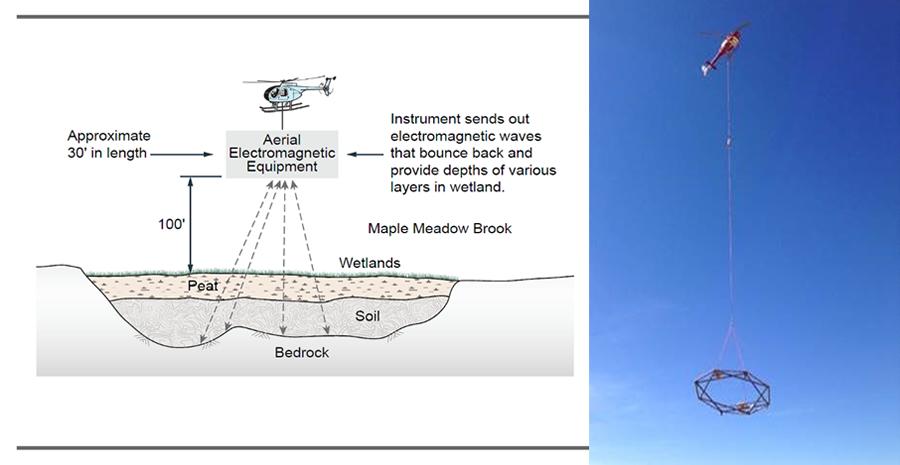