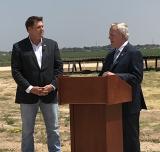 Today’s proposal is the result of EPA’s review of the 2016 New Source Performance Standards (NSPS) for the oil and natural gas industry, which was conducted in response to President Trump’s Executive Order 13783 - Promoting Energy Independence and Economic Growth. That order directs agencies to review existing regulations that potentially “burden the development or use of domestically produced energy resources,” including oil and natural gas. EPA’s regulatory impact analysis estimates that the proposed amendments would save the oil and natural gas industry $17-$19 million a year, for a total of $97-$123 million from 2019 through 2025.

“EPA’s proposal delivers on President Trump’s executive order and removes unnecessary and duplicative regulatory burdens from the oil and gas industry,” said EPA Administrator Andrew Wheeler. “The Trump Administration recognizes that methane is valuable, and the industry has an incentive to minimize leaks and maximize its use. Since 1990, natural gas production in the United States has almost doubled while methane emissions across the natural gas industry have fallen by nearly 15%. Our regulations should not stifle this innovation and progress.”

“Standing here today in Lubbock, it’s clear that community leaders and businesses are counting on us to enact reasonable, responsible rules that protect the health of the community and encourage economic growth,” said EPA Deputy Regional Administrator David Gray. “This proposed action will ensure that communities where oil and gas activities take place, here and across the nation, will continue to thrive.”

“The heart of America’s economic prosperity and unrivaled security is an abundant, affordable, and reliable supply of domestic energy. The energy revolution and, in particular, the innovations in technology we have seen from industry leaders here in West Texas in recent years have advanced our nation’s energy security while creating a significant reduction in carbon emissions. The proposed rule announced today will reduce burdensome regulations and allow for innovation to flourish, empowering our energy producers to continue to lead the way in our nation’s energy dominance, said Congressman Jodey Arrington. “The Obama administration’s midnight rule would have cost hundreds of millions of dollars and thousands of jobs for our small and independent energy producers, and I am encouraged by the broader regulatory reform we are now seeing to bring more jobs and opportunities to energy economies like West Texas. I applaud President Trump and the EPA for finding meaningful ways to steward our environment and leave our nation stronger, freer, safer, and cleaner for our children and grandchildren while providing opportunities for the next generation of energy producers and leaders in West Texas and beyond.”

EPA is co-proposing two actions, both of which would remove unnecessary regulatory duplication in the 2016 rule. In its primary proposal, the agency would remove sources in the transmission and storage segment of the oil and gas industry from regulation. These sources include transmission compressor stations, pneumatic controllers, and underground storage vessels. The agency is proposing that the addition of these sources to the 2016 rule was not appropriate, noting that the agency did not make a separate finding to determine that the emissions from the transmission and storage segment of the industry causes or significantly contributes to air pollution that may endanger public health or welfare.

The primary proposal also would rescind emissions limits for methane, from the production and processing segments of the industry but would keep emissions limits for ozone-forming volatile organic compounds (VOCs). These sources include well completions, pneumatic pumps, pneumatic controllers, gathering and boosting compressors, natural gas processing plants and storage tanks. The controls to reduce VOCs emissions also reduce methane at the same time, so separate methane limitations for that segment of the industry are redundant.

In an alternative proposal, EPA would rescind the methane emissions limitations without removing from regulation any sources from the transmission and storage segment of the industry.

The agency also is seeking comment on alternative interpretations of EPA’s legal authority to regulate pollutants under section 111(b)(1)(A) of the Clean Air Act.

This proposal is in addition to a September 2018 technical action that proposed targeted improvements to help streamline implementation, reduce duplication of EPA and state requirements, and significantly decrease unnecessary burdens on domestic energy producers. EPA is currently reviewing comments received on that technical package and expects to issue a final rule in the upcoming months.

EPA will take comment on the proposal for 60 days after it is published in the Federal Register and will hold a public hearing. Details of the hearing will be announced shortly.

More information, including a pre-publication version of the Federal Register notice and a fact sheet, is available at https://19january2021snapshot.epa.gov/controlling-air-pollution-oil-and-natural-gas-industry