Buffalo, N.Y. - The U.S. Environmental Protection Agency (EPA) has successfully completed response work at the Tonawanda Coke Corporation (TCC) property in the Town of Tonawanda. For nearly 14 months, EPA performed response activities at TCC to secure the coke plant, ensure the continued safety of facility systems, and perform necessary removal activities in order to address releases and potential releases of hazardous substances to the environment.

"The prospects for the Tonawanda Coke site to be utilized in a productive and beneficial manner are outstanding," EPA Regional Administrator Pete Lopez stated. "EPA is pleased to announce that oversight of the Tonawanda Coke Corporation site is ready to be handed back to the state. Working in close partnership with the community, town and NYSDEC, EPA led a comprehensive and complex effort to oversee the safe shutdown of operations." 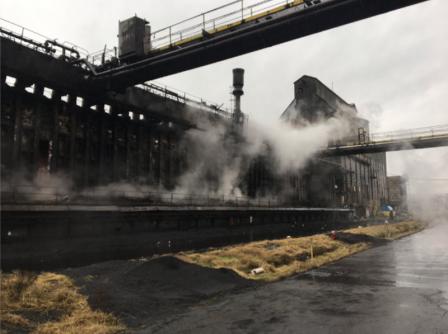 Photo: Courtesy of EPA. The coke oven battery consisting of 60 vertical coke ovens at the former Tonawanda Coke Corporation Site adjacent to the Coal Charging Building. The ovens were deactivated in October 2018.

EPA began a cleanup at the TCC Site in October 2018 when TCC commenced the shutdown of its coke manufacturing facility on River Road. On October 12, 2018, NYSDEC requested that EPA perform response work at the TCC Site to protect the surrounding community.

As lead agency for the assessment and post-shutdown operations, EPA accomplished the following at the former manufacturing plant:

EPA will continue to provide oversight of work being performed by Honeywell International, Inc. under an EPA order at a portion of the TCC facility known as "Site 108." The work under this order is expected to be completed by Honeywell during the Summer of 2020. To date, the following cleanup actions have been completed at Site 108:

The EPA will continue to keep the Town of Tonawanda and local and state partners informed of the Agency's activities and ongoing efforts to protect public health and the environment.

EPA's web site for this facility is https://19january2021snapshot.epa.gov/ny/tonawanda-coke-corporation-tcc-site.