Another action-packed week at the U.S. Environmental Protection Agency (EPA)! EPA Administrator Andrew Wheeler made a big splash in Michigan this week, where he unveiled an aggressive action plan to protect and restore the Great Lakes. The Great Lakes Restoration Initiative (GLRI) Action Plan III will guide the actions of federal agencies and their many partners over the next five years that will fuel local and regional economies and community revitalization efforts across the basin.

While in Michigan, Administrator Wheeler spoke to the Detroit Economic Club about the EPA's priorities under the Trump Administration and met with local high school and college students to discuss important environmental issues and their goals for the future.

Administrator Wheeler also announced that 38 new projects in 18 states are being invited to apply for Water Infrastructure Finance and Innovation Act (WIFIA) loans. Together, the selected borrowers will apply for WIFIA loans totaling approximately $6 billion to help finance over $12 billion in water infrastructure investments and create almost 200,000 jobs.

On the policy front, EPA announced proposed updates to the Worker Protection Standard (WPS) pesticide regulation to improve the long-term success of the agency’s Application Exclusion Zone (AEZ) requirements. The targeted improvements to the AEZ requirements will provide greater workability while continuing to protect farm workers.

This past week, EPA announced the selection of 26 organizations to receive a total of $5.1 million in grants for environmental job training programs across the country. Funded through the agency’s successful Environmental Workforce Development and Job Training Program, these grants help to create a skilled workforce in communities where EPA brownfields assessment and cleanup activities are taking place.

Administrator Wheeler Addresses Great Lakes Threats: "About 40 million Americans rely on the massive lake system for drinking water, and dozens of communities are directly linked to its vitality... Administrator Andrew Wheeler said his plan will target the lakes’ biggest threats by removing toxic substances, algal blooms, and invasive species such as Asian carp. 'We’ve seen a lot of progress that we’ve made over the past 10 years on the EPA Action Plan for the Great Lakes, and we’re committing to a lot more progress,' Wheeler said." (News 10 Albany, 10/22/19) 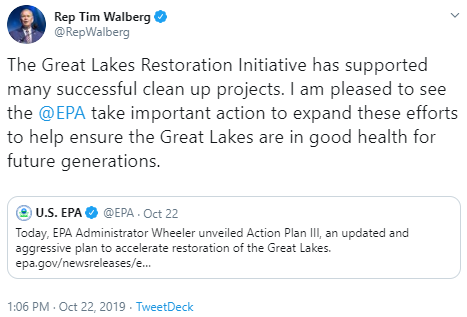 Every Week is Infrastructure Week

On Tuesday, Administrator Andrew Wheeler announced that 38 new projects in 18 states are being invited to apply for Water Infrastructure Finance and Innovation Act (WIFIA) loans. Together, the selected borrowers will apply for WIFIA loans totaling approximately $6 billion to help finance over $12 billion in water infrastructure investments and create almost 200,000 jobs.

Earlier this month, Administrator Wheeler unveiled the proposed Lead and Copper Rule (LCR), which includes a suite of actions to reduce lead exposure in drinking water where it is needed the most. The proposed rule will identify the most at-risk communities and ensure systems have plans in place to rapidly respond by taking actions to reduce elevated levels of lead in drinking water.

"President Trump made a commitment to our farmers to reduce burdensome regulations, and this is another example of him making good on that promise. This action will make it easier for our farmers and growers to comply with the Application Exclusion Zone provisions, providing them with the flexibility to do what they do best - feed, fuel, and clothe the world," said U.S. Secretary of Agriculture Sonny Perdue.

"This is a positive development for our nation’s farmers, farm workers, and their State regulatory partners. Unlike the last administration’s misguided regulations, AEZ is now an enforceable rule that maintains worker protections without additional burden to farmers..." said Congressman Mike Conaway (TX-11).

"Every effort to make the rule more sensible and practical for farmers while safeguarding workers is important... AFBF commends Administrator Wheeler and the agency for this common-sense and welcome revision," said American Farm Bureau Federation President Zippy Duvall.

"I believe these changes, when finalized, will provide much-needed assurance to farmers and applicators, reduce their potential liability, eliminate the loss of useable field edges and still protect human health and the environment," said National Cotton Council Chairman Mike Tate.

"...We are thankful for EPA taking a more realistic and common-sense approach to the AEZ, while making sure our families and employees are safe," said National Sorghum Producers (NSP) Chairman Dan Atkisson. "NSP leadership and its members greatly appreciate EPA’s attention to this issue and consideration of farmers’ perspectives in proposing simplifications to these important rules..."

Tennessee Farm Bureau: "EPA has announced a common-sense approach to the proposed rule for Pesticide Application Exclusion Zones that maintains protections for public health while matching real-life conditions on a farm. Thanks Administrator Wheeler for focusing on public health and listening to farmers!" 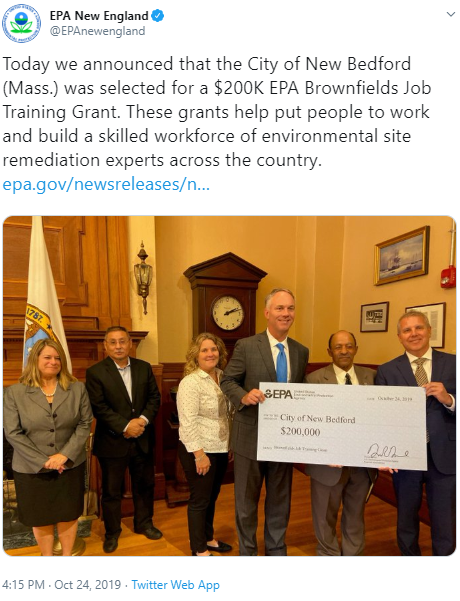 From EPA Region 1: 60 slots open for EPA-funded job training: "Sixty local job-seekers will have the opportunity to train for work in environmental cleanup through a $200,000 grant to the city of New Bedford from the U.S. Environmental Protection Agency... The program will provide 616 hours of instruction in hazardous waste emergency response, de-leading, de-leading supervision, EPA lead safety for renovation, introduction to mold identification and remediation, and more. (The Standard-Times, 10/24/19)

From EPA Region 4: Oak Ridge closes on $20 million loan for new water plant: "'Utility infrastructure upgrades are absolutely essential for Oak Ridge,' Oak Ridge Mayor Warren Gooch said. '... The quality of water for our citizens will improve even more, and the new technology will provide efficient, reliable, and long-term utility operations. This is a major step forward in addressing a critical need for the future of Oak Ridge.' ... The EPA said project construction and operation are expected to create 135 jobs." (Oak Ridge Today, 10/22/19)

From EPA Region 10: EPA grant highlights Brownfield sites in Lake County: "'The Brownfield Project is not just about cleanup of hazardous materials and petroleum, they are also involved in planning after the fact,' said [regional director of South Central Oregon Economic Development District Ginger] Casto. 'Unused sites could be used for things like a new grocery store, or more housing. I am excited that we are getting to this point, now we are at the point where the community can get involved.'" (Herald and News, 10/25/19)

Tweets of the Week 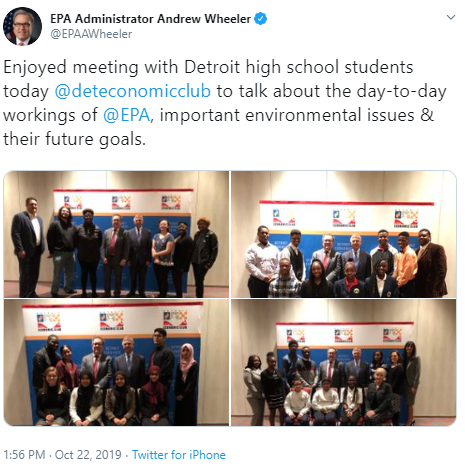