You may need a PDF reader to view some of the files on this page. See EPA’s About PDF page to learn more.
On this page:

View a larger version of this image.On September 24, 2014, EPA Region 1 (EPA) and the Massachusetts Department of Environmental Protection (MassDEP) reissued final National Pollutant Discharge Elimination System (NPDES) permits for seven bulk petroleum storage facilities located along Chelsea River in Chelsea, Revere and East Boston, Massachusetts to meet the requirements of the Clean Water Act. These permits become effective December 1, 2014, pending appeal, and will replace those issued in 2005-2006. EPA also issued a Response to Comments for the seven permits and Environmental Justice Analysis prepared in support of the permitting actions. Further information, including copies of the current, draft and final permits and key supporting documentation, is available on this web site using the links below. Documents may be downloaded and printed using Adobe Acrobat Reader.

View a larger version of this image.The permits seek to address potential adverse impacts to aquatic life, aesthetics, and recreation due to the discharge of stormwater and non-stormwater from these facilities. The permits limit the extent to which petroleum products (e.g., gasoline, ethanol, diesel, kerosene, and fuel oil) or pollutants found in these products come in contact with stormwater during: 1) the unloading or offloading of product at the marine vessel dock; 2) the transfer and storage of product into the bulk storage tanks located within the tank farm; and 3) the off-site distribution of product at the truck loading rack. All of the facilities discharge into Chelsea Creek. In addition, the Global REVCO Terminal also discharges to a tributary leading to Sales Creek. Several facilities (i.e., Chelsea Sandwich, Sunoco Logistics, and Global Petroleum) also have active groundwater remediation systems whose discharges have been incorporated into their current permits.

The final permits, response to comments and supporting documentation for the seven terminals, listed by their respective NPDES permit numbers, are available as follows:

Note: EPA made corrections to Draft Permit MA0004006 for the Total Suspended Solids limit at Outfall 001 (Part I.A.1., page 2) and Monitoring and Reporting requirements (Part I.E., page 24-26). These changes have been made to correct errors in the transcription of limits and requirements established and explained in the Fact Sheet (Section 7.2.2 Total Suspended Solids, pages 14-15 and Section 11. Monitoring, pages 40-41).

Also, EPA terminated the following NPDES permit, issued in 2005 with the majority of permits above: 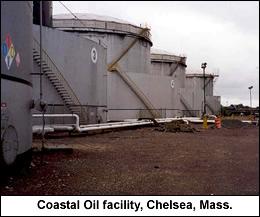 The Coastal Oil facility, which is located in Chelsea, Massachusetts, is engaged in the receipt, storage, and distribution of petroleum products. The product spectrum handled by this facility consists of asphalt, No.2 Fuel Oil, and various product additives. Petroleum products are received in bulk quantities at the marine vessel dock. Product is then transferred to aboveground storage tanks located within the facility’s tank farm. Final distribution of product is conducted at the facility’s truck loading rack. The NPDES discharge is primarily from storm water runoff from pervious and impervious areas at the facility including the tank farm, loading rack, and marine vessel dock. On occasion, the facility may also discharge treated water used in the hydrostatic testing of recently repaired tanks. The storm water and hydrostatic test water discharges are to the Chelsea River through Outfall 001.

EPA was notified through a letter dated May 28, 2004, that the facility is currently inactive and that there have been no petroleum products stored on-site since March 2003. The letter also states that the facility has been put up for sale by Coastal Oil. Coastal Oil is still requesting that their existing NPDES permit be renewed. EPA is planning to re-issue the draft NPDES Permit to the Coastal Oil facility to ensure that the storm water that is being discharged from the inactive facility, continues to be regulated in a manner which is protective of human health and the environment. The re-issuance of the permit will ensure that the most current monitoring conditions and effluent limitations remain in effect. In the event that the property is sold or transferred after the issuance of this NPDES Permit, then the new owner must notify EPA of any changes at the facility and is required to continue to comply with the appropriate sections of the Clean Water Act.

EPA and MassDEP received comments at the public hearing regarding the draft permits as well as comments in writing. EPA responded to significant comments received during the public notice period in the Response to Comments included with each final permit, available above.

Individuals with further questions concerning the Environmental Justice Analysis may contact: Sharon Wells, Office of Civil Rights and Urban Affairs at (617) 918-1007 or wells.sharon@epa.gov. 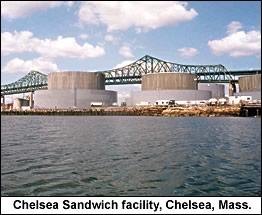 The Chelsea Sandwich facility, which is located in Chelsea, Massachusetts, is engaged in the receipt, storage, and distribution of petroleum products. 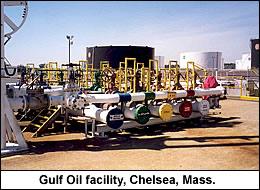 The Gulf Oil facility, which is located in Chelsea, Massachusetts, is engaged in the receipt, storage, and distribution of petroleum products. 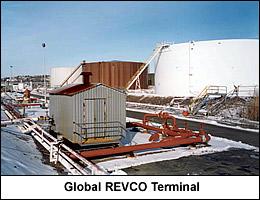 The Global REVCO facility is engaged in the receipt, storage, and distribution of petroleum products. 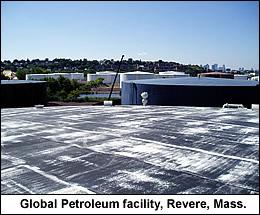 The Global Petroleum facility, which is located in Revere, Massachusetts, is engaged in the receipt, storage, and distribution of petroleum products. 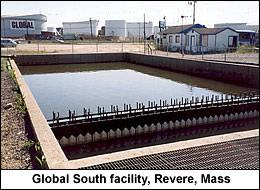 The Global South facility, which is located in Revere, Massachusetts, is primarily engaged in the receipt, storage, and distribution of petroleum products. 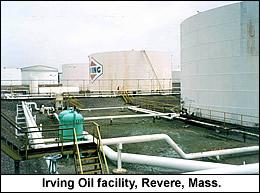 The Irving Oil facility, which is located in Revere, Massachusetts, is engaged in the receipt, storage, and distribution of petroleum products.

A joint public information meeting and public hearing was held in Chelsea, Massachusetts on April 27, 2005 for six of the current permits listed above and the permit terminated for Coastal Oil. EPA prepared a response to comments based on comments received during the public notice period and at the public hearing for these permits. Summaries of the comments and EPA's responses to comments, listed in the document "Chelsea Creek Fuel Terminals Responses to Comments," and additional materials related to the 2005-2006 permits are provided below.