You may need a PDF reader to view some of the files on this page. See EPA's About PDF page to learn more.

The Final Permit authorizes Merrimack Station's discharges of pollutants to, and the withdrawal of water for cooling from, the Merrimack River. Merrimack Station is a coal-burning powerplant located in Bow, New Hampshire. The Facility's pollutant discharges are regulated by EPA technology-based effluent limitation guidelines (ELGs) set under the Clean Water Act for the Steam Electric Power Generating Category of industrial dischargers. See 40 CFR part 423. The Facility's discharges of waste heat and withdrawals of river water for cooling are also subject to statutory and regulatory requirements under the Clean Water Act. See 33 U.S.C. §§ 1311(b)(2), 1326(a) and 1326(b). In addition, these discharges and withdrawal must also satisfy applicable New Hampshire water quality standards. See 33 U.S.C. § 1311(b)(1)(C).

While continuing to work with New Hampshire Department of Environmental Services to reissue the Merrimack Station Final NPDES Permit, EPA has decided to reopen the public comment period for the Merrimack Station Draft NPDES Permit, pursuant to 40 C.F.R. § 124.14(b). EPA is reopening the comment period because, since issuance of the Draft and Revised Draft Permits, new data, information, and arguments pertinent to certain aspects of the permit – including data, information, and arguments related to new EPA regulations applicable to the permit – have emerged and appear to raise substantial new questions concerning the permit. By reopening the comment period, EPA will provide the public an opportunity to comment on the new information, data, and arguments, including those related to the new regulations. In this regard, EPA notes that PSNH has requested that EPA reopen the comment period on multiple occasions, including most recently in a December 22, 2016, letter to EPA. While reopening the comment period means that additional time will be devoted taking public comment, EPA is hopeful that providing for additional public input will yield an improved permit and ultimately save time in the long run.

In accordance with 40 C.F.R. § 124.14(c), the comment period for the Draft Permit is not being reopened "across the board." It is, instead, only being reopened with respect to certain issues. In conjunction with this public notice, EPA has prepared a document entitled, "Statement of Substantial New Questions for Public Comment" (the Statement). The Statement discusses the new data, information (including new regulations), and arguments, that appear to raise substantial new questions and have prompted EPA to reopen the comment period. The Statement also specifies particular records that are at issue. These records are included in EPA's administrative record for the Merrimack Station NPDES permit. The link to the administrative record is found further below on this page. The Statement also identifies substantial new questions that may be at issue, including possible alternative approaches to designing appropriate permit conditions in light of the new information that is at issue.

More specifically, the comment period is being reopened to give the public an opportunity to comment on the following:

EPA has prepared a "Statement of Substantial New Questions for Public Comment" which should be referred to for a complete description of the new questions and possible new conditions for the Merrimack Station draft NPDES Permit that are now subject to public comment during the reopened public comment period. See link below. EPA also is making available through this web site the administrative record, including the documents containing the new information that is a subject of this public comment period.

The Draft Permit for Merrimack Station that was issued September 30, 2011, addressed wastewater discharges from several different aspects of the power plant's operations. One important part of the permit set limits for potential wastewater discharges from the facility's flue gas desulfurization (FGD) air pollution control system. The Draft Permit set limits for this wastewater based on the use of the Station's proposed "primary treatment system" for FGD wastewater, plus the addition of a biological treatment stage. Since issuance of the Draft Permit, Region 1 learned that PSNH had, of its own accord, installed and begun operating not only the primary treatment system, but also an FGD secondary wastewater treatment system (SWWTS) consisting of a falling-film evaporator (or brine concentrator) and forced circulation crystallizers capable of operating as a zero liquid discharge (ZLD) system. Region 1 also received a number of comments on the suitability of VCE for Merrimack Station during the 2011 Draft Permit public comment period and has gathered additional information in response to those comments. After considering all this material in connection with an evaluation of the Best Available Technology (BAT) factors specified in the statute and regulations, Region 1 has concluded on a site-specific basis, based on its Best Professional Judgment (BPJ), that the combined primary and secondary FGD WWTS currently operating at the Facility is the BAT for treating the FGD wastewater generated at Merrimack Station.

The particular provisions of the September 2011 Draft Permit now being reconsidered and revised are the effluent limits and reporting requirements for Outfall 003C at Part I.A.4 and for Outfall 003A at Part I.A.2. Region 1 has prepared a Revised Draft Permit and Fact Sheet that includes certain changes to these provisions from the September 30, 2011, Draft Permit. In addition, the Region has compiled the administrative record associated with this action, which is available at the link near the bottom of this page. (Please note that records after #840 have been added since the Draft Permit was issued September 30, 2011). The Agency is now seeking comment on the Revised Draft Permit provisions as well as on Region 1's analysis supporting the revisions. The Region is providing a two-stage comment period. The first stage is an initial 60 day comment period. The second stage is an added 35 days in order that any interested person may file a written response to the material filed by any other person.

Please note that the initial public comment period for the Revised Draft Permit for Merrimack Station was extended an additional 60 days from June 17, 2014 to August 18, 2014. All persons, including applicants, who believe any condition of the Revised Draft Permit is inappropriate, must raise all issues and submit all available arguments and all supporting material for their arguments in full by August 18, 2014, to the address listed below. In addition, Region 1 extended the additional 35-day comment period by 30 more days during which any interested person may file a written response to the material filed by any other person. This additional comment period begins August 18, 2014 and ends October 22, 2014. Public comments will be added to the Administrative Record in a timely manner to allow for review and response during the additional 65-day period.

Comments Responding to Initial Comments on the Revised Draft Permit 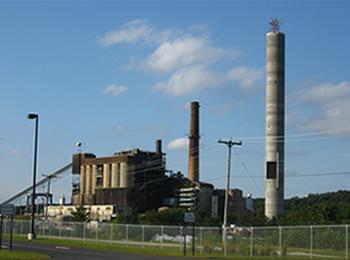 Merrimack StationBackground: EPA and the New Hampshire Department of Environmental Services (NHDES) have issued a new Draft National Pollutant Discharge Elimination System (NPDES) permit for the Merrimack Station power plant in Bow, New Hampshire. The agencies have designed the permit to meet the requirements of federal and state water pollution control laws. Important permit conditions include those addressing the facility's discharges of waste heat to the Merrimack River, its withdrawals of river water for plant cooling needs, and its discharges to the river of mercury, arsenic, selenium and other pollutants.

Merrimack Station is a 470 megawatt (MW), predominantly coal-fired, electrical generation facility owned and operated by Public Service of New Hampshire (PSNH), a corporate subsidiary of The Northeast Utilities System. The facility takes up to 287 million gallons of water per day (MGD) from the Hooksett Pool section of the Merrimack River to use for cooling in its process for generating electricity. The facility also discharges waste heat and other pollutants to the river. More specifically, Merrimack Station burns coal in its boilers to generate steam to drive its electrical generating turbines. It also takes water from the Merrimack River through two intake structures and uses it to condense the steam back to water (i.e., for cooling) so that more steam and electricity can be generated. In the process of condensing steam, the river water absorbs the facility's steam turbine waste heat. This water, carrying the facility's waste heat, is then discharged back to the Hooksett Pool.

This type of cooling system is referred to as an "open-cycle" (or "once-through") system because the water is used for only one cooling cycle before it is discharged to the river. This type of system tends to maximize both the amount of water that must be taken from a water body for cooling and the amount of waste heat discharged to the receiving water. As an alternative to open-cycle systems, closed-cycle cooling systems include technology to chill heated condenser cooling water so that it can be recycled for additional cooling cycles. As a result, closed-cycle systems tend to minimize water withdrawals for condensing steam and discharges of waste heat. 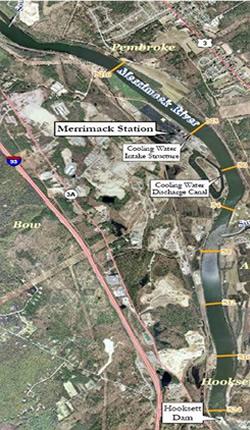 Monitoring Location MapBy raising water temperatures, discharges of heat to a water body (i.e., "thermal discharges") can harm aquatic organisms in many ways. EPA's analysis finds that Merrimack Station's thermal discharges have, indeed, harmed fish in the Hooksett Pool. Data indicates that thermal discharges have contributed to the alteration and depletion of fish populations in the Pool over the last 20 to 30 years. Making matters worse, fish are also killed and injured by the facility's withdrawals of river water for its cooling needs. The water taken from the river contains fish eggs and larvae and these tiny creatures are pulled through the facility's cooling system and killed by exposure to harsh physical impacts, extreme water temperatures and toxic chemicals. This "entrainment" of fish eggs and larvae is a problem from April through August of each year at Merrimack Station because this is the primary period when fish eggs and larvae are found in the Hookset Pool. In addition, withdrawals of river water create a water velocity at the intake pipes that can trap (or "impinge") juvenile and adult fish against the facility's intake screens. The fish caught on the screens may be killed or injured and "impingement" is a year-round concern at Merrimack Station.

Another important issue addressed by the new draft permit is the wastewater discharge expected from Merrimack Station's recently constructed wet flue gas desulfurization (FGD) scrubber system. The wet FGD scrubber system will reduce the facility's emission of air pollutants, such as mercury and sulfur dioxide, but it will also generate a wastewater containing many of these same pollutants. Thus, the discharge of FGD wastewater must be properly controlled.

EPA and the NHDES last reissued Merrimack Station's NPDES permit (Permit No. NH0001465) on June 25, 1992. Originally scheduled to expire on July 27, 1997, the permit has been administratively continued in effect pending reissuance of a new permit.

Major Permit Conditions: Consistent with the requirements of the Clean Water Act, EPA and NHDES have designed the following key permit conditions:

Public Comment: EPA has placed Merrimack Station's Draft Permit on Public Notice from September 30 to November 30, 2011. During the Public Notice period any individual, agency, organization, etc., can submit written comments on the Draft Permit to EPA Region 1. EPA will consider and respond in writing to all timely, significant comments. Summaries of all comments received and EPA's responses to them will be posted at www.epa.gov/npdes-permits/merrimack-station-draft-npdes-permit. EPA will also host a Public Hearing scheduled for November 3, 2011, at NH Dept. of Environmental Services headquarters auditorium starting at 6:30 p.m.