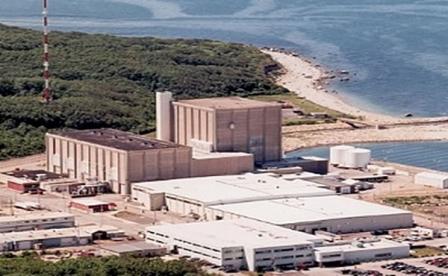 This facility is owned and operated by Entergy Nuclear Generation Company (Entergy). It is a 670 megawatt electricity-generating power plant adjacent to Cape Cod Bay. The facility occupies approximately 140 acres and is located on the western shore of Cape Cod Bay, occupying one mile of continuous shoreline frontage. The facility uses a "once-through" cooling system designed to withdraw, via a cooling water intake structure (CWIS), up to 467 million gallons of seawater per day from Cape Cod Bay to condense steam used in the production of electricity. As a result, the plant discharges heated effluent back into Cape Cod Bay. Commercial operation of the station began in December 1972, when the facility was owned by Boston Edison Company. In 1999, Entergy assumed ownership of the facility.

The Clean Water Act prohibits the discharge of pollutants, including heat, into certain types of water bodies from facilities such as Pilgrim Nuclear Power Station (PNPS), except in conformance with a National Pollutant Discharge Elimination System (NPDES) permit issued by EPA or an authorized state. The Act also requires that the location, design, construction, and capacity of CWISs at such facilities reflect the best technology available for minimizing adverse environmental impact. EPA is the NPDES permitting authority in Massachusetts and last issued a NPDES permit for PNPS in 1991. The 1991 permit regulates the facility's withdrawal of water from Cape Cod Bay for cooling purposes, as well as the discharge of pollutants to Cape Cod Bay through a variety of wastewater streams. Wastewater regulated by the permit consists of heated non-contact cooling water, thermal backwash water for bio-fouling control, intake screen wash water, plant service cooling water, neutralizing sump waste, demineralizer reject water, and station heating water. Stormwater is also discharged from several outfalls at the site.

On Oct. 13, 2015, Entergy announced that it had decided on its own to cease generating electricity at PNPS and permanently shut the plant down by June 1, 2019. Entergy advised EPA that, despite the planned shutdown, some discharges and water withdrawals, though significantly reduced, would continue after shutdown. EPA had been working for some time on re-issuing the NPDES permit for the PNPS and released a draft NPDES permit on May 18, 2016, that took into account Entergy's decision to shut PNPS down. The draft permit proposed conditions that would apply prior to Entergy's shutdown of the plant as well as afterward, as Entergy begins the process of decommissioning PNPS. EPA solicited public comment on the draft permit for two months and held a public hearing on the draft permit on July 21, 2016.

The draft permit contains effluent limitations and conditions for each of the outfalls as well as conditions regarding the water withdrawal through the facility's CWIS. The intake requirements are consistent with a 2014 EPA Rule that regulates CWISs under the Clean Water Act at existing facilities such as Pilgrim. The operation of CWISs can cause or contribute to a variety of adverse environmental effects, such as killing or injuring fish larvae and eggs entrained in the water withdrawn from a water body and sent through the facility's cooling system, or by killing or injuring fish and other organisms by impinging them against the intake structure's screens. In addition, the permit contains thermal discharge limits that are designed to assure the protection and propagation of a balanced, indigenous population of shellfish, fish, and wildlife in and on the water.

Many individuals and groups, including the permittee, submitted comments on the draft permit to EPA. EPA is currently reviewing the comments and preparing responses and a final permit—a process that includes consulting with state and other federal agencies. The facility has shutdown, terminating the generation of electricity, as of May 31, 2019.  EPA expects to issue the Final Permit in 2019.

For any questions, contact the permit writer George Papadopoulos by phone at (617) 918-1579, or by email at papadopoulos.george@epa.gov