What is the concentration of the pollutant leaving the best management practice (BMP) and being discharged into the environment?

Usually measured in milligrams or micrograms per liter (mg/L and ug/L, respectively), this information is necessary for calculating a total load (discussed below) and can be useful, particularly when trying to meet a specific water quality objective.

Why Percent Removal is a Poor Measure of BMP Performance 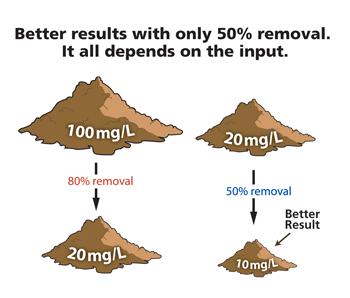 BMP performance should be evaluated over a wide range of real-world conditions, including varying rainfall events, soil types, and land uses. You also should consider the volume reduction potential of any BMP both for its own sake and for its impact on total load reduction of pollutants (see discussion below).

BMP performance varies widely based on location, design, rainfall patterns, surrounding land uses, and monitoring variability among other factors. Nonetheless, outflow concentration information can be useful in comparing classes of BMPs or in investigating the impact of design changes on the overall performance of a particular BMP.

Evaluating the volume reduction potential of a BMP is critical in assessing its overall performance. One of the primary impacts of stormwater is related to the increased volumes of surface runoff that are a direct result of increased impervious surfaces in urbanized watersheds.

Increasing impervious surface in a watershed changes the natural hydrology and increases the amount of water transported in surface flow. These changes can have significant impacts on smaller and medium-sized streams and rivers and the riparian areas that protect them. Streambank erosion, channel deformation and down cutting, and loss of natural habitat are among the more common impacts of increased runoff from impervious surfaces. Choosing BMPs that reduce volumes through infiltration and evapotranspiration can be essential to protecting or restoring watersheds.

Volume reduction also can play a significant role in overall pollutant load reduction, which may not be immediately apparent if concentration numbers are compared. When a BMP, such as a rain garden or bioretention practice, captures a portion of incoming runoff and infiltrates it into the soil, the pollutants in that portion are prevented from entering a nearby river, lake, or coastal water. Simply comparing the concentration in and the concentration out does not account for this reduction in the total load of the pollutant that has been reduced.

How Volume Reduction Can Play a Significant Role in Pollution Reduction

Probably the best way to evaluate overall BMP performance for a particular pollutant is to estimate the total load of the pollutant that might be removed by a BMP. Total load can be calculated using the volume of water that is discharged from the BMP over a given period multiplied by the mean or average concentration of the pollutant. However, most studies do not calculate the total load discharged or reduced. 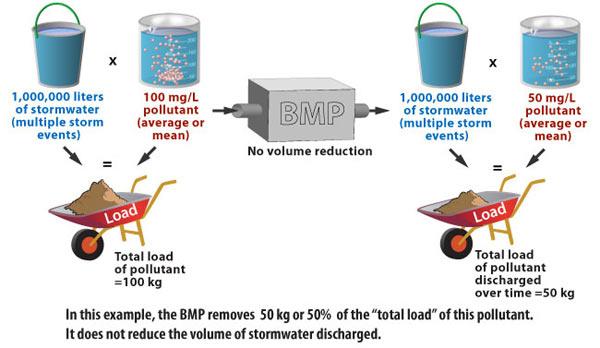 In the example below, the BMP examined reduced the total volume of stormwater discharged by 50 percent. The same 1 million liters comes into the BMP at an average concentration of 100 mg/l, resulting in a total incoming load of 100 kg. This BMP infiltrates 50 percent of the stormwater, so 500,000 liters is discharged into the environment. This BMP also reduces the concentration of the pollutant to 50 mg/l; however, multiplying the reduced volume by the concentration results in a total of 25 kg of the pollutant being discharged. Note that if the effluent concentration values (50 mg/l) were compared or if a "percent removal" were calculated using the incoming and outgoing concentrations, the performance of the BMPs would have appeared equal. 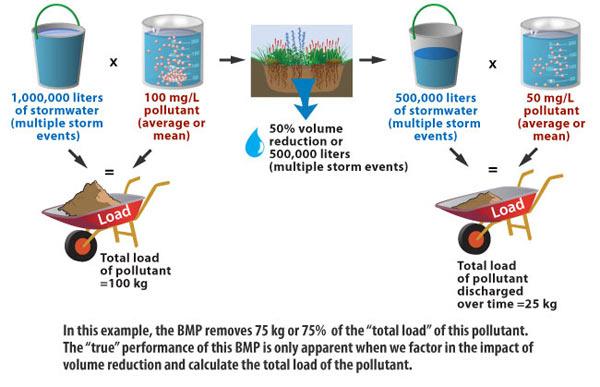 Note: Total load reduction can be estimated in several ways. The best way is to monitor a particular BMP for every rain event over several years, carefully monitoring the volume of water coming into and leaving the BMP and the concentrations of a given pollutant in multiple samples for each rain event. However, this level of monitoring is rarely possible. More commonly, a BMP is monitored for a limited number of rain events with multiple samples taken for each event.