Scientists predict that climate change will have many effects on freshwater and marine environments. These effects, along with nutrient pollution, might cause harmful algal blooms to occur more often, in more waterbodies and to be more intense.  Algal blooms endanger human health, the environment and economies across the United States. 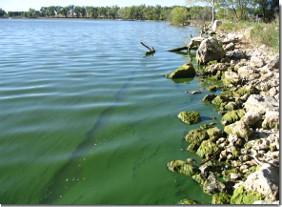 Harmful algae usually bloom during the warm summer season or when water temperatures are warmer than usual. Warmer water due to climate change might favor harmful algae in a number of ways:

Climate change might lead to more droughts, which make freshwater saltier. This can cause marine algae to invade freshwater ecosystems. In the southwestern and south central United States, toxic marine algae have been killing fish in freshwater lakes since 2000.

Algae need carbon dioxide to survive. Higher levels of carbon dioxide in the air and water can lead to rapid growth of algae, especially toxic blue-green algae that can float to the surface of the water. 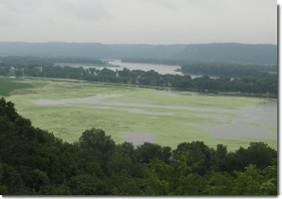 Extreme storms followed by periods of drought can lead to more algal blooms like this one seen in Iowa in 2011.

Scientists predict that sea level could rise up to one meter by the year 2100. This would create more shallow and stable coastal water, conditions that are perfect for the growth of algae.

Coastal upwelling is the process by which winds push surface water offshore and deep water moves towards the coast, bringing nutrients from the ocean floor to the surface. Climate change is expected to alter the timing and intensity of coastal upwelling. Along the west coast of the United States, excess nutrients delivered by upwelling might lead to more algal blooms.