Where This Occurs: Coasts and Bays 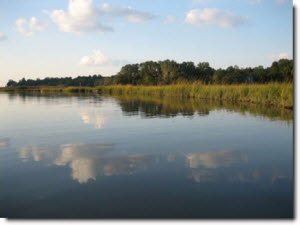 Nutrient pollution significantly impacts our nation's coastlines. About two-thirds of the nation's coastal areas and more than one-third of the nation's estuaries showed impairment from nutrient pollution, according to a 2009 EPA report. Nitrogen and phosphorus pollution in rivers, lakes and streams flows downstream and ultimately enters bays and coastal waters. These coastal ecosystems are often a key part of the local economy and nutrient pollution has a negative impact on commercial fishing, recreation, property values, tourism and related businesses. Bays and estuaries are more vulnerable to the effects of nutrient pollution because they are often shallow, narrow or confined, which limits the opportunity for water to circulate oxygen to the plants and animals.

The Long Island Sound estuary annually suffers from low dissolved oxygen conditions because of nutrient pollution – from sewage treatment plants, septic systems, atmospheric deposition, fertilizer and animal waste – from New York City, Long Island and Connecticut. In 1985, EPA, Connecticut, and New York formed the Long Island Sound Study Exit, a bi-state partnership consisting of federal and state agencies, universities, industries and community groups. In 1998, the Long Island Sound Study set a goal to reduce nitrogen loads from human sources by 58.5 percent from 1990 levels by 2014. Connecticut and New York have targeted sewage treatment plants, with upgrades that have decreased the amount of nitrogen discharged to the Sound. Local watershed organizations and municipalities are working to reduce nonpoint sources of nitrogen by educating homeowners about how to reduce their input.

Between 1998 and 2008, the areas of low oxygen in Long Island Sound decreased most years, but the duration of low oxygen conditions has increased some years. In 2009, the Long Island Sound Study estimated that New York and Connecticut were approximately 55 percent of the way toward their 2014 goal of reducing nitrogen from 1990 levels, a marked accomplishment given that population and urbanization have increased in the surrounding areas. Although Connecticut and New York are working to further reduce nitrogen inputs and improve oxygen levels, work remains. The states plan to continue implementing innovative strategies to meet their reduction goal.