Tonawanda Coke Corporation (TCC) has operated a coke manufacturing facility at this location since 1978, and the property has been used for the coke manufacturing since 1917.  Coke is made by heating coal at high temperatures in the absence of air.  On October 14, 2018, TCC suspended operations and initiated process shutdown to permanently close its facility. 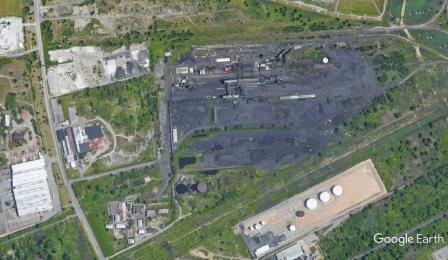 EPA in concert with the New York State Department of Environmental Conservation (NYSDEC) led the effort to oversee the safe shutdown of operations involving the 60 coke ovens at the facility.  Activities included fully emptying and purging the gases which marked the end of coke production at the facility.  EPA assisted NYSDEC in its oversight of facility shutdown activities through air monitoring.  The NYSDEC turned the lead over to EPA to conduct a full assessment of the facility and to take actions required to address any risks posed by the facility.

EPA’s work at the facility has focused on emergency cleanup activities including the excavation and removal of contaminated soil the treatment and disposal of over a million gallons of waste ammonia liquor, maintaining contaminated secondary containment areas and stabilizing drums, vessels and other containers of hazardous substances.  The removal of coal and coke from the facility also continues.  EPA has continued to maintain a presence at the Site after the sale of the property.

EPA and the U.S. Department of Justice have worked closely with New York State, local officials and the community in recent years to address violations of environmental requirements at the Tonawanda TCC facility.  EPA and the state have worked especially closely with the impacted community in their collective work.  The federal government and state have taken multiple actions, including securing a federal Judicial Consent Decree in 2015 (PDF) Exit that detailed the steps necessary for the facility to comply with federal and state environmental law.  In addition, the federal government brought criminal charges against the corporation and an individual.

During the shutdown operations at the facility, EPA conducted air sampling and monitoring and surveillance in the community around the plant until all flammable gases were purged from the process systems.  Six fixed monitoring locations were selected based on wind direction and/or other factors deemed to be relevant to the health and safety of the public.  The purpose of this project was to monitor for benzene, a volatile organic compound (VOC), sulfur dioxide (SO2), and particulates.  EPA also collected air samples for quick turnaround laboratory analysis.  The monitoring and sampling activities began on October 14, 2018 and were completed on October 21, 2018.  Air monitoring and laboratory analysis, as stated in the EPA ERT Air Sampling Report (PDF), indicated that air contaminant levels established to protect the public were not exceeded.

In mid-February 2020 the NYSDEC approved RITC’s application to the New York State Brownfield Cleanup Program (BCP) for the cleanup and redevelopment of the main plant.  In addition, a new consent order between Honeywell and EPA was executed to address those remaining portions of the TCC Site that had not been admitted into the BCP, referred to as Site 108 which is directly across River Road to the west of the main plant.  In the coming months EPA intends to continue to provide oversight of the ongoing  work being performed by Honeywell which is expected to be completed by the summer of 2020.  Apart from providing oversight of this work at Site 108, EPA has discontinued all other activities at the Site, but remains available to consult with the NYSDEC.