In 2014, EPA re-issued a general permit under the Marine Protection, Research and Sanctuaries Act (MPRSA) authorizing the National Science Foundation (NSF) to dispose of man-made ice piers in ocean waters from its base at McMurdo Sound in Antarctica. The general permit was published in the Federal Register notice of April 22, 2014 [79 FR 22488].

What is an ice pier and how is it disposed in the ocean?

The NSF is responsible for oversight of the United States Antarctic Program (USAP). McMurdo Station, the logistics hub of the USAP, receives personnel and supplies destined for locations in Antarctica via ships docked at the McMurdo Station man-made ice pier.

Man-made ice piers are constructed with steel cable, mesh, pipe, bollards and
wooden poles embedded in a man-made she 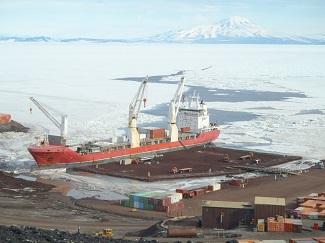 et of ice. The McMurdo Station ice pier is typically approximately 325 feet long, 150 feet wide, 15 feet thick, and is covered by gravel to provide a non-slip working surface. An ice pier has a normal life span of three to five years.

At the end of an ice pier’s effective life, the wooden poles, bollards and steel pipes are severed just above the surface of the ice, the gravel is removed to the extent possible, and all transportable equipment, materials and debris are removed. The pier is cast loose and towed as close to the Ross Sea currents as possible. The pier then floats freely within the Ross Sea ice pack, where the pier eventually disintegrates as the ice melts. The materials disposed in the ocean under this general permit (other than ice, which melts naturally) include the construction materials that cannot be removed prior to disposal.

What are the effects of the disposal of ice piers on the ocean?

EPA, after consultation with the National Oceanic and Atmospheric Administration and the Department of the Interior, determined that the disposal of man-made ice piers poses a very minimal adverse risk to the marine environment and represents small quantities of unrecoverable non-ice materials.

To further protect Antarctic environment, the MPRSA permit conditions require NSF: to implement a spill prevention, control and countermeasure plan; to report annually any spill or discharge as well as any clean-up procedures; and to track released ice piers for one year to allow NSF and EPA to confirm the fate of materials used in the ice pier construction.