The U.S. Environmental Protection Agency and the U.S. Department of Justice announced on January 18, 2017, a proposed consent decree with S.H. Bell Company requiring the company to monitor and take measures to reduce manganese emissions from its 92-acre plant that spans the Pennsylvania-Ohio border in Ohioville, Pa. and East Liverpool, Ohio.

Since 1999, U.S. Environmental Protection Agency, Ohio EPA and the federal Agency for Toxic Substances and Disease Registry (ATSDR) have monitored and analyzed the airborne levels of metals, including manganese (Mn) in East Liverpool, Ohio, at three monitoring stations. EPA has established this website as a means of providing the community with recent monitoring results and information concerning the airborne manganese levels.

Manganese is a naturally occurring element found in many soils, rocks and foods. While the element is an essential nutrient for living organisms, including humans, it is also necessary for the production of steel and is commonly found in industrial settings. Manganese can become toxic in humans at elevated exposure levels, leading to neurological and neuropsychological damage.

EPA is working with Ohio EPA and PADEP to reduce ambient manganese concentrations.

Some of these reports were made publicly available shortly after their publication.

EPA conducted soil sampling in publicly owned areas of the East Liverpool and Glasgow communities the week of Oct. 17, 2016 due to concerns about elevated airborne manganese levels detected by air monitors in the area.  These soil samples were analyzed for manganese and other metals.  EPA reviewed the findings, compared the manganese levels to EPA’s Removal Management Level (RML) and ATSDR’s Comparison Value (CV) for manganese, and found that the reported manganese levels in the soil do not pose a health concern to the residents in the communities.  This is also the case for iron and chromium levels.  The evaluation considered several factors, including, but not limited to, the accessibility of the location, the frequency and duration of exposure, soil vegetative cover, and the population potentially exposed.

RMLs help identify areas, contaminants, and conditions where a removal action (for contamination posing an immediate threat to human health and the environment) may be appropriate. Sites where contaminant concentrations fall below RMLs, are not necessarily “clean,” and further action or study may be warranted under the Federal Superfund program. In addition, sites with contaminant concentrations above the RMLs may not necessarily warrant a removal action depending upon such factors as background concentrations, the use of site-specific exposure scenarios or other program considerations.

Information on RMLs and Removal Actions

Similarly, a CV is a dose or a calculated concentration of a substance in air, water, food, or soil that is unlikely to cause harmful (adverse) health effects in exposed people. ATSDR derives CVs from scientific studies which it modifies by safety factors to be more protective of human health, thus establishing the CV for a contaminant well below levels that are known or anticipated to result in adverse health effects.

The risk-based values derived by EPA and ATSDR for concentrations of manganese in residential soil are more protective of human health, and assume more frequent exposure to the contaminant than expected to occur at the sampled locations.   Thus, an exceedance of these values at one or more locations does not necessarily indicate that EPA action is necessary to reduce exposure.

Humans require the mineral manganese in very small amounts to function normally. Most of our intake of manganese is from what we eat and drink. However, exposure to excess manganese can occur through inhalation of particulate matter containing manganese. Most of what we know about manganese as a neurotoxin, a substance that can damage the nervous system, comes from high levels of inhalation exposure in occupational and animal studies. Prolonged inhalation of airborne manganese can provoke a variety of serious toxic responses in humans, including impaired movement and effects on memory, judgment and reasoning. EPA conducted a recent study of the health impacts of manganese exposure in the East Liverpool community. 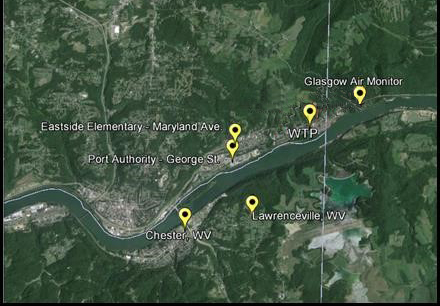 Beginning in 1999, ambient air monitors have measured manganese levels in East Liverpool by collecting 24-hour samples every sixth day at two monitoring stations on Maryland Ave. and at George St., and every third day at the monitoring station located at the Water Treatment Plant (WTP). The ambient air monitor in Glasgow, Penn. collected 24 hour samples every 6th day from Oct. 26, 2014 - July 25, 2015. Ambient air monitors in Chester and Lawrenceville, W. Va. collected 24 hour samples at least once a month. Ohio EPA, PADEP and West Virginia Department of Environmental Protection maintain their monitors, collect the samples, arrange for analysis and compile the results, which are then shared with U.S. EPA.

In 1993, EPA’s Integrated Risk Information System (IRIS) evaluated available human and animal toxicity studies on manganese and derived a reference concentration (RfC) for chronic manganese inhalation exposure of 0.05 µg/m3.  The 2015 IRIS Program Multi-Year Agenda listed manganese as having the highest priority for reassessment.  This reassessment will determine if there is new information that could lead to a revised RfC.

Significance of a Minimal Risk Level or Inhalation Reference Concentration

*The range represents individual readings taken every 3 days over the specified time period. 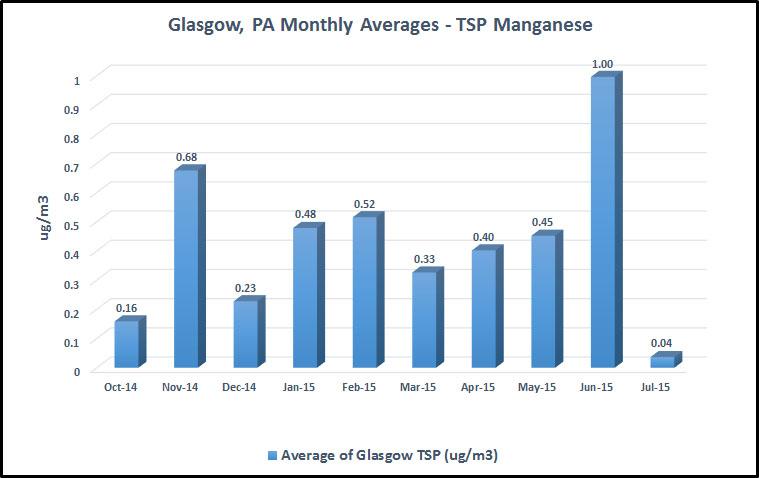 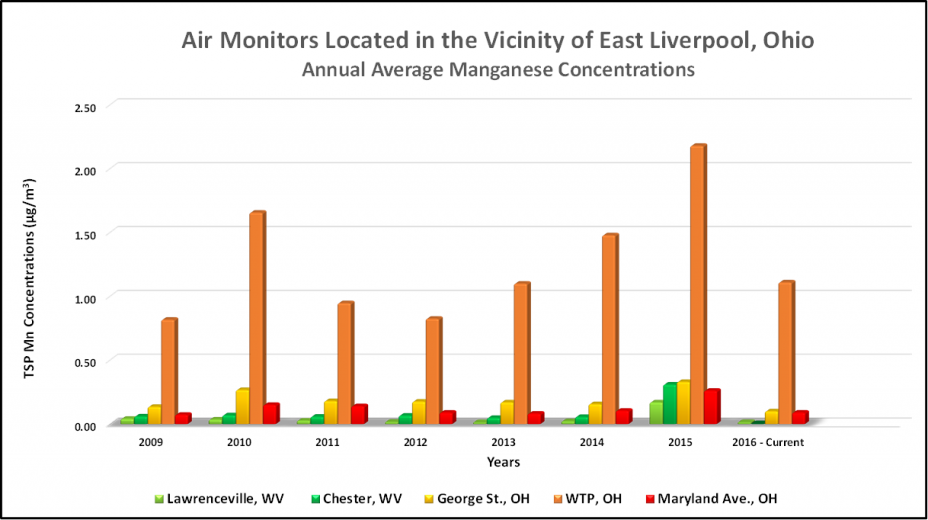 Glasgow’s air monitoring data was unable to be included in the chart above because an annual average could not be calculated using the 9 months of data collected.

*The range represents individual readings taken every 6 days over the specified time period. 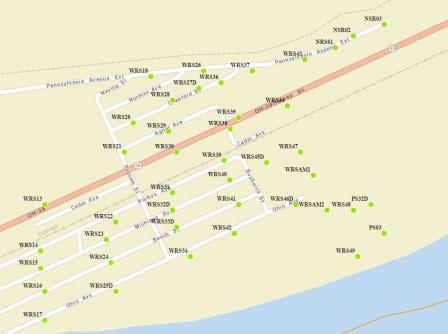 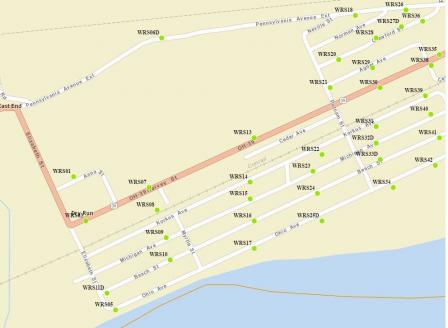 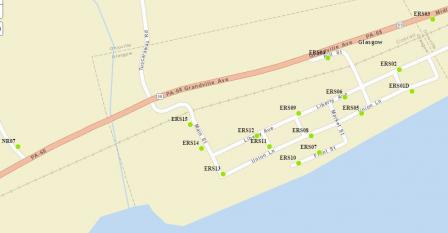