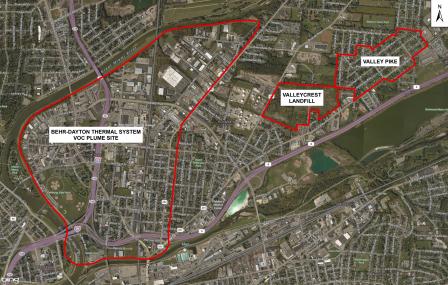 EPA is committed to monitor and enforce air quality standards, conduct site assessments, oversee remediation projects, and establish and implement appropriate cleanup plans. Although these sites differ technically, the locations of these sites are all within the Dayton area and affect the same nearby communities.  EPA wants to make sure members of the affected communities know and understand when and how they can participate in decision-making during the cleanup activities at these sites and that their concerns and information needs are considered and taken into account throughout the cleanup and post-cleanup processes. We are committed to promote effective and meaningful communication between the community and the Agency.

Behr Dayton Thermal VOC Plume The Behr Dayton Thermal System VOC Plume site is located in Dayton. MAHLE Behr Dayton Thermal Products LLC makes vehicle air conditioning and engine-cooling systems at the site. Chrysler Corporation owned and operated the facility from about 1937 to April 2002. Groundwater beneath the plant is contaminated with volatile organic compounds, or VOCs, including the solvent trichloroethene, or TCE. Polluted groundwater from beneath the plant has migrated underground to the south/southwest through residential, commercial and industrial areas. Site investigations and cleanup planning are ongoing.

North Sanitary (Valleycrest) Landfill The 102-acre North Sanitary Landfill (NSL) site is located in Dayton. More than half of the area was used for landfilling industrial and municipal wastes into unlined former gravel pits. Five disposal areas have been identified. The site sits atop and within a federally designated, sole-source aquifer. Landfill operations contaminated soil and groundwater with hazardous chemicals. Many fires have also occurred on site. Residents with affected drinking water wells have been connected to the public water supply. Following immediate actions to protect human health and the environment, planning and negotiation efforts for the site’s long-term remedy are ongoing.

Valley Pike VOCs The Valley Pike VOCs site, located in Riverside, is a mixed industrial and residential site where groundwater -- contaminated with tetrachloroethylene, or PCE, and trichloroethylene, or TCE -- was discovered in 2013. The contaminants are a group of chemicals known as volatile organic compounds (VOCs). The residential neighborhood at the site has been impacted by vapor intrusion from the contaminated ground water plume. The neighborhood is located approximately 900 feet southwest of the Mullins Rubber Products, Inc. (MRP) facility and includes approximately 500 residences.