The international treaty called The Montreal Protocol on Substances that Deplete the Ozone Layer (Montreal Protocol) Exit is gradually eliminating the production and consumption of ozone depleting substances to limit their damage to the earth’s ozone layer. The Montreal Protocol is signed by 197 countries – the first treaty in the history of the United Nations to achieve universal ratification – and is considered by many the most successful environmental global action.

The United States signed the Montreal Protocol in 1987, and has been a leader in guiding the successes of the treaty. Over the past 30 years, EPA has been a proud contributor to the broad coalition that developed and implemented flexible, innovative, and effective approaches to protect the stratospheric ozone layer. In 1995, the United Nations named September 16 the International Day for the Protection of the Ozone Layer, also known as World Ozone Day. Exit

Information on key activities and institutions to support the Montreal Protocol are listed below:

Multilateral Fund for the Implementation of the Montreal Protocol Exit

The Multilateral Fund (Fund) was established in 1991 to assist developing countries meet their Montreal Protocol commitments. To date, the Fund has approved activities including industrial conversion, technical assistance, training, and capacity building worth over US$3.0 billion. The main objective of the Fund is to assist developing country parties whose annual ODS consumption falls below a specified threshold to comply with the control measures of the Protocol.

The UNEP Ozone Secretariat hosts a Data Access Center that reports on ODS data submitted by each country, including the United States.

The United States is a founding partner of the Climate and Clean Air Coalition (CCAC), a global effort focused on reducing short-lived climate pollutants across sectors. CCAC partners are currently supporting the development of HFC inventories and studies, information exchange on policy and technical issues, demonstration projects to validate and promote climate-friendly alternatives and technologies, and capacity-building activities to disseminate information on emerging technologies and practices to transition away from high-GWP HFCs and minimize HFC leakages.

September 16th is World Ozone Day, marking the anniversary of the signing of the Montreal Protocol on Substances that Deplete the Ozone Layer, the landmark international agreement focused on helping heal the ozone layer and protecting our planet from harmful ultraviolet (UV) radiation. Learn more about World Ozone DayExitand the history of the Montreal Protocol and its implementation in the United States in this report. 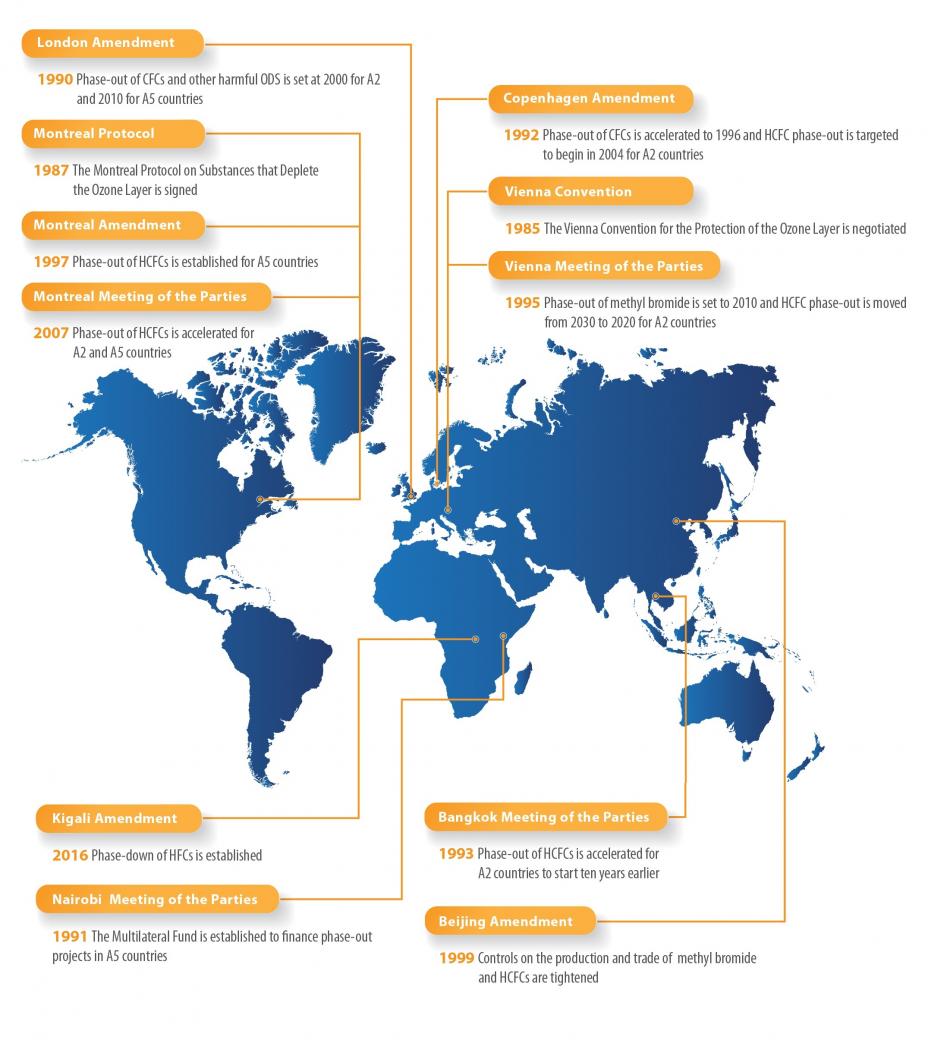