An innovative cleanup project has eliminated a decades-long, 3,000-gallon-a-minute acid mine discharge to the Little Conemaugh River in Pennsylvania’s Cambria County.

Stark before-and-after photos (below, right) show the immediate benefits of an operation to halt pollution that had poured untreated from the abandoned St. Michael mine shaft since the early 1960s – enough to fill a pro football stadium more than 100 times. Waters that had flowed orange were soon near-clear.

The EPA Mid-Atlantic Region’s Office of NPDES Permits and Enforcement worked with the Pennsylvania Department of Environmental Protection (DEP) on a 2012 permit allowing Rosebud Mining Co. to pump and treat water from the mine pool as part of the company’s proposal to gain access to underlying coal reserves. The permit – the first of its kind in Pennsylvania – requires the company to document that its treatment activities are improving water quality.

Under a related Consent Order and Agreement between DEP and Rosebud, the company built a $15 million wastewater treatment plant next to the St. Michael shaft in 2013 to treat the polluted mine water. Rosebud also agreed to make annual payments to a special trust fund to permanently pay operation, maintenance and other costs for the plant once mining is done.

The actions support a Total Maximum Daily Load (TMDL) for the Kiskiminetas-Conemaugh watershed.

The DEP had estimated that the St. Michael discharge was responsible for 3,700 tons of acid mine drainage (AMD) each year - nearly a third of the AMD pollution impacting the Little Conemaugh River, which runs into the Conemaugh, Kiskiminetas and Lower Allegheny rivers as the water moves downstream to Pittsburgh.

District Mining Manager Joel Koricich of DEP’s California District Mining Office said the project will yield “phenomenal” reductions in pollution – 1.7 million tons of iron alone. Iron loads are expected to drop by 98 percent, aluminum by 100 percent and manganese by more than half. “There was a win for everybody,” he said. “It was really quite exciting to see a 3,000-gallon-a-minute discharge dry up almost instantaneously after almost 50 years of flowing and polluting the streams. Hopefully, this builds momentum to where other major discharges in the area are taken care of similarly. We took care of the biggest one first.”

Indeed, DEP, in cooperation with the federal Office of Surface Mining Reclamation and Enforcement, is discussing plans to build a mine water treatment plant to process three other significant sources of AMD to the Little Conemaugh, leading to potential restoration of cold and warm water fisheries along sections of the river. 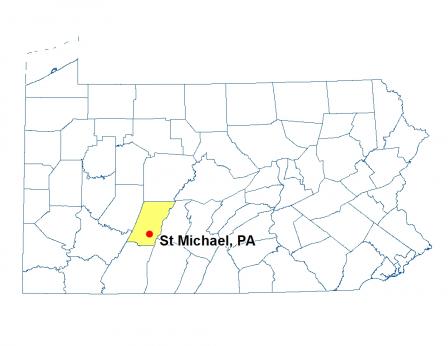 The Little Conemaugh River before and after the cleanup project. Photo Credit: Rosebud Mining Company.