One of the keys to the continued transformation of abandoned mine lands into a world-class botanic garden near Pittsburgh is an innovative rainwater system financed by EPA’s Clean Water State Revolving Fund.

EPA provided $1.36 million through Pennsylvania’s PENNVEST to build three irrigation ponds and a giant 400,000-gallon underground cistern to meet the future watering needs of flower gardens that will beckon visitors from a ridge of the Pittsburgh Botanic Garden.

According to the botanic garden’s website, the rainwater system will provide more than two million gallons of rainwater a year, avoiding the “significant expense of bringing in municipal water.”

The botanic garden, located 10 miles west of the city in Settlers Cabin County Park, opened on a permanent basis in April 2015 with a 60-acre section that includes an award-winning Lotus Pond, three miles of wooded trails, a family fun zone, and a restored 1870s barn that hosts weddings and other special events.

With 460 acres leased from Allegheny County, the facility’s next steps are construction of additional parking and a visitor’s center followed by the installation of display gardens, said Bob Hedin, an environmental consultant involved with the project.

Hedin explained that surface water from land being reclaimed from past mining activity will flow into the three ponds for storage and be pumped as necessary to the underground cistern, which will irrigate the water-intensive gardens area. The cistern and the ponds are already in place.

The irrigation system is part of the broader project to realize the vision of garden enthusiasts and community leaders to create a botanic garden from land and streams impacted by legacy mining activity and other past practices.

In May, the botanic garden received its latest infusion of funds – a $370,000 Growing Greener Grant from the Pennsylvania Department of Environmental Protection to passively clean acid mine drainage within the headwaters of the Garden’s Kentucky Hollow area. The botanic garden was also recently selected for Department of Interior Office of Surface Mining’s Abandoned Mine Lands Economic Revitalization Pilot Program.

The Pittsburgh Botanic Garden has already won a Pennsylvania Governor’s Award for Environmental Excellence for a passive treatment system to control acid mine drainage at the Lotus Pond exhibit. The pond receives mine water that has pH of 3 but is passively treated with limestone to neutral pH. The excellent water quality has allowed the botanic garden to plant the Lotus Pond with diverse aquatic plants and stock it with fish. The treatment system has been incorporated in the Garden’s trail system. 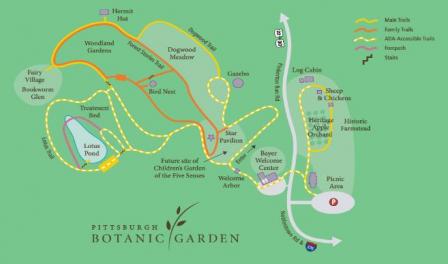 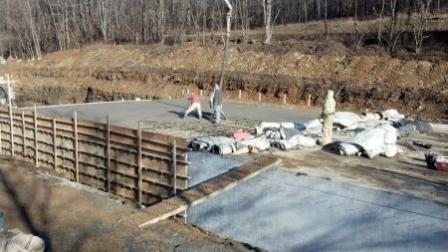 Construction of an EPA-funded cistern to satisfy irrigation needs.