Turning the Tide in the Delaware: Recognizing Incremental Progress

Decades of concerted action have led to key improvements in the health of the Delaware River and Estuary.

In the “pass or fail” approach to assessing whether a waterbody meets protective standards, major progress is often overlooked. A prime example is the effort involved in restoring the Delaware River and Estuary.

In the 1970s, water quality in the Delaware River was so bad that spring and summer dissolved oxygen (DO) levels in the Philadelphia-Camden stretch of the river bottomed out to “zero” during many weeks. The lack of oxygen was a roadblock to migratory fish like the American Shad who could not navigate the river to spawn.

Now, according to DRBC, there is less of a summertime drop in DO levels and the current standard is met much of the time. Shad now make it to their natal waters to spawn without being blocked by a low-oxygen zone, delighting many, especially organizers of the annual Shad Fest in Lambertville, New Jersey.

However, achievement of the current DO standard is only a milestone of progress and not the final goal; protection of aquatic life may require additional protective criteria. Everyone involved Exit in creating this turnaround appreciates what’s been achieved so far. The Delaware River waterfront now attracts many visitors every year – a huge benefit to local businesses. In fact, the University of Delaware estimated Exit the economic benefit of a healthy Delaware River to be over $10 billion a year.

There are other signs of progress, too. Polychlorinated biphenyl (PCB) discharges dropped 71 percent from the Top 10 largest point sources between 2005 and 2013, and a fish consumption advisory in Delaware was eased in late 2013.

The Delaware River is improving, but the job is far from done. In some ways, it may be getting harder as agencies confront new types of contaminants and minute levels of acceptable risk. Recognizing progress as it happens, without the constraints of a pass-fail approach, is a win for everyone: watershed groups gain support for their efforts and public and private groups realize early returns on their investments as water quality improves. 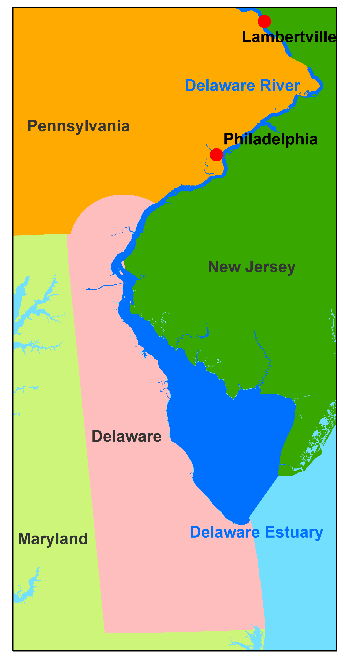 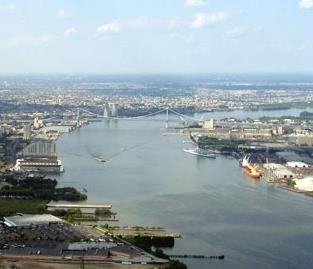 The Delaware River with Philadelphia, PA and Camden, NJ on either side.