The fortified Susquehanna Flats, the largest bed of underwater grasses in the Chesapeake Bay and a popular fishing spot, seems able to withstand a major weather punch. Its resilience is contributing to an overall increase in the Bay’s submerged aquatic vegetation (SAV), a key indicator of ecosystem health.

In the Susquehanna Flats, spanning some 10 square miles near the mouth of the Susquehanna River, research indicates that the grasses continue to recover from Hurricane Irene and Tropical Storm Lee in 2011 and are proving resilient to stresses. The ability to survive those twin blows Exit has been linked to a “subtle trend’ in reduced nitrogen pollution, a series of dry years of limited flow, and a process known as a “positive feedback loop,” where the bed’s ability to clear the water and absorb light perpetuates its own growth.

“Once the bed got established because of reductions in nutrient loadings and those dry years, it was able to help itself grow even more,” said Cassie Gurbisz of the University of Maryland Center for Environmental Science’s Horn Point Laboratory. “It’s kind of cool.”

Unlike in 1972 when the Susquehanna Flats, already stressed by nutrient pollution from a fast-developing watershed, was practically wiped out by Tropical Storm Agnes and didn’t recover for nearly three decades, the Flats maintained a sizeable portion of its bed after the major floods of 2011.

Gurbisz, the lead author of a study exploring the comeback of underwater grasses in the Flats Exit, said the ability to withstand floods “probably has a lot to do with how well the bed is doing leading up to the flood, and that has a lot to do with water quality trends.” Scientists attributed the boost in 2014 bay grasses to the rapid expansion of widgeongrass in the moderately salty waters of the mid-Bay, even in areas where vegetation had not been observed before. They also found a modest recovery of eelgrass in very salty waters and the continuing return of aquatic vegetation to freshwater areas, like the Flats, impacted by the 2011 storms. 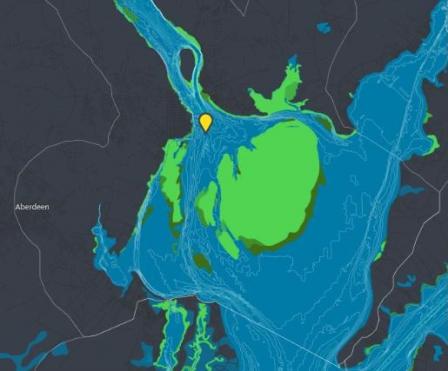 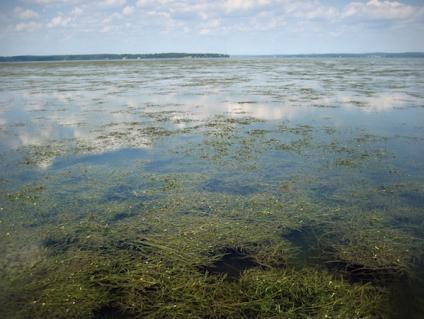 Susquehanna Flats in the Chesapeake Bay with underwater grasses returning.