TIM models and other TIM information.

One of the strengths of TIM is that it presents a method for calculating a more complete exposure profile by considering multiple routes of exposure, including a method for calculating dietary exposure doses over time for specific exposure scenarios. Earlier versions of TIM focused on adults only; however, to integrate TIM into MCnest there also is a need to calculate exposure doses to juveniles prior to fledging. There are several complex issues to address in developing a general approach for calculating juvenile dietary exposure. The greatest issue may be the very rapid increase in body weight from hatching to fledging and the related rapid change in the daily food ingestion rate. Adults also have seasonal changes in body weight and food consumption rates, especially related to the increased energetic requirements for reproduction and migration, but these changes are relatively minor compared to the significant changes in juvenile body weight and food ingestion rates occurring over a relatively short period of time. Another significant issue is the paucity of time-specific information on body weight and food ingestion rate for most avian species prior to fledging.

Our goal is to use the available information on the relationship between juvenile body weights and energetic requirements to develop a general approach for calculating juvenile dietary exposure doses appropriate for a range of avian species. Because this relationship changes daily, the Guidance Document on Risk Assessment for Birds and Mammals developed by the European Food Safety Authority (EFSA 2009) proposed using the peak food ingestion rate per body weight (FIR/BW) ratio from a study on savannah sparrows to represent the peak daily exposure in altricial insectivores. Because of the paucity of data for calculating how the juvenile FIR/BW ratio changes over time, we also propose a method for calculating the juvenile exposure dose for each species based on the highest FIR/BW ratio prior to fledging. This ratio can then be used to represent the estimated juvenile dose throughout the nestling period.

Weathers (1992) cites work by Aschoff and Pohl (1970), which found that juvenile peak DME and adult basal metabolic rate (BMR) scale the same, with peak DME averaging 1.5 times adult BMR. Adult BMR represents the minimal energetic costs for animals in a thermoneutral environment, at rest, and in a post-absorptive state.

The following table compares allometric relationships for three generic body weights. The juvenile peak DME ranges from 1.6 to 2.1 times the BMR. Figure F1 shows the juvenile DME trends between adult BMR and FMR across the full range of body weights. 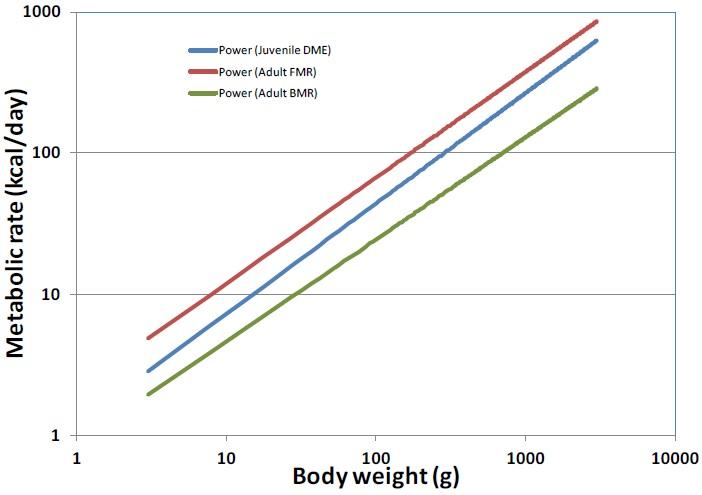 DME varies with nestling age, and the pattern for the majority of species is for DME to increase to its peak about midway through the nestling period, though for some species the peak comes closer to the period of fledging (Drent and Daan, 1980). Also, for most species once peak DME is reached, it plateaus or declines prior to fledging.

To generalize the process for generic species and a wide range of real species, we could assume that the body weight at fledging, as used in the allometric equation by Weathers (1992), is equal to the body weight of adults. There are species that fledge at weights a little higher than adults due to stores of fat to be used in the early days after fledging. There are also some species that fledge before achieving adult size and weight. For example, mourning doves fledge at approximately two thirds the size of adults. However, in general, fledglings are similar in weight to adults.

Converting peak DME (kcal/d) into the food ingestion rate (FIR, g/d wet wt) would use the same values for Gross Energy and Assimilation Efficiency that are currently used in TIM, though the proportion of each food category in juvenile diets may vary from that of breeding season adult females. Since the estimates for Gross Energy, Assimilation Efficiency, and dietary composition are constant throughout the nestling period, estimates of FIR also would peak half way through the nestling period and remain constant until fledging.

The calculation of the juvenile highest FIR/BW ratio then would use the FIR based on the proportions of food categories appropriate for juveniles and the adult body weight divided by 2. Consequently, the highest FIR/BW ratio would occur when the juvenile is approximately half of adult size and then decreases. This calculation would be a close approximation for the highest FIR/BW in species that reach peak FIR midway through the nestling period and would slightly overestimate FIR/BW for those where FIR peaks later.