Some of the content on this webpage is from the report prepared by the Missoula Metropolitan Planning Organization (MPO) for the EPA funded Diesel Emission Reduction Act (DERA) grant (DE – 97897201). Note: In general, EPA cannot attest to the accuracy of non-EPA information provided by third-parties. EPA is providing content on this page from a third-party for informational purposes only to showcase promising environmental practices. In doing so, EPA does not endorse any third-party non-government websites, companies, applications, practices, or technologies.

The city of Missoula, Montana is located along the Clark Fork River in western Montana and is the second largest metropolitan area in the state. Missoula has average low temperatures below 40 degrees Fahrenheit for eight months out of the year. Missoula County is designated as a carbon monoxide (CO) maintenance area and a PM10 (particulate matter with an aerodynamic diameter less than or equal to a nominal 10 micrometers) moderate nonattainment area based on EPA’s National Ambient Air Quality Standards (NAAQS). 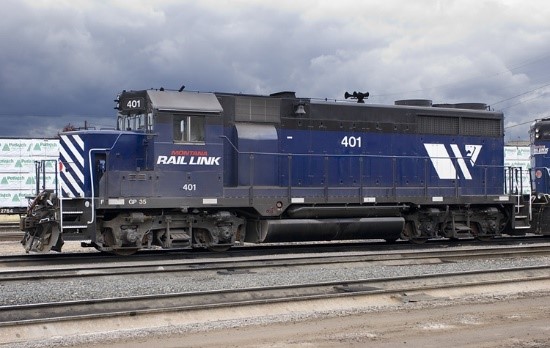 The Missoula Metropolitan Planning Organization (MPO) and MRL estimated that an average of 30 line-haul locomotives can be idling in the yard at any given time and could produce additional diesel emissions as the locomotives pass through, undergo maintenance, or refuel. The MPO and MRL estimated an annual consumption of approximately 4,800,000 gallons of diesel fuel due to prolonged idling of switcher and line-haul locomotives in the Missoula and other MRL-owned railyards.

MRL considered and implemented several options to reduce emissions from their locomotives including electric plug-ins, automatic engine stop/start (AESS), and APUs prior to the beginning of this project. Ultimately MRL determined the following would be the most cost-effective means going forward to achieve shorter idling periods, lower emissions, and improved health and welfare outcomes. 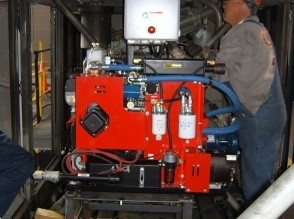 HOTSTART DDHSJR-110 APU install on a MRL locomotive. 3 Photo Credit: HOTSTART Inc.Locomotive APUs are small diesel engines that can be used to prevent prolonged main engine idling when the locomotive is not moving by providing warmth for the main engine and power for crew needs. The APU provides sufficient heat to prevent damage to the main locomotive engine during freezing weather. By reducing the number of hours that the large locomotive engine idles, APU installations can reduce the overall emissions profile of railyards.

The APU installation portion of this project was partially funded by a 2009 Diesel Emissions Reduction Act (DERA) grant awarded to the MPO that exercises jurisdictional authority over local air quality issues. The grant helped fund 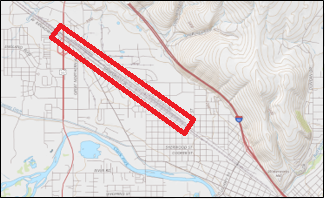 Downtown Missoula, MT. The MRL railyard is positioned between the Clark Fork River and U.S. Interstate 90. Map Credit: ESRI, USGS.installation of APUs in eight resident switcher locomotives at a mid-sized railyard, located adjacent to downtown Missoula, Montana operated by MRL, a Class II regional railroad. The engines in the eight switcher locomotives that were part of this project are over 50 years old, so they emit diesel emissions that are significantly higher than newer locomotive engines.

There were 2,618 prolonged idling hours each year per locomotive engine (2,200 hours overnight “must idle” periods and 418 hours reported as occurring during normal switcher duty) before installation of the APUs and implementation of the new idling policy at MRL. The installed APUs and new temperature-dependent idling policy achieved the following idling outcomes.

The net idling emission reductions due to the yard idling policy change and APU installation that were done in 2010 are noted below:

Costs of the APU units and installation as well as cost savings due to reduced fuel usage are outlined below.

MRL has found the APU installations and changes to the Missoula yard idling policy to be a good program that continues to benefit those across Montana, including Montana Rail Link employees and others who work and live near the railyard. Attention to diligent maintenance and repair of APUs, as well as the training of new locomotive operators in proper APU monitoring and operation were also essential to the success of this idle reduction initiative.