Some of the content for this page is supplied by the project partners: New York City Economic Development Corporation, New York City Department of Small Business Services,CSX Transportation, Inc., Waste Management of New York, LLC, New York & Atlantic Railway, and the New York Department of Sanitation. Note: In general, EPA cannot attest to the accuracy of non-EPA information provided by third-parties. EPA is providing content on this page from a third-party for informational purposes only to showcase promising environmental practices. In doing so, EPA does not endorse any third-party non-government websites, companies, applications, practices, or technologies.

Bronx, Queens and Kings Counties are three of the most densely populated counties in the U.S. and have asthma rates that are higher than the national average. Communities in these counties receive a disproportionate quantity of air pollution due to their proximity to regional and nearby sources including:

CURES advocated for the procurement of low-emission diesel freight locomotives in Queens and Brooklyn in order to address the local impacts from the locomotive operations. They engaged with elected officials and agencies including DSNY to recommend a locomotive repower (engine replacement) for the Fresh Pond Yard freight operations after exploring available technologies. Repowering to a low-emission configuration is an effective means to reduce nitrogen oxide (NOx), which benefits the New York-Northern New Jersey-Long Island Moderate Ozone Nonattainment Area and also reduces particulate matter of 2.5 microns or smaller (PM2.5).

In 2011, as part of its efforts to implement a sustainable waste export system for the City, DSNY signed a Letter of Commitment with WMNY to fund the procurement of a repowered locomotive for Fresh Pond Yard and partnered with NYCEDC and NYC Small Business Services on an EPA grant application for the project. Mayor Michael Bloomberg, the New York City Council, the Congressman and Congresswoman from the 10th and 6th Congressional Districts of New York, and state elected officials from Queens also supported this project.

The projects resulted in successful collaboration between multiple agencies (NYC Small Business Services and DSNY), civic organizations (CURES), businesses (WMNY, CSXT and NY&A ), and colleges and universities. Participation in public planning meetings with the New York Metropolitan Transportation Council (the Metropolitan Planning Organization for the area) resulted in the addition of an environmental goal in the Regional Transportation Plan to pursue funding to replace older diesel locomotives with newer Tier 4 or cleaner locomotives. Most importantly, the success of this project resulted in improved local and regional air quality through emission reductions described below. 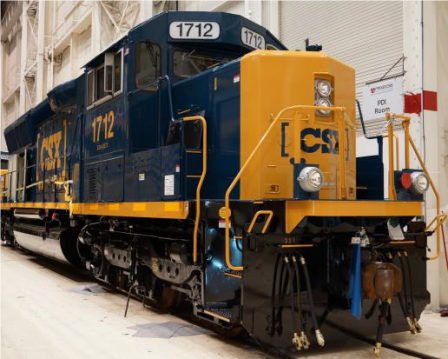 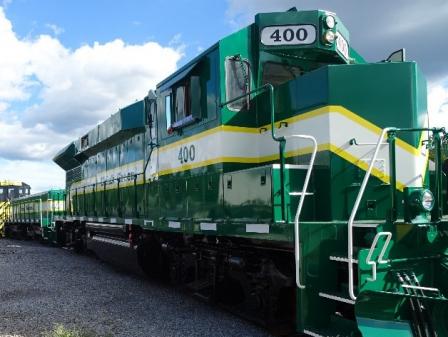 WMNY's Tier-4 Mother-Slug Locomotive
Photo Credit: Waste Managment of New YorkThe mother-slug is a combination of two locomotive units operating in tandem, both of which are equipped with traction motors (which furnish the tractive power to the rail, physically moving the train along the tracks).

Only one of the locomotive bodies is equipped with a diesel engine and main generator which together provide the electric power for traction motors in both units.  This configuration allows the 2300-hp mother-slug locomotive to move more train cars than just the locomotive alone – achieving more work with the very-low emission engine. EPA provided $1 million in DERA funding and the project partners provided a cost share of $2,897,560.

The NY&A Tier 4 locomotive is being used on the Bushwick and lower Montauk branches in Brooklyn and Queens, including serving DSNY’s Varick and Review Avenue truck-to-rail waste transfer station operated by WMNY. The locomotive provides service between Fresh Pond and the two branch lines as it travels through neighborhoods, including Bushwick and East Williamsburg in Brooklyn’s community district 1 and Glendale, Middle Village, Ridgewood, Maspeth, Blissville and Long Island City in Queens’ community districts 2 and 5. The repowered locomotive was placed into service in 2018. Based on historical operating characteristics of the locomotive, WMNY expects annual emission reductions of approximately:

At the onset of the CSXT project, the project partners anticipated that a 3,000-hp conventional diesel short-haul locomotive would be repowered with one or more new engines certified at Tier 3 emission standards. However, the Single-Engine Low Emission Locomotive technology was selected by the project partners due to the load demand required to service the Oak Point Yard and deliver the weekly interchange train to the NY&A  Fresh Pond Yard in Glendale, Queens.

The WMNY project anticipated repowering a 1,200-hp diesel switch locomotive with one or more new nonroad engines configured to meet the Tier 4 emission standards. The project was delayed for a significant amount of time as the marketplace evolved to offer an appropriate locomotive. The plan was to repower the locomotive as a multi-engine generator set locomotive using multiple nonroad certified engines at the time the application was submitted. However, there were no manufacturers that met the service demands. Additionally, a Tier 4-certified single engine switcher locomotive repower was not commercially available until 2017.

Under the terms of the collaboration, CSXT, NY&A, and WMNY will make the locomotives available for use within the NYC area for a minimum of five years, except as required to leave the area for maintenance or service. The partners are hopeful that the successful outcomes of this project and the experience gained in the implementation of Tier 4 locomotive technology will encourage other operators to pursue switcher upgrades.