Some of the content is from a report prepared by the Virginia Port Authority for the EPA funded Diesel Emission Reduction Act (DERA) grant (83561901). Note: In general, EPA cannot attest to the accuracy of non-EPA information provided by third-parties. EPA is providing content on this page from a third-party for informational purposes only to showcase promising environmental practices. In doing so, EPA does not endorse any third-party non-government websites, companies, applications, practices, or technologies.

The DERA Grant Program provides incentive funding for projects focused on reducing diesel emissions from old heavy-duty diesel engines that do not meet the newest highway and nonroad engine emission standards.  Since 2008, a total of 140 clean diesel grants have been awarded to port specific projects, totaling $138 million. An additional $56 million was awarded through the DERA to multi-sector projects that involve ports. 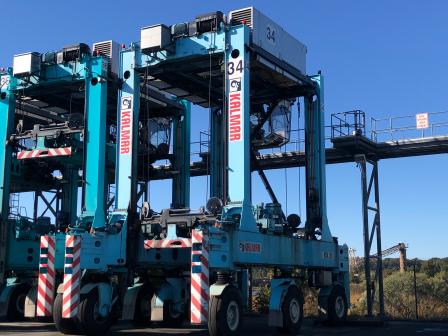 Hybrid Diesel-Electric Shuttle CarrierThe new shuttle carriers were deployed through the VPA’s Green Operator (GO) Exitprogram, which is a program designed to help motor carriers replace aging trucks with newer models. The shuttle carrier replacement was completed quickly and efficiently because of existing procedures in the GO program that already met the DERA program’s vehicle scrap-and-replacement requirements. The GO program also helped the VPA promote the project to the community and regional stakeholders.

Several stakeholders partnered with VPA and VIT to promote the project and to share information about benefits and considerations for hybrid cargo handling technology. Promotion was through social and conventional media, websites, and presentations at local, regional and national events. Stakeholders asked to help with promotion included the American Association of Port Authorities, the Coalition for Responsible Transportation, Virginia Clean Cities Coalition, the Institute for Energy and Environmental Research at James Madison University, the Virginia Maritime Association, Virginia Department of Environmental Quality, and the Environmental Defense Fund.

Introduction of the hybrid shuttle carriers combined with other efficiency improvements throughout the port have resulted in fewer cargo moves and shorter routes between moves. The changes have reduced operating hours for the new shuttle carriers when compared with the older equipment.

The VPA learned that some of the hybrid machine parts were not compatible with those of the typical diesel machine, and this kept the machine out of operation when maintenance was needed while waiting for parts. As a result, the VPA implemented a process to keep specific hybrid components in stock as part of the regular inventory.

Through the GO Program and other project partners, information regarding successful projects like this can be shared with communities and other port industry stakeholders. This outreach helped demonstrate value not only in air quality improvements and cost savings, but in strengthening relationships with neighboring communities.

The VPA’s goal in this project was to replace aging equipment with newer, cleaner vehicles, while demonstrating to stakeholders and the community that hybrid technology is a viable alternative to diesel-only fleets. This project was the first deployment of this technology on the U.S. East Coast. VPA received additional DERA funding in 2017 to replace another nine diesel shuttle carriers with hybrid powered shuttle carriers (planned for deployment in the fall of 2018).