About EPA's Work in Puget Sound

What is the Salish Sea?

The name "Salish Sea" was officially adopted in 2010 to describe the inland marine waters of Washington and British Columbia from the north end of the Strait of Georgia, to the south end of Puget Sound, and west to the mouth of the Strait of Juan de Fuca.

Puget Sound is part of a larger marine ecosystem called the Salish Sea, which also includes the Georgia Basin in Canada and the Strait of Juan de Fuca.

There is no boundary that officially defines Puget Sound, but for regulatory purposes we refer to it as the marine areas south of the U.S.-Canada border and east of the Strait of Juan de Fuca.

Humans have inhabited the Salish Sea for over 10,000 years. Over 7 million people currently live within its 42,000 square-mile watershed. By the year 2025, we expect the population to reach more than 9 million people. 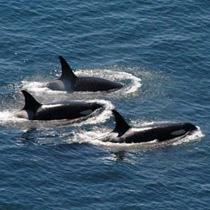 In the late 1800's, the orca population was estimated at over 200. Today their numbers are less than half that. Photo courtesy of Stuart Yee.It's also home to over 200 species of fish, over 100 species of birds, 20 species of marine mammals, and over 3,000 species of invertebrates.

The health and productivity of Puget Sound is a cornerstone of this region's quality of life, and the area's vibrant economy benefits from commercial fishing to eco-tourism.

Many of these species have experienced serious declines and are at risk or vulnerable to extinction. The continued loss of these species points to declining ecosystem health that affects the economic, social and cultural well being of our communities.

We all have a common interest in protecting and restoring Puget Sound. Federal, state, and tribal governments, community groups, non-profits, and municipalities are delivering protection and restoration work that's showing results.