Cobalt (chemical symbol Co) is a hard, gray-blue metal that is solid under normal conditions. Cobalt is similar to iron and nickel in its properties and can be magnetized like iron. The most common radioactive isotope

isotopeA form of an element that has the same number of protons but a different number of neutrons in the nucleus, giving it a different atomic mass. For example, uranium has thirty-seven different isotopes, including uranium-235 and uranium-238. of cobalt is cobalt-60 (Co-60). Cobalt-60 is a byproduct of nuclear reactor operations. It is formed when metal structures, such as steel rods, are exposed to neutron radiation.

Cobalt in the Environment 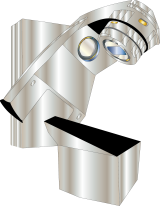 Cobalt-60 is used as a radiation source in many common industrial applications, such as in leveling devices and thickness gauges. It is also used for radiation therapy in hospitals. Accidental exposures may occur as the result of loss or improper disposal of medical and industrial radiation sources. Though relatively rare, exposure has also occurred by accidental mishandling of a source at a metal recycling facility or steel mill.

Most exposure to Co-60 takes place intentionally during medical tests and treatments. Such exposures are carefully controlled to avoid adverse health impacts and to maximize the benefits of medical care.

Mishandling of a large industrial source of Co-60 could result in an external exposure large enough to cause skin burns, acute radiation sickness

radiation sicknessA serious illness that can happen when a person is exposed to very high levels of radiation, usually over a short period of time. or death.