Bauxite refineries produce alumina (aluminum oxide), which is used to create aluminum metal. Bauxite is also used to manufacture other industrial products, such as abrasives, cement and chemicals. There are two operating bauxite refineries in the United States, both of which are located in Louisiana. The most frequently-occurring radionuclides and their decay products

decay productsThe atoms formed and the energy and particles emitted as radioactive material decays to reach a stable form. found in bauxite and bauxite processing residuals include:

The Bayer Process, which is used by about 80 active plants worldwide, is the primary method of producing aluminum from bauxite. Bauxite ore is dissolved in sodium hydroxide, or lye, at a high temperature and pressure. Then, the alumina and bauxite ores are separated by washing out the waste (red muds or sands) from the alumina. Finally, hydrated alumina is crystallized and calcinated (dried in a furnace) to produce solid alumina.

Naturally-occurring radioactivity in bauxite ores is concentrated during the refining process, creating TENORM in bauxite refining residuals. The most frequently-occurring radionuclides found in red muds or sands include uranium, thorium, radium and their decay products. There are an estimated three billion tons of bauxite residue at both active and legacy processing sites. 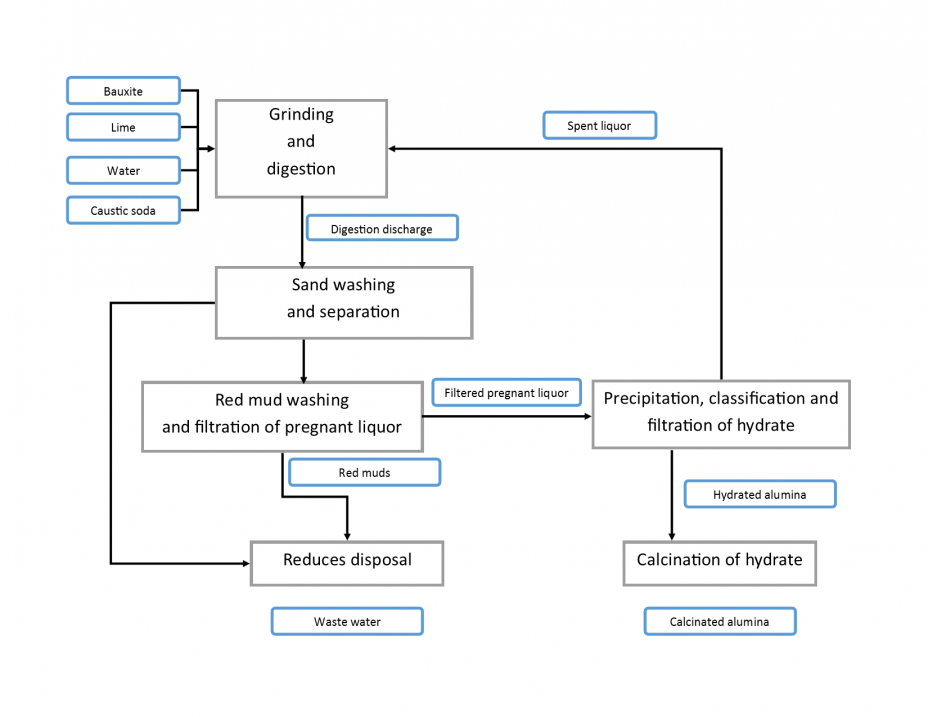 The red mud waste dries to a very fine, powdery solid and contains significant amounts of iron, aluminum, calcium and sodium. The types and concentrations of minerals present in the muds depend on the composition of the ore and processing conditions. In some plants, red muds are further processed to produce aluminum oxides.

Red muds are caustic, and the United States does not currently approve any secondary use of the waste. The radioactivity content is only one of several concerns that pose a risk to the environment, as red muds also have a high salinity and pH. In some red mud samples, the EPA has identified elevated arsenic and chromium concentrations; in some cases, arsenic levels were as high as 16,000 parts per billion (ppb), and chromium, 374,000 ppb. In the United States, wastes are usually disposed in large impoundments that are lined with clay or synthetic liners.

The European Union, however, has an index of Naturally-Occurring Radioactive Material (NORM) content that is allowable in various building materials; some countries in the EU have used red muds in building materials. Internationally, only about 2-3% of bauxite residuals are reused in a productive way.

The Ajka red mud spill in western Hungary in October 2010 was the largest documented release of alumina industry byproducts into the environment; about 3.5 million cubic feet of red mud suspension breached a failed retaining wall, and may still have lasting effects today.