decay productsThe atoms formed and the energy and particles emitted as radioactive material decays to reach a stable form.) found in coal combustion residuals are:

In a typical coal-fired boiler, coal is burned and the heat is extracted to generate steam. The steam is used to drive a turbine, which in turn, drives an electrical generator. Low pressure steam leaving the turbine is fed to a cooling system which extracts any residual heat and condenses the steam back to water. Condensed water is collected and recycled back to the boiler where the process is repeated.

Coal is used as a fuel in boilers to generate heat to create steam for power generation and industrial applications. Radioactive materials that are naturally included in coal’s composition are also combusted during this process. When combustion is completed, the naturally occurring radioactive materials mostly end up in fly ash, bottom ash and boiler slag

slagByproduct left after a desired metal is thermally separated from its raw ore. . About 10 to 20 percent of fly ash, bottom ash and boiler slag consists of TENORM. Learn more about coal ash.

Soils and rocks contain different amounts of naturally occurring radioactive material (NORM). Coal also contains NORM in differing quantities, based on the environmental conditions (e.g., hydrogeological makeup). When coal is burned, the products that result, called coal combustion residuals (CCRs) also have differing levels of TENORM. The resulting CCRs are directly related to the amount of radioactive material that was in the coal before it was burned. CCRs can contain concentrations of TENORM that are 3-5 times higher than background levels in average soil in the United States.

The image below shows the radioactivity concentrations of three different coal deposits in the United States.1 These radioactivity profiles tie coal to its place of origin. 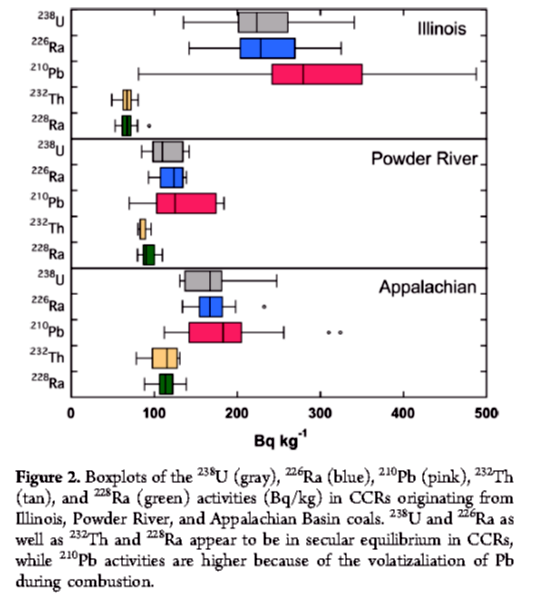 Reducing air pollution from fly ash and other constituents from coal combustion are a requirement of the Clean Air Act. Pollution control equipment is routinely used to reduce the emission of fly ash into the atmosphere. These systems work by removing particles out of plant exhaust through electrostatic precipitation, fabric filters and condensation. The filters are about 99 percent effective; about one percent of fly ash is released into the air.

CCR reuse depends on the type of ash: