Before phosphate ore is turned into fertilizer or other products, it is transformed into either phosphoric acid (through a wet process), or elemental phosphorus (through a thermal process). This processing concentrates NORM in the waste products, transforming them into Technologically Enhanced Naturally Occurring Radioactive Materials (TENORM).

The United States mines and consumes about 23 million tons of phosphate rock per year, most of it (95%) for wet-process phosphoric acid or super phosphoric acid with the balance used to produce phosphorus compounds for industrial applications, primarily glyphosate herbicide.

The yearly consumption of phosphate-based fertilizers in the U.S. averaged close to 5.8 million metric tons (MT) between 1960 and 2007, and had increased to over 8.5 million MT by 2007. While phosphate fertilizers are not considered to be waste, they do contain some of the naturally occurring radium (Ra-226) found in phosphate ores.

Fertilizer application rates vary depending upon the type of crops and soils. A typical phosphate fertilizer application rate is about 40 kg per hectare (approximately 15 lbs. per acre). Fertilizers are available in over 100 different blends with varying concentrations of nitrogen, phosphorus and potassium.  Further data on fertilizer consumption in the U.S. (but without data on radionuclide content) can be found on the Department of Agriculture's website.

Phosphate rock (phosphorite) mining is the fifth largest mining industry in the United States in terms of quantity of material mined. In 2019 the total production of phosphate rock in the U.S. was estimated at 23 million metric tons (MT). Most phosphate production leads to the making of fertilizers.

The phosphate industry is concentrated in the southeastern U.S. About 90 percent of domestic production capacity in Florida, North Carolina, and Tennessee. Florida alone accounts for approximately 80 percent of the current capacity, making it the world’s largest phosphate producing area. The western U.S. also has a phosphate industry, particularly in Idaho.

The wastes of most concern are the byproducts created during the wet and thermal processing steps of fertilizer production.

Side view of phosphogypsum stack

Phosphate production generates huge amounts of phosphogypsum wastes, nearly 48 million MTs in 1988 alone. Industry estimates that 5.2 tons of phosphobypsum is produced for every ton of phosphoric acid. Phosphogypsum has little market value and is transferred as a slurry to waste piles called phosphogypsum stacks. The solid portion of the slurry consolidates while the water pools on the stack's surface. Eventually gypsum is dredged from the pools to build up the edges around the stack forming a reservoir for storing process water. After a stack is completely full, it is graded, covered and seeded for erosion protection.

Phosphogypsum contains appreciable quantities of uranium and its decay products, such as radium-226, due to their presence in phosphate ores. Uranium in phosphate ores found in the U.S. ranges in concentration from 0.26 - 3.7 Bq/g (7 - 100 pCi/g). 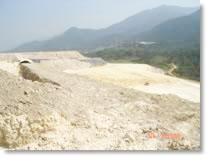 Stacks are constructed with little or no soil preparation.

Stacks are generally constructed on unused land or on mined out areas at production sites with little or no prior preparation of the land. They are not covered with soil or any other material.

There are over 70 identified stacks in the U.S. with the highest percentage found in Florida. The stacks are of considerable size ranging from 2 - 324 hectares (800 acres) in surface area and 3 - 60 meters in height.

Since there are large quantities of phosphogypsum waste, the industry encourages research into potential uses in order to minimize the disposal problem. The greatest use of phosphogypsum is in agricultural applications. Researchers proposing new uses must file an application with EPA.

Phosphogypsum has been used in agriculture as a source of calcium and sulfur for soils that are deficient in these elements. When the phosphogypsum is used as a fertilizer, it is simply spread on the top of the soil. When used for pH adjustment or sediment control, it is tilled into the soil.

The activity of phosphogypsum used for agricultural purposes may not exceed 0.37 Bq/g (10 pCi/g). An estimated 221,000 MT of phosphogypsum are taken from the phosphogypsum stacks and used in agriculture each year. There is no limitation on the amount of material that can be applied and farmers do not have to maintain certificates or application records.

In the past, phosphogypsum was incorporated into a Portland cement mixture for use in road construction. The use of phosphogypsum for such purposes is banned under the EPA final rule issued on June 3, 1992, which amends 40 CFR 61 Subpart R.

Radiation levels in phosphogypsum vary considerably from stack to stack and from different locations in a single stack due to a number of factors:

Phosphate slag is the principal waste produced from the thermal process for the conversion of phosphate rock to elemental phosphorus. Production of elemental phosphorus, primarily in Idaho, has steadily gone down due to decreasing demand and increasing energy costs associated with its production.

Phosphate slag is a glassy substance created during furnace processing. Because of its physical properties and its high carbonate content, slag is less susceptible to radionuclide leaching than phosphogypsum. However, concentrations of uranium, thorium and radium in phosphate slag have been measured as high as 1.85 Bq/g (50 pCi/g) in some instances.

Slag is generally stored in waste piles on site at production facilities. It has been reused for a variety of applications:

Because of concerns over elevated radionuclide concentrations in phosphogypsum, the U.S. Environmental Protection Agency issued a final rule on June 3, 1992 amending 40 CFR 61 Subpart R. It states that phosphogypsum intended for agricultural use must have a certified average concentration of radium-226 no greater than 0.37 Bq/g (10 pCi/g). There is no limitation on the amount of material that can be applied, and farmers do not have to maintain certificates or application records.

EPA also has a National Emissions Standard for Hazardous Air Pollutants (NESHAP) for Po-210 emissions from the thermal process at 40 CFR 61 Subpart K.

Due to concerns over radiation exposure, the State of Idaho has prohibited the use of phosphate slag in the construction of habitable structures since 1977.