"Do you know about radon?"

Dr. Bill Field at the University of Iowa and the Iowa Cancer Consortium have prepared "Breathing Easier" to help educate physicians on the dangers of radon and the link between the radioactive gas and lung cancer. Watch the videos! Exit

Charles Lynch, M.D., medical director of the Iowa Cancer Registry, hosts the video and asks other physicians the simple question: "Do you know about radon?" Dr. Lynch stresses physicians' vital role in delivering information on radon to their patients.

This publication was supported in part by grant number XA-83576001 from the U.S. Environmental Protection Agency.

The following sources provide a wide range of good information about lung cancer, prevention, and treatment.

Radon Risk If You Smoke

from "A Citizen's Guide to Radon: The Guide to Protecting Yourself and Your Family From Radon"

Radon Risk If You Have Never Smoked

(2005) Two studies show definitive evidence of an association between residential radon exposure and lung cancer. Two studies, a North American study and a European study, both combined data from several previous residential studies. These two studies go a step beyond earlier findings. They confirm the radon health risks predicted by occupational studies of underground miners who breathed radon for a period of years.

Early in the debate about radon-related risks, some researchers questioned whether occupational studies could be used to calculate risks from exposure to radon in the home environment. “These findings effectively end any doubts about the risks to Americans of having radon in their homes,” said Tom Kelly, Former Director of EPA’s Indoor Environments Division. “We know that radon is a carcinogen. This research confirms that breathing low levels of radon can lead to lung cancer.”

The National Research Council published the report, entitled: "Health Effects of Exposure to Radon: BEIR VI, Committee on Health Risks of Exposure to Radon (BEIR VI)". This report by the National Academy of Sciences (NAS) is the most definitive accumulation of scientific data on indoor radon. The report confirms that radon is the second leading cause of lung cancer in the U.S. and that it is a serious public health problem. The study fully supports EPA estimates that radon causes about 15,000 lung cancer deaths per year.

Report: EPA's Assessment of Risks from Radon in Homes

In 2003 the Agency updated the estimates of lung cancer risks from indoor radon based on the National Academy of Sciences' (NAS) latest report on radon, the Biological Effects of Ionizing Radiation (BEIR) VI Report (1999). EPA worked closely with the Science Advisory Board (SAB), an independent panel of scientific experts, to determine how best to apply the risk models developed by the BEIR VI committee. The SAB's advice and recommendations were incorporated modifying and extending the methods and approaches used in BEIR VI to construct a single model yielding results midway between the results obtained using the two models preferred by the BEIR VI committee. The Agency's updated calculation of a best estimate of annual lung cancer deaths from radon is about 21,000 (with an uncertainty range of 8,000 to 45,000), which is consistent with the estimates of the BEIR VI Report. A single risk model also permitted the Agency to calculate a numerical estimate of the risk per unit exposure [lung cancer deaths per working level month (WLM)] which will be used to update estimated lung cancer risks from radon in various publications, including A Citizen's Guide to Radon.

(January 13, 2005) U.S. Surgeon General, Richard H. Carmona, issues a Health Advisory warning Americans about the health risk from exposure to radon in indoor air. The Chief Physician urged Americans to test their homes to find out how much radon they might be breathing.

Dr. Carmona also stressed the need to remedy the problem as soon as possible when the radon level is 4 pCi/L or more, noting that more than 20,000 Americans die of radon-related lung cancer each year.

The U.S. EPA is one of several government agencies and countries supporting this initiative and is encouraged by WHO’s attention to this important public health issue.

"Radon poses an easily reducible health risk to populations all over the world, but has not up to now received widespread attention," said Dr. Michael Repacholi, coordinator of WHO’s Radiation and Environmental Health Unit. He went on to say that "radon in our homes is the main source of exposure to ionizing radiation, and accounts for 50% of the public’s exposure to naturally-occurring sources of radiation in many countries."

The following graphic compares EPA estimates of the annual radon-related lung cancer deaths to other selected cancers. The other mortality numbers in this graphic were obtained from the National Cancer Institute's 2010 Surveillance, Epidemiology, and End Results (SEER) estimated US mortality numbers (PDF) (1 pp, 15 K, About PDF). 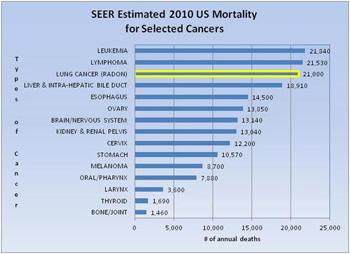 View a larger version of this image.