How to Create and Maintain an Indoor Worm Composting Bin 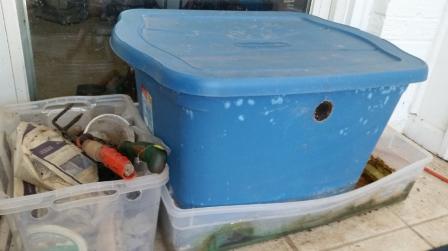 A worm composting bin, known as a vermicomposter, can be fairly inexpensive and easy to maintain. There are several ways to vermicompost. Below are instructions on how to build one kind of worm composting bin designed to be used inside. It is also possible to purchase worm composting bins. You will want to put your bin in an indoor space as you do not want the worms to freeze in the winter or get too warm in the summer. Additionally, you may want to put the bin in a basement or other out-of-the-way space since you will be producing compost and worm “tea” in the composter.

First, buy, borrow or repurpose the following items that you will need to start worm composting:

1. Two plastic bins – one must be taller and rest inside the other, shorter bin.

2. A drill – A drill with a one inch diameter and a one-eighth inch diameter drill bit is needed to drill the holes mentioned above.

3. Screening material – The type used for window screens is fine – just be sure NOT to use metal which will rust over time when exposed to the moisture in the bin. You only need about four 4 inch by 4 inch scraps of screen. Why use screening? If you don’t cover the holes, the worms may escape. 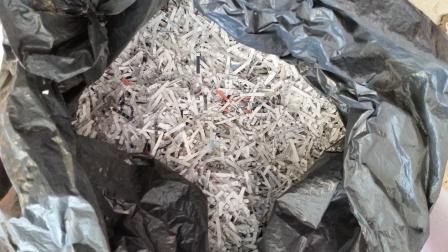 4. Waterproof glue – To keep the screens in place, even after they get wet.

5. Shredded paper – Enough to fill your bin three inches deep and extra to add each time you feed the worms once a week. Almost any kind of paper works, but avoid heavy, shiny paper and colored paper.

6. A little bit of dirt – A pound will be enough. Just make sure it does not have harmful chemicals in it. If all goes well, the worms will be producing their own dirt (compost) soon.

7. A little bit of water – Some water is needed to moisten the paper and dirt to create a comfortable medium for the worms to thrive. Soak the paper and then drain it before using. 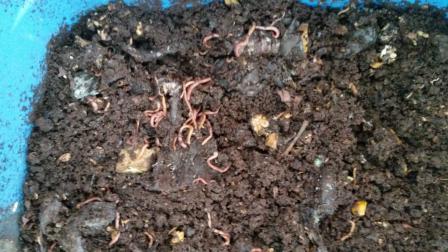 8. Worms – A pound of red wrigglers are recommended because they consume waste quickly, but earthworms also work. Red wrigglers are available online, from your U.S. Department of Agriculture (USDA) extension office or from another worm bin owner. Be careful of worms that are invasive species, such as the Asian Jumping Worm, which can be sold as the Alabama Jumper or Georgia Jumper. Worm bins produce more worms as well as great compost.

9. A trowel – Needed to move the compost as needed in the bin.

10. Food scraps container – Use a small container with a tightly fitting top to collect vegetable and fruit scraps.

Why not just put the food straight into the worm bin? Worms do best left alone, so it is best to feed them only once a week. Use the food scraps container to collect scraps for a week and then feed the worms weekly.

Below are the steps to take to prepare the bins:

Preparing the Paper, Soil, Water Medium and Adding the Worms

Combine shredded paper, soil and just enough water to dampen everything. Put the mixture into the tall bin and fill the bin about three inches deep. Add your worms to the mixture and let them get used to it for a day before feeding them. Make sure the mixture is very moist, but not forming puddles of water. 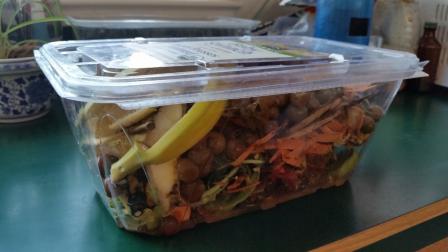 Collect food scraps, such as vegetables and fruit scraps, bread, tea bags, coffee grounds, and cereal in your food scrap container as you prepare and clean up after meals. Do not include any animal by-products (fat, bone, dairy, meat, waste). Also, it may take the worms longer to process woody or dry items like stems or the outer layer of onions. Worms will eat paper as long as it is thin or cut into small pieces, but they will not eat plastic or fabric tea bags, coffee filters or the labels placed on produce by grocery stores.

Once a week, do the following: 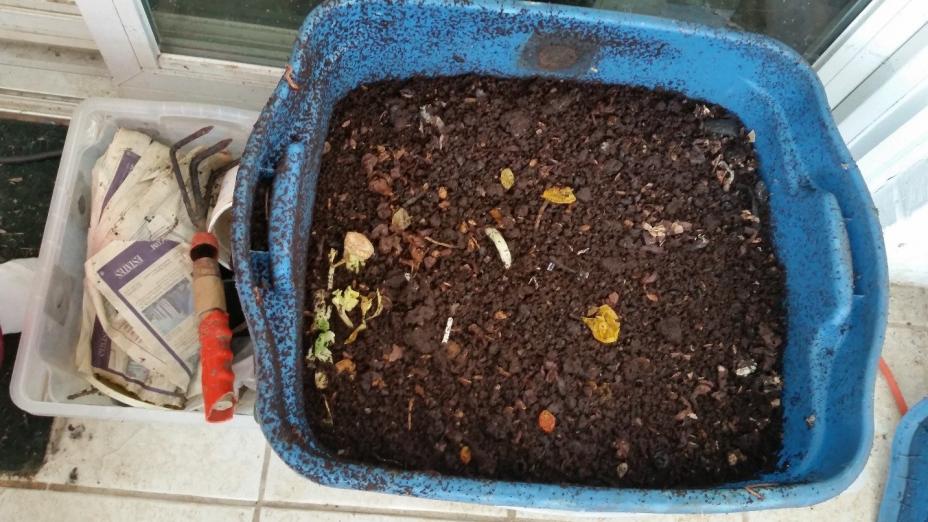 Once every few months, scoop the liquid out of the lower container and use it as fertilizer outside on soil near plants, or water it down to use on indoor plants. When the worm bin is full (i.e., when the compost reaches the bottom of the top holes you drilled), do the following: