About the Organic Analysis Group

The Organic Analysis Group analyzes samples of water, soils, and oils for pesticides, herbicides, polychlorinated biphenols (PCBs), and semi-volatile compounds. These samples come from a variety of places such as wells that provide drinking water to the public, waste treatment plants, chemical plants, landfills, or abandoned sites where hazardous waste has been disposed. The organic laboratory consists of an extraction laboratory, a pesticide/PCB laboratory, a volatile laboratory, and a semi-volatile laboratory. The Organic Analysis Group is part of the Laboratory Analysis Section, under the direction of the Section Chief.

In the organic extraction laboratory, the analytes of interest are extracted from the sample by adding a solvent such as methylene chloride, and then reducing the extract to concentrate the analytes. It is then sent to the analytical labs (gas chromatographs or mass spectrometers) to be analyzed.

This laboratory performs pesticide, pcb, and herbicide analysis on sample extracts provided by the extraction laboratory. The concentrated solvent is injected into a gas chromatograph (GC) which separates the many possible components for identification. The GC uses a detector called an electron capture detector (ECD) that is specific for the halogen groups which are common to many pesticides (specifically chlorine groups).

This somewhat selective detector helps to eliminate compounds from being identified as pesticides if they don't have a halogen group. Compounds are identified by the amount of time it takes for them to travel through the GC column and reach the detector which then makes a peak on the chart for that compound. Analytes detected are confirmed on a second GC column (and or detector) that is different than the first. Only compounds identified by both columns are reported as present. 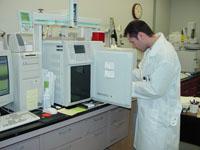 This laboratory uses Gas Chromatography/Mass spectrometry (GC/MS) to identify the semivolatile compounds sometimes referred to as Acid/Base/Neutral. The solvent extract is taken from the extraction laboratory and injected into a GC/MS instrument.The GC separates the many possible components in the solvent and the mass spectrometer detects these analytes as they leave the GC column. The GC produces a retention time for each component (same as in the Pesticide lab) and the MS gives a fingerprint identification. The semi-volatile compounds are compounds that typically are not volatile enough to be analyzed as a volatile by purge and trap, but still volatile enough to be analyzed by GC.

This laboratory also uses GC/MS to identify the target analytes of interest. The unique feature of this analysis is the use of the purge and trap (P&T) to extract the sample (the extraction laboratory is not typically involved with VOA samples). The purge and trap bubbles a gas (helium) through the liquid sample to force the volatile analytes out and into a special trapping material that is in the P&T. The trap concentrates the analytes and injects them into the GC/MS for analysis. This is necessary because VOA (volatile organic analysis) compounds are gases at room temperatures.