Lifecycle analysis, sometimes referred to as fuel cycle or well-to-wheel analysis, is used to assess the overall greenhouse gas (GHG) impacts of a fuel, including each stage of its production and use.  EPA’s lifecycle analysis includes significant indirect emissions as required by the Clean Air Act. 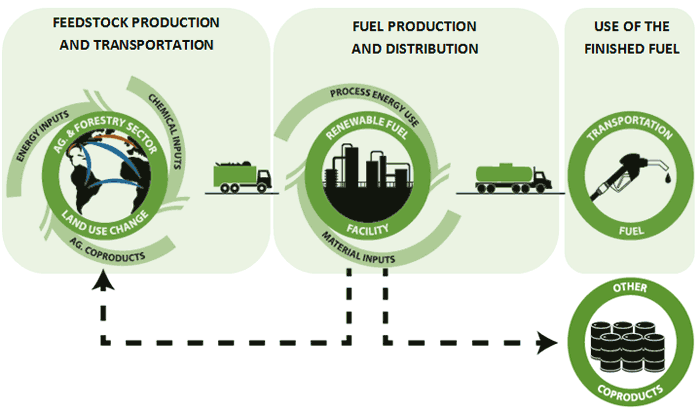 The sum of all of these lifecycle emissions for each renewable fuel pathway are then compared to the direct emissions from the baseline petroleum fuel it displaces. The results of these analyses are used to determine if the fuel pathways meet the GHG reduction thresholds required by the CAA. 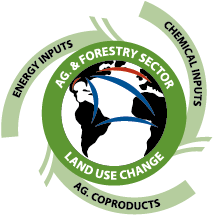 EPA's analysis of feedstock production considers the domestic and international agricultural/forestry sector-wide impacts of biofuels. These impacts are estimated by modeling the market impacts of increased biofuel production and use scenarios out to the year 2022.

The feedstock analyses are country-neutral — meaning they apply regardless of the point-of-origin or different growing practices used at individual farms. This approach captures the average impacts of using a certain amount of a feedstock for biofuel production, as opposed to an alternative use. These impacts are likely to be the same regardless of which farm grows the specific feedstock used for biofuel production.

EPA’s analysis also includes the emissions associated with transporting the feedstock to the renewable fuel facility. 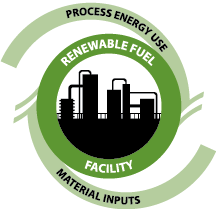 This includes energy and material inputs used for handling, processing, and storing the feedstocks, co-products, intermediate products, and resulting fuel. The GHG emissions are calculated using emissions factors for all of the process energy (e.g., natural gas, coal) and electricity used for fuel production operations. These factors include the upstream emissions associated with extraction, transport, and distribution of the energy, and are generally determined on an average basis (e.g., grid average electricity in the United States). The upstream emissions associated with significant material inputs used to produce the renewable fuel, such as methanol for biodiesel production, are also included.

The EPA's assessment of fuel production does not include activities that are clearly unrelated to the fuel lifecycle (e.g., offset projects) or emissions associated with physical and organizational infrastructure (e.g., facility construction, employees commuting to the facility).

EPA’s analysis also includes the emissions associated with distributing the finished fuel to the consumer.

Co-products that are used in the agricultural sector are included in EPA's modeling of the global agricultural and forestry sector. Other co-products are evaluated by considering the emissions impacts of their most likely uses and the products they displace in the market. In general, this co-product analysis applies globally, meaning any GHG emissions associated with co-product use are included. EPA has limited capacity to draw distinctions among different fuel producers based on slight modifications in how their co-products are used. These slight variations are not likely to have a significant impact on the emissions analysis, as the average impacts on the overall market will tend to be similar regardless.

Use of the Finished Fuel