Homeowners spend an estimated $35 billion or 14 percent of their total energy-related expenditures on space cooling alone, whereas commercial buildings spend more than $25 billion or 14 percent annually.3 The dominant fuel used for space cooling tends to be electricity. In 2010, space cooling in the residential sector produced an estimated 210 million metric tons of carbon dioxide emissions, with commercial buildings adding an additional 151 million metric tons per year.4

Requirements for cooling systems depend on the size of the spaces that need to be cooled, but these systems can generally be scaled up as long as there is enough energy available to run them. 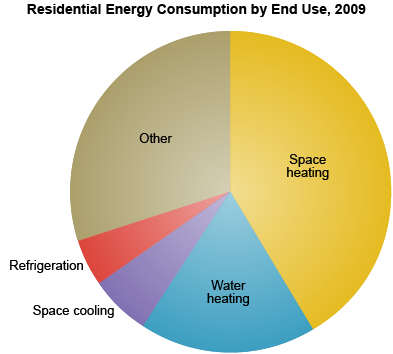 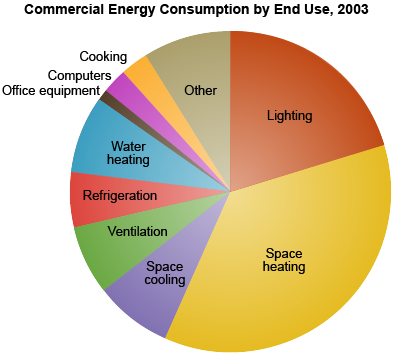 These percentages are based on “site” or “delivered” energy, which is the total Btu value of energy at the point when it enters the building.

The simplest form of renewable cooling relies on pumping water from a cold reservoir or chilling water by pumping it through underground pipes. Other renewable thermal technologies can cool spaces using a technology called absorption refrigeration—a type of air conditioning that uses a refrigerant chemical to produce cold air from hot water. In both cases, renewable sources might be able to cover the entire load, or they can provide partial coverage and save money and energy as a supplement to traditional electric or thermal energy sources.

This technology uses a ground source heat pump running in reverse to take advantage of the relatively constant temperature of the ground a few feet below the surface. Relatively warm water or refrigerant fluid can circulate through underground pipes, losing heat as the pipes come into contact with relatively colder ground. The fluid returns at a cooler temperature and can be used to chill water, which in turn can circulate through the building to create a simple and effective cooling system.

Making cold air out of hot water is actually an old technology, invented in the 1850s. This technology relies on the process of evaporation. Turning liquid water into water vapor requires energy to break the bonds that hold water molecules together in liquid form.

Refrigeration follows the same principle that allows the human body to be cooled by sweating. When you sweat, the water molecules in your sweat absorb heat from your body in order to break the bonds holding them as a liquid. The water evaporates, and heat is removed from your body as a result.

Today’s air conditioners replace water with a more efficient refrigerant fluid, then reuse this refrigerant rather than releasing it to the atmosphere. This technology, known as absorption refrigeration, features four major steps, as the following diagram shows: 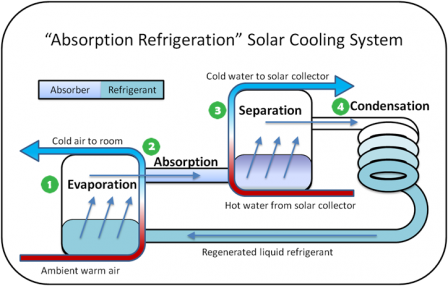 Ground source heat pumps can run in reverse to provide chilled water for small-scale space cooling applications. In a renewable absorption refrigeration system, the thermal energy (heat) used to drive the cooling process is most commonly produced from concentrating solar collectors, but it can also come from any other thermal energy source, such as a direct geothermal well or a woody biomass furnace. Refrigeration cooling requires a higher level of heat than what is required for space heating or pool heating, so unglazed solar collectors are not adequate to drive these processes alone. Evacuated tube collectors can often produce water that is hot enough to support a refrigeration cooling system, as long as there are enough collectors for the size of the cooling system.

The interactive diagram below shows which renewable technologies can serve domestic or commercial space cooling applications. You can click any of the technologies to go to a new page with more detailed information.