HexSim is a computer application within which plant and animal population models are constructed. Users define the model structure, complexity, and data needs.

Every HexSim function can be accessed through a sophisticated graphical user interface (GUI). HexSim uses spatial data to capture landscape structure, habitat quality, stressor distribution, and other types of information. HexSim’s design makes it ideal for exploring the cumulative impacts to wildlife populations and plants resulting from multiple interacting natural and anthropogenic disturbance regimes. HexSim’s GUI is written in C#, its model engine is written in C++, and its executables have been compiled for Windows.

HexSim’s current and future application to EPA’s agency priorities include the following:

HexSim is a modeling framework within which plant and animal population models are constructed. Users define the model structure, complexity, and data needs. Every HexSim function can be accessed through a sophisticated graphical user interface (GUI). HexSim uses spatial data to capture landscape structure, habitat quality, stressor distribution, and other types of information. HexSim’s design makes it ideal for exploring the cumulative impacts to wildlife populations and plants resulting from multiple interacting stressors.

The HexSim Model Structure (click image for larger version)HexSim simulations are built around a user-defined life cycle. This life cycle is the principal mechanism driving all other model processing and data needs. Users develop the life cycle when setting up a simulation (but it can be modified at any time). The life cycle consists of a sequence of life-history events that are selected from a list.

This event list includes survival, reproduction, movement, resource acquisition, species interactions, and many other actions. Through the creative use of events, the user can impose yearly, seasonal, daily, or other temporal cycles on the simulated population. Each event can work with all, or just a segment of a population, and events can be linked to static or dynamic spatial data layers. Each life-cycle event has its own data requirements. Simple scenarios may use few events with minimal parameterization and little spatial data. But when more complexity is warranted, HexSim allows a great deal of data and behavior to be added to its simulations.

HexSim scenarios (the models you build) include descriptions of one or more populations, their spatial data needs, life cycle, parameter requirements, and criteria such as the length of time a model should run. Each population is composed of individuals, and individuals have traits that can change probabilistically, or based on age, resource availability, disturbance, competition, genotype, etc. These traits allows individuals to have unique properties that vary in time and space. Traits also make it simple for you to separate populations into classes, for example, based on sex, fitness, disease status, or location. Combinations of trait values can be used to stratify most life history events, so you can easily adjust vital rates by age, stage, or resource acquisition class, or to design a movement event that only operates on a very specific collection of individuals, etc.

In addition, one trait’s values can be influenced by multiple other traits, which makes it possible to set up stressor interactions and complex feedback loops. Traits can also be used to capture species’ interactions such as parasitism, competition, mutualism, mate-finding, etc. 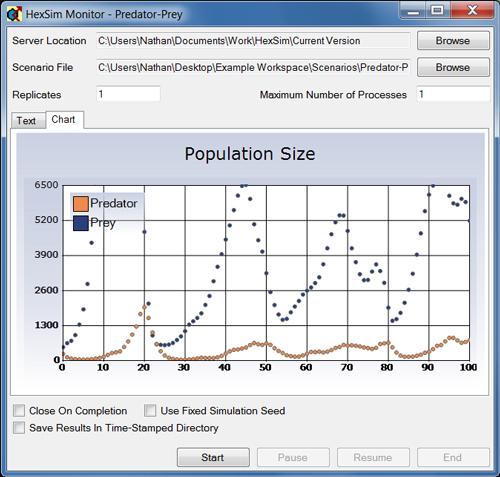 Screen shot of a chart on HexSim's Monitor view.A number of different data analysis tools are built into the HexSim model. These include reports, maps (called tallies) of model dynamics, and an animated simulation viewer. In addition, HexSim Census events track population size, stratified by arbitrary combinations of traits. And Data Probe events write out the value of variables held by individuals as a simulation progresses. HexSim reports are comma separated variable (CSV) files, and can be opened with a spreadsheet. The output maps are easily converted to raster or Grid ASCII files, or to ESRI Shapefiles. Other usability-related features include batch processing and command line tools, and more.

Examples of HexSim applications include population viability analysis for one or more wildlife species, studying the consequences for wildlife of multiple interacting disturbances, assessing which habitat components are most critical for population maintenance, quantifying the consequences of species invasions or competition, designing restoration, mitigation, or reintroduction strategies, determining the impacts that roads and other barriers may be having on viability, measuring the consequences for wildlife of changes to landscape connectivity, mapping the distribution and strength of demographic sources and sinks, exploring mechanisms linking human activities to patterns of disease spread, adding realism to the study of landscape genetics, and more.

HexSim runs on Microsoft's Windows operating system. However, the model engine is written in C++, so porting it to another platform is a possibility. The HexSim GUI is written in C#, and would have to be completely rewritten for non-Windows computers. The HexSim model engine has been compiled for both 32-bit and 64-bit computers, and the HexSim interface will automatically launch the version that is appropriate for your computer.

HexSim does not use an installer -- you simply download the program and run it. This means it is not necessary to have administrator privileges on your computer to use HexSim. And to completely remove the model from your computer, all you have to do is delete that one folder.

HexSim model development began in 2006, culminating in 2016 with version 4.0.  HexSim grew from an existing spatial IBM (individual-based model) called PATCH, constructed during the period from 2000-2006.  The HexSim model’s utility and scientific defensibility have been well-documented through its applications in more than thirty published studies examining a wide range of species, landscapes, and stressors.

HexSim was developed under an agreement between the EPA, the University of Washington, and the Department of Defense’s Strategic Environmental Research and Development Program. These three institutions share ownership of the project, including the HexSim model source code. HexSim will be of interest to students and professionals working in ecological and conservation-related disciplines including research, management, and policy formation. The HexSim model’s utility and scientific defensibility has been well-documented through its applications in more than fifty published studies examining a wide range of species, landscapes, and stressors. It has been subjected to the Agency's peer and administrative review, and it has thus been approved for distribution and use. Reference herein to any specific commercial products, process, or service by trade name, trademark, manufacturer, or otherwise, does not necessarily constitute or imply its endorsement, recommendation, or favoring by the United States Government.

The views and opinions of authors expressed herein do not necessarily state or reflect those of the United States Government and shall not be used for advertising or product endorsement purposes.

Support for HexSim will be provided on a case-by-case basis, to the extent that time is available. Contact the author, listed below if you have questions, suggestions, bug reports, or for any other comments, please use:

Inquiries about HexSim may be directed to the model’s author:

Additional information can also be found at a website maintained by the HexSim Users Group: www.hexsim.net EXIT