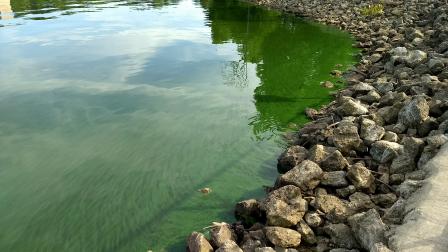 Harmful algal blooms are a major environmental problem in all 50 states. Some, but not all, types of HABs are overgrowths of toxin-producing algae in fresh or marine waters that can adversely affect human and animal health and local economies. Cyanobacteria (also known as blue-green algae) are a type of bacteria that exhibit characteristics of algae and can form these HABs. They often develop due to a combination of factors, such as excess nutrients, water temperature, and light availability.

In 2015, EPA began collaborating on the Cyanobacteria Assessment Network (CyAN) project with federal partners, including the National Aeronautics and Space Administration (NASA), the National Oceanic and Atmospheric Administration (NOAA), and the U.S. Geological Survey (USGS). The goal of the project is to provide federal, state, tribal, and local partners with the capability to detect and quantify algal blooms and related water quality using satellite data. This research collaboration led EPA scientists to develop the CyAN mobile application. The CyAN app, which was officially released to the public for download on Android devices in 2019, allows local and state water quality managers to easily assess satellite derived cyanobacteria biomass concentrations for over 2,000 of the largest lakes and reservoirs across the country. This easily accessible information can empower managers to make faster and better-informed management decisions related to cyanobacterial blooms. The team is currently developing a web-based version of the app, which will be compatible with most devices.

Another water challenge that EPA is addressing is the presence of per- and polyfluoroalkyl substances (PFAS) in drinking water resources. PFAS are a group of synthetic chemicals that have been used in a variety of industries around the globe since the 1940s. There is evidence to suggest that continued exposure to PFAS above certain levels can adversely affect human health.

To address concerns about the impact of PFAS chemicals in drinking water, EPA researchers have been conducting a variety of studies, including the development of standard analytical methods to detect the presence of PFAS in drinking water. These tested and validated methods are important resources to help government and private laboratories accurately and consistently measure PFAS in the environment so that they can make more informed decisions for their communities. In 2018, EPA released Method 537.1, which can be used to detect and quantify 18 PFAS chemicals in drinking water. The original Method 537 was published by EPA in 2009 and then revised in 2018 to include four additional PFAS, including HFPO-DA. In 2020, EPA made editorial updates to the method, and Version 2.0 of 537.1 is now available.  Researchers also helped develop the new validated Method 533, which can be used to accurately test for 11 additional PFAS. EPA and private laboratories can now use EPA methods 533 and 537.1to measure 29 PFAS chemicals in drinking water.

In addition, EPA is evaluating different drinking water treatment technologies that can remove certain PFAS from drinking water sources. This work has been added to the Drinking Water Treatability Database, an EPA resource that helps drinking water utilities, communities, states, and academics identify effective treatment processes for contaminants in drinking water. So far, EPA research has helped populate the database with 35 treatment processes and 123 regulated and unregulated contaminants. In a recent update in summer 2020, EPA added treatment and contaminant information about four new PFAS compounds. This update brings the total number of PFAS compounds in the database to 26, including PFOA and PFOS. Researchers have also added 20 new scientific references to the existing PFAS entries, which increases the depth of scientific knowledge available in the database.

For 50 years, EPA researchers have conducted research critical to protecting America’s drinking water. In the face of new challenges to drinking water resources and systems, EPA research has provided support to federal, state, tribal and local and partners through the development of methods to detect emerging contaminants and the creation of decision support tools like the CyAN app. As new challenges emerge, EPA remains committed to addressing threats to drinking water and public health.

Per- and Polyfluoroalkyl Substances (PFAS) Research