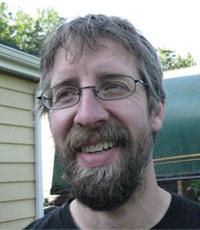 Dan Villeneuve is a research toxicologist at EPA’s Mid-Continent Ecology Division (MED) in Duluth, MN. He earned his Ph.D. from Michigan State University and did post-doctoral research at Oregon State University before joining EPA as a National Research Council postdoc in 2004. He has been a federal employee at EPA since 2006.

How did you get started in science?

I grew up in Wisconsin, so I was a fan of the outdoors, which made me want to try to preserve it. My interest in science dates back to grade school; it was always my favorite subject, so I knew early on that I wanted a career in science. Not too long after that, I decided to focus on biology. Eventually I became really interested in toxicology because it was a bit more of an applied science; you can really see the opportunity to make an impact on environmental policy.

What research do you do at EPA?

My research is focused on making effective use of alternative types of biological effects data—for instance, high-throughput toxicity data that measures and characterizes biological changes in response to chemical exposures—using what are known as Adverse Outcome Pathways (AOPs). AOPs are conceptual frameworks that describe how an organism responds, on a molecular and cellular level, when first exposed to a toxic chemical and connect that response to adverse effects that are of regulatory significance.

What excites you most about your research?

The exciting part of the research that we are doing is the potential to transform the way regulatory toxicology is done. AOPs can help utilize data that can be generated more efficiently and move toxicology, as a whole, from a more observationally and experimentally based science to a much more predictive one. AOP development and use is really about applying our fundamental understanding of biology and toxicology to draw conclusions about potential toxicological outcomes, as opposed to just going into the lab and measuring them directly.

The biology itself is fascinating. What I enjoy most about my research is trying to understand the biology on a fundamental level, so that we can predict the way different organisms will respond to different kinds of stressors. My research is diving into the details of biology and understanding how living systems work.

What would I actually be doing, or what would I like to be doing? I always joke that, after I retire, I’ll start a punk band and travel around the country playing loud music in dive bars, with some rock climbing thrown in between shows. I don’t know that I have any musical talent to back it up, but that’s what I would do.

I would certainly encourage students to pursue a career in science. Given the modern era, I would say it would be great to combine mathematics and computer science with science. I think there’s a lot of great opportunity now in the merging of computer science, mathematics, and biology. Looking back, it’s an area that I wish I had spent more time and training on. I would also say if you’re pursuing a career in science, it’s definitely doable. A lot of times people tend to think that science is something other people do, but it is achievable if you set your mind to it and don’t give up.