Blowing Smoke: What Can Firefighters’ Breath Reveal About Chemical Exposure During a Fire? 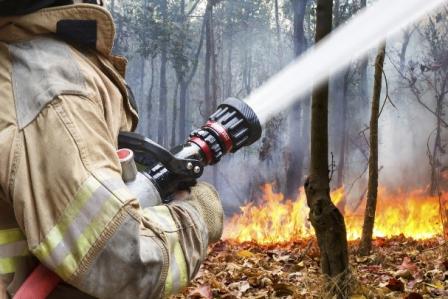 When firefighters enter a burning building, they have more than hot flames to fight. There’s also the smoke to contend with, which often contains combustion byproducts and contaminants that are harmful to human health.

During a structure fire, firefighters’ respiratory tracts are protected with a self-contained breathing apparatus, while skin is shielded by specially designed clothing. But even using this protective equipment, firefighters still have a higher cancer rate than the general population, which studies have linked in part to their increased exposure to the dangerous compounds in smoke. [1, 2]

Recent research led by the National Institute for Occupational Safety and Health (NIOSH) examined firefighters’ exposure to volatile organic compounds (VOCs) during structure fires by analyzing their exhaled breath before and after controlled burns. EPA scientists offered technical support, developing a method to analyze breath samples, studying the data, and authoring several reports on their findings — all in hopes of better understanding firefighters’ chemical exposure and protecting their health.

Dr. M. Ariel Wallace, EPA scientist and lead author on a paper sharing breath results from the study, says studying breath is an ideal way to assess exposure to VOCs, partly because it’s so accessible.

“Breath is a relatively non-invasive biological medium compared to blood or urine, and participants have been shown to be more willing to provide these samples,” Wallace said. She explained that exhaled breath monitoring is also a comparatively simple method, since it doesn’t involve the extra post-processing steps that liquid samples require.

To assess the firefighters’ exposure to VOCs, EPA scientists collaborated with NIOSH to study 12 controlled structure burns with realistic firefighting responses at the University of Illinois Fire Service Institute. The burns were conducted in a wood framed residential structure with identical home furnishings as fuel. Each burn was assigned 12 firefighters in typical fireground positions – like attack (fire suppression) or search and rescue – to fight the fire.

Researchers collected exhaled breath samples from the firefighters before and after each burn exercise, then organized the data according to their positions in the field. They also visualized the data of individual firefighters to see which individuals conformed to group trends of increased or decreased exposure. The data offered some interesting insights.

Wallace noted that this may be due to many factors, including differences in individual firefighting positions, how well the individual adhered to safety precautions, or how well their protective equipment fit and functioned during the fire. How close each firefighter was to the active fire, and other environmental exposures before and after the fire – including any off-gassing of VOCs from protective gear – may have also contributed to differences in individuals’ breath data.

This research illustrates the importance of looking not only at data trends for the group, but the individual as well, since certain people may be more or less susceptible to chemical exposure than others. “Not every person will experience the same level of exposure to a chemical of interest,” Wallace said. “The reasons for these differences in exposure level are worth investigating so we can better understand how to decrease the exposure of the population.”

Although this research focused on firefighting activity, scientists suggest the concept could also be applied in other exposure scenarios, like a forest fire, to study human health and ecological effects.

To learn more about this research, read the full article in the Journal of Occupational and Environmental Hygiene. Exit