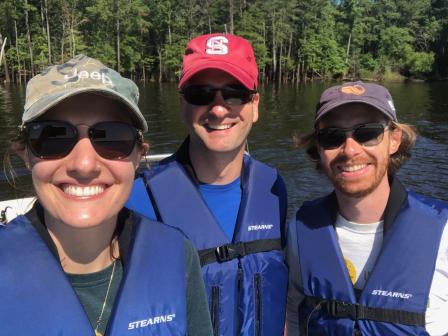 Members of the Cyan team preparing for a day of satellite validation.Published September 1, 2020

Though satellite data have been available for many years, use in decision-making has been hindered by complicated data formats and the time burden to process and access the data. The CyAN app gives water quality managers and local public health professionals the ability to easily assess satellite derived cyanobacteria biomass concentrations for over 2,000 of the largest lakes and reservoirs across the country. With this easy to use, customizable interface, officials can rapidly distill critical water quality information for their communities.

The CyAN app was released on the Google Play Store for Android devices in July 2019. Since then, the app has been helpful to communities across the nation in monitoring harmful algal blooms.

The CyAN app was already making impacts in communities before it’s public release. A recent article in GeoHealth describes a 2017 bloom in Utah Lake that local public officials monitored using satellite data. This resulted in officials responding seven days earlier than they would have using other detection methods. This extra week of notice resulted in an estimates savings of about $370,000 in healthcare costs, lost work hours and other economic impacts. The authors of the study used data provided by the Cyanobacteria Assessment Network (CyAN) while the app was still in beta testing.

More recently, New Jersey developed their 2020 Cyanobacterial Harmful Algal Bloom (HAB) Freshwater Recreational Response Strategy and incorporated data from the CyAN app into their screening process to inform continued response and confirmation actions. Officials intend to use the app to inform decisions on staff deployment for response actions such as field screening and sampling for the seven largest lakes in the state where satellite data is available.

Another community that has been able to use the CyAN app for their monitoring activities is the Grant County Health District in Washington. Kelsey Jacobs, an environmental health specialist with the county, has seen value in the CyAN app for her community, “We toyed with the idea of trying to organize a volunteer group of people as citizen scientists who, in their natural course of living in the area and recreating, would be able to let us know of problem areas. However, once CyAN was released in 2019, we found it much more helpful with monitoring. By dropping pins near all of the major public access points, we’ve been able to have a pretty good idea of where areas of cyanobacteria growth are currently occurring. That’s been important to us because not only do we face the internal limits with our budget, but the state labs as well.”

EPA led the development and deployment of CyAN in partnership with NASA, NOAA, and USGS. EPA scientists are in the process of developing a web browser interface that will allow the CyAN app to be accessed on most devices and not limited to Android operating systems.

A training video is available for those that wish to learn more about how to use the CyAN app.