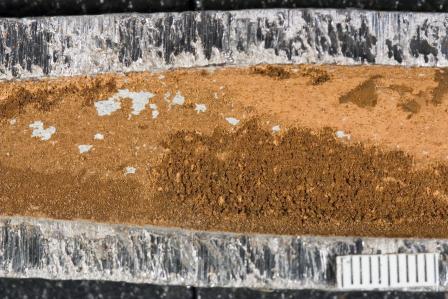 Actual pieces of pipe were taken out of water systems and sent to EPA where scientists examined layers of the pipe scales, the materials that build up on the inside of pipes. An estimated six to ten million older homes across the country have lead service lines. Service lines connect individual houses to the water main in the street; this means that water coming into a house may be transported via a lead service line even if no lead pipes are visible inside the home. Lead can be transferred from the lead pipe into the drinking water when the pipe materials corrode, when there are physical disturbances to the pipe, or when there are changes to the quality of water entering the home.

Given that there are many lead service lines in use across the country, limiting corrosion is a necessary step to reduce potential lead exposure from drinking water. Public water systems can control corrosion through a variety of methods including strict control of key water quality parameters and proper addition of a phosphate or silicate corrosion control inhibitor. Public water systems sometimes use modeling to inform corrosion control. EPA researchers recently looked at how well these models were predicting what is happening in the real world.

Water systems in EPA’s Region 5 - comprised of Minnesota, Wisconsin, Michigan, Illinois, Indiana, and Ohio - shared lead service line pipes and water quality data with EPA researchers. Actual pieces of pipe were taken out of the water systems and sent to EPA where scientists examined the pipe scales, the materials that build up on the inside of pipes. These pipe scales reveal chemical characteristics that reflect the chemical and physical processes occurring within the water system including the release of lead into drinking water.

Once EPA researchers cut open the pipes and took the scales apart, they examined each layer of scale and the minerals that were present. Different minerals have different inherent solubilities which clued researchers in to which minerals may be dissolving into the water. EPA researchers looked at which minerals were predicted to form based on the modeling, and then looked at pipe scales found on the lead service lines from those systems to see which minerals really were forming.

EPA and other outside organizations have applied predictive solubility models to try and help systems pick the right corrosion control treatment that fits their system’s individual needs. These models provide guidance regarding which mineral phases are predicted to control lead release in a given environment. EPA’s model uses parameters like alkalinity and pH to predict which mineral would be expected to form in the lead service lines of a water system and how much dissolved lead you would expect to find in the water.

The researchers, including EPA’s Jennifer Tully, Mike DeSantis, and Mike Schock, found various lead minerals, and other non-crystalline materials forming on the inside of the pipes. They discovered that there was almost always a mix of different lead minerals present in the scale. A little more than half of the lead service lines they looked at showed that the minerals present were not the same minerals that the models were predicting would be present.

Next, EPA researchers looked at water quality data from several systems that had supplied lead service lines for analysis. Since the pipe scales showed that the models were not always predicting the right mineral composition, the scientists wanted to see how well the corrosion control was working. What they found in limited sampling was that the models often have difficulty predicting real world scenarios due to the complexity of corrosion control, and this study shows the need for further evaluation and water sampling beyond just modeling to ensure that systems are using the correct treatment to keep lead out of drinking water.

These non-crystalline components were found in systems using each type of corrosion control. This finding represents an unknown, and since you cannot model the solubility of an unknown compound, it cannot be determined what role these non-crystalline substances have on lead release from lead service lines.

There is a lot more to learn about what goes on as our water flows through pipes and mixes with various corrosion control treatments and EPA researchers are working hard to understand how all these compounds mix together in the real world to help protect human health.