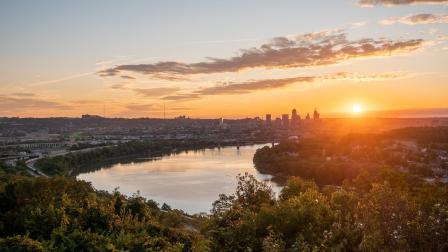 EPA researchers are partnering with Cincinnati’s Cooper Creek Collaborative to improve water quality in the Cooper Creek Watershed. As cities grow, meadows and forests become buildings and pavement - a change that can impact our streams, rivers, lakes, and groundwater, also known as urban hydrologic alteration. Most buildings and pavement are impervious surfaces, which means they cannot absorb rain water. Instead, this water (often called runoff or stormwater) runs down the impervious surfaces until it reaches a collection point, like a storm drain. In the water’s journey across the impervious surface, it can collect various contaminants, such as fertilizer, bacteria, motor oil, lawn chemicals, and pet waste.

The Cooper Creek Collaborative brings together several local and federal agencies, including EPA researchers, as well as state universities and community partners to address urban hydrologic alteration to improve water quality. They are also developing best practices to contain potential contamination in the Cooper Creek Watershed in Cincinnati, Ohio.

EPA scientists participating in this project are integrating and retrofitting urban stormwater infrastructure networks with technology to improve water quality and moderate flows. This technology could help contain and treat pollution in the event of a large-scale contamination event, like an industrial spill or the aftermath of a natural disaster. This is important because in such an event, storm water could potentially spread the contamination through the entire watershed, increasing the risk to health and the recovery time. Options are being explored to close-off portions of the network, which would allow contaminated water to be secured until it could be treated or removed.

EPA researchers are also investigating ways that pollution can be mitigated upstream, downstream, or in-line with stormwater and sewer collection networks. Some of the initiatives EPA scientists are working on include retrofitting detention and retention basins to slow the rates at which stormwater is being discharged to the creek, as well as treating the water in the storm drainage pipes to improve water quality as it is entering the streams.

“Not only is urban hydrologic alteration the most widespread cause of biological impairment, it is also the most foundational,” says Adam Lehman, Stream Specialist with the Hamilton County Soil & Water Conservation District and Coordinator of the Cooper Creek Collaborative. “If the stream dries-out, there will be no fish to care about the water quality. If the habitat is lost due to sedimentation from eroding banks, there will be no place for aquatic organisms to live.”

Urban hydrologic alteration is defined by two primary symptoms. The first is “flashy flows”, or flash flooding of creeks and streams caused by high levels of impervious surface. Flashy flows lead to mobilization of the streambed--also referred to as erosion. Streams are naturally erosional systems, meaning that in a natural setting in this region, events mobilizing the bed of the stream occur approximately once per year on average and the organisms that live in the streams have evolved to cope with these disturbance events.  However, when the hydrology is altered and these events begin to occur several times a year, the erosion destabilizes streams and leads to damage of creek-front property, threats to public and private infrastructure, danger to the biological diversity, and a high level of sediment pollution.

Over time, this increase in the frequency of erosion events can lead to incision, or down-cutting of the channel. This deepening of the channel enables the stream to hold deeper flows; as the water in the channel gets deeper, the erosional force exerted on the streambed increases (which results in even more down-cutting!). Streambeds affected by this cycle of increased mobilization events are typically characterized by steep, vertical banks that are unstable leading to excessive streambank erosion and contributing excessive sediment pollution to the system.

“Imagine being a fish, salamander, or insect hiding under a rock when the streambed substrate starts to mobilize!” says Lehman. Lehman explained that urban streams impacted by “flashy flows” tend to be able to still support macroinvertebrate species that have multiple life cycles per year, as these species have the opportunity to recover from these events but struggle to support macroinvertebrates with life cycles of a year or more.

The second symptom of urban hydrologic alteration are dried-out creek beds. A lack of porous ground dries out streams within the Cooper Creek watershed because the impervious surfaces prevent rainwater from soaking into the soil, recharging the groundwater, and being slowly released into the streams between rain events. This not only decreases life in the streams, but also in the entire ecosystem around them. Without fish, frogs, and other aquatic creatures to hunt, other wildlife in the area no longer have a food source.

“It’s very important to improve the water quality in the watershed,” said EPA scientist James Goodrich. “A stormwater emergency response capability integrated into urban infrastructure can not only mitigate an incident, but also improve urban water quality on a daily basis.”

These projects will help not only to restore the Cooper Creek watershed, but to protect it against future contamination and further urban hydrologic alteration.